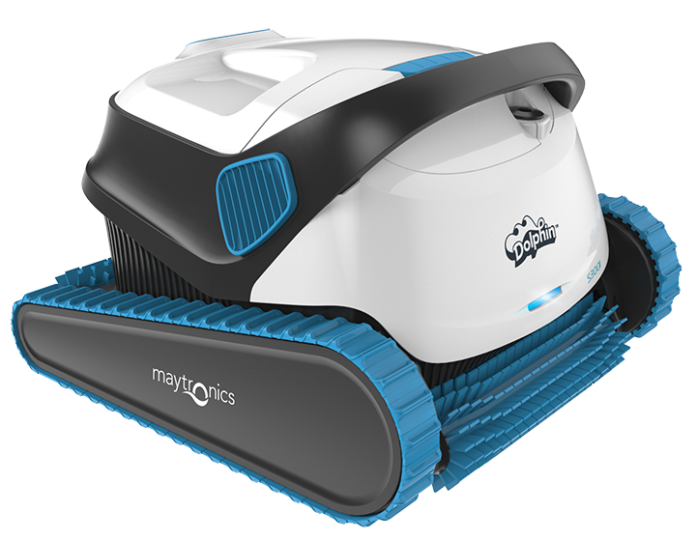 The Maytronic S series (and Active that it’s cloned from) are probably the best robotic pool cleaners on the market. The Flagship “i” variants, Active 30i, S 300i et al, are a bit strange though. While they share all the good points of the prior day bots, they don’t add a ton of features yet raise the price a bit. It makes reviewing them a little schizophrenic.

The reason for the clones in the Maytronic arsenal is due to aggressive expansion from the Separatists, no, it’s due to exclusivity deals. Maytronics promises certain bots to different online and offline retailers, and gets around thee deals by re skinning the bots to sell elsewhere. Bad for the companies in question, but unquestionably good for consumers, so long as you do your homework. Being able to find the lowest price in the bot range you want is excellent in terms of consumer power.

The S 300i is a high quality machine, much like the Active series before it. There are a few bots that feel a little flimsy in the Dolphin stable, looking at you DX2, but this is not one of them. What you want is a flush build. All the parts should be fitted tight, and sometime that is not the case.

I have said it on numerous occasions at this point, but I am in love with the design of the Actives and S series. They look cool, and that is not something the vast majority of bots can claim, the old Breeze bots from Aquabot come to mind, and arguably the Nautilus from Dolphin, but that is about it. The vast majority of robotic pool cleaners look like day-glo tanks, and not in a kitschy good way. Here we have simple curves and a pleasant blue, black gray contrast. The side vents are positioned in an aesthetically pleasing way too, they are there to vent the water when it is being taken out of the pool. Considering the sheer number of robotic pool cleaners that do the same thing at the same price point, not to mention all the clones of the different bots on the market, buying a nice looking bot becomes one of the more important deciding factors. Well, not one of the more important ones, but it is up there. My vote goes to the S series.

I have been reviewing these robotic pool cleaners for a very long time. I might be coming to the end of the series, but the things I have learned will stick with me for a long time to come. I have broken down these reviews into sections, and in each section there are things I look for, whether it is the core feature set I have devised, or ease of use features that make day to day use a breeze. In this section we look for strong cleaning power, impressive water filtering and the ability to climb a wall. The S 300i is one of the most fully featured bots on the market, so it hits all three points in the features and specs section, and has a few more tricks up its sleeve besides.

I always look out for something that off sets robotic pool cleaners propensity for tangling, and here we see some swivel tech. Big fan of that, it moves in sync with the bot to prevent the cable wrapping around itself, thus stopping the cycle. There are few things more annoying than having to reset a cycle. The on board filter pump is one of the most impressive on the market too, a robust 3,735 gallon per hour monster. It filters the pool fast and leaves the water looking crystal clear.

Don’t get me wrong, their past brush systems have worked, but here there is an obvious change with bottom brushes. The bristles are softer, meaning the bot is less likely to leave scour marks on tile. This lets is break up debris far faster. This speed increase comes across well in its 1 hour speed cycle mode. Most other speed cycle modes are fine, but here you could nearly just use it all the time. There are more deep clean options, a 2 hour cycle and a 2.5 hour cycle, but it is unlikely you will need them too often.

The bots most impressive feat, in my opinion, is its ability to climb the pool wall. I love a bot that can make that 90 degree transition and clean to the brim. I really don’t see the point in a bot that can’t do it, after all, we are buying robotic pool cleaners to save us time, and how does having to  manually clean your pool wall save you that much time? Bonus features here include a free caddy and remote control options.

The caddy is great, makes moving it around very easy, and the remote options are via Bluetooth, so you can control the bot from a phone, or a fridge if it has Bluetooth. There is no dual drive motor though, so don;t expect true 1:1 control. The weekly timer feature is limited by the lack of full filter indicator. All of those features are shared with the S 300 though, so what makes the S 300i unique? Not much to be honest. It has a delayed start feature, this allows sediment ton rest leading to a more effect clean, and the warranty is better, but more on that later.

Overall this is a fine bot, but the lack of any real differences between it and the S 300 makes it difficult to recommend over the latter. I cannot fault the core design nor the features present though.

Maytronics Dolphin S 300i Ease of Use

The core design of a robotic pool cleaner can tell you a lot about the day to day use of the bot. I have found that they fall into two broad categories. The external models do not come with a pump, and must be connected to a pool pump. It makes them harder to set up, but in some cases free to run. The complete models come with a pump, and so using them is much easier, even if you do have to pay for the power costs. In the all in one camp there are two further categories. The legacy models, that use bottom mounted filter chambers and bags, and the Ultra Moderns that all use top loading filter chambers and filter meshes instead. The legacy models all work fine, even if there are a few day to day annoyances about using them. The Ultra Moderns fixed a few of the problems, but have a few of their own. The S 300i does away with all day to day annoyances of using a robotic pool cleaner with its filter canister.

The legacy models all worked fine, they cleaned a pool well and using them was easy, having to flip the bot over to replace the bag was a chore, as was cleaning the thing, but on the whole they were okay. Ultra Moderns tend to have top mounted chambers, and so replacing the mesh was incredibly easy, but then you had to clean out the mesh and the bot, which was less so. The New filter canisters can be removed whole sale from the bot and simply hosed down. It means day to day use goes something like this. Plug the bot in, drop it in the water, set the cycle, let it clean, take it out of the water a, remove the canister, hose it down, replace the canister. Done. The change is so revolutionary that I have taken to calling them the first Post Ultra Modern bots.

There really aren’t any issues here. I mentioned that even the older Legacy build were easy to use, and that is true, so I had taken to using this section to discuss minor issues with the design of the bot. But the S 300i is probably the best designed bot on the market right now. I expect to see more firms jumping on this design innovation soon.

Now to the price, and for me it is here that the S 300i falls a bit short. The differences between the S 300 and the 300i are very limited, and the price difference is not insubstantial. On average you can expect to pay around $1400 for this top of the range robotic pool cleaner. That said you can usually find some pretty good deals by clicking here.

There is another price to consider. The running costs, and unlike the old school external filter models, that tend to have built in hydro electric power generators, the S 300i will cost you a little cash for every hour of use. An average cycle will cost you close to 14c per run. Not a huge cost, I admit that, but it is one that will add up, and if you use the bot often you will feel the sting of a few dollars per year. I mostly bring this up to highlight the growing cost of our electronics, I don’t know about you, but I have all manner of power hungry devices in my house. Better to consider the long term costs.

I love reviewing warranties, some of the ones I have had the good fortune to peruse have been hilarious, ridiculous what some firms get away with in the fine print. With the S 300i I have been unable to provide an in depth analysis, as Maytronics have yet to send it to me. I have contacted them about this, asking for their bumper to bumper, full and limited warranty terms and conditions, but they have yet to reply. I am a little non plussed, I assume they want to give their customers all of the information they need to make an informed choice. In the end all I can tell you is that the S 300i comes with a 24 month bumper to bumper warranty. With cars this means parts and labor, but I am unsure as to how bumper to bumper applies to a robotic pool cleaner.

In so many little ways the S 300i is the best robotic pool cleaner on the market. It benefits from excellent design, a whole host of useful features and one of the most easy to use builds on the market right now. Where it falls down is its inability to really disassociate itself from its peers. It has one or two more features over the S 300, but no enough to really make it worth the extra cash. The S 300 has the same problem, a few extra features over the S 200, but not enough to justify the price for me, though some folk may insist on the remote control options, I find them unnecessary, and isn’t that the point? Overall and excellent bot, marred a little by a lack of any really stand out new features.

To see all the current discounts and deals available click here.