We’ve previously seen Aaron Marino on the Shark Tank, promoting his men’s personal development and lifestyle DVD’s. When his Alpha M episode aired, he only sold one copy. Aaron stopped concentrating on that particular business model and began to focus on building his brand on YouTube and social media. He came up with new hair products that he marketed through those channels and turned again to the Sharks to help give Pete & Pedro a boost. Would the Sharks bite this time? Let’s take a look.

Aaron Marino, formerly of Alpha M who was featured in season 4 of Shark Tank, walked out onto the stage. He introduced himself to the Sharks and requested $100,000 in exchange for a 10% equity stake in his new company, Pete & Pedro. He let the Sharks know that he had been there before, and Mark greeted him in recognition. Aaron admitted that his previous idea did not work, and tossed a copy of the Alpha M DVD behind him.

Aaron claimed that the rejection from the Sharks gave him the new direction that he needed to come up with the best selling product at a lower price point. He said that he got the idea for Pete & Pedro about a month after appearing on the Shark Tank that first time as he was styling his hair. Aaron repeated the tagline on his marketing – Pete & Pedro equal Bueno Hair. He told the Sharks that his hair product was high quality at a great price. Aaron introduced the concept of the Bueno Hair Club, where a customer could get their favorite products shipped to them automatically 4, 6, or 8 weeks. Aaron insisted that he had a great product now, and he was not walking out of the Shark Tank without a deal. He asked the Sharks who was ready to “partner with him, and share the hair?”

The Sharks all laughed as Aaron handed out samples. Mark cruelly joked that Aaron had only brought four samples, leaving out the mostly bald O’Leary. Aaron mentioned that there were six different styling aids, in addition to shampoo and a conditioner. Barbara told him that it was delicious, and Aaron told her it was the scent of a freshly bathed tiger. The Sharks all giggled. Kevin let Aaron know that he was part of a very exclusive club – not many entrepreneurs can make it back on the Tank. Kevin wanted to know how quickly Aaron’s other business venture tanked.

Aaron stammered and said that he thought he would still do fine without getting a deal since he was able to promote the product on national TV. However, that turned out not to be the case. He only sold a single style system the night his episode aired. Kevin rubbed it in his face that the Sharks were right, and that the idea “went to zero.” Kevin went on to say that failure was part of the success of a great entrepreneur. He wanted to know what made Pete and Pedro so different. Aaron stated that he was able to bring the company to a million in sales in two years. Kevin looked shocked and wanted to know what his sales looked like for the month. Aaron told him that Pete & Pedro was making $55,000 in the current month. The Sharks all looked quite impressed.

Aaron told him that that number was climbing at 15% per month. Robert wanted to know how he was able to achieve that level of success. Aaron said to him that many of his sales came from his Youtube account where he showcased content about grooming and hairstyles to his 600,000 followers. Aaron insisted that he got 5.5 million views a month on the channel for Alpha M, and his website. Lori told him that he was hilarious, but wanted to know what made the business so special. Aaron said that it was the products themselves that were the major selling points.

Mark started to ask how many views his typical videos got, and Barbara began to speak over him to ask how many videos he typically posted. Mark waved his hand at her and stated that he wanted to finish. Barbara told him to go on but said that she did not like it when he waved his hand down on her. Aaron told Mark that each of his videos gets about 75,000 views when it first goes up. Pete & Pedro had a conversion rate of 9%, which Kevin demanded was false. Mark stated that he believed it, but Kevin insisted that it was too high. Mark said that sales conversions from YouTube were typically that high. Barbara wanted to know if he was making money from his YouTube videos, and Aaron let her know that he got money from Youtube ad revenue, as well as sponsorships from the brands themselves. He’s gotten sponsorships from JC Penney, as well as Chevrolet. Aaron said that he was in talks with other brands. Barbara wanted to know how much he got paid from the Youtube videos as opposed to Pete & Pedro’s sales revenue. Aaron said that he keeps the two separate as two different businesses.

Robert asked how much he got from the endorsements, and Aaron said that he made $600,000 in the last year. Barbara asked if he was including that business in the deal that he was making with the Sharks, and Aaron said that he wasn’t, but it shouldn’t be a problem. He has credibility, and he would be responsible with someone else’s money. Mark said that Aaron was an excellent salesman, and he was the real product, not Pete & Pedro. Kevin told him that there was not another way to do it than using both businesses in the equation. It was impossible to divide up the equity without knowing how Aaron was allocating his time. Aaron insisted that the content creation was a huge part of selling the products. Kevin started getting upset. He slammed the jar he was holding down on the table and asked why he would want his entrepreneurs doing anything that would not make him rich. Aaron said that it was a byproduct of him doing the videos. Kevin still wanted him to combine the businesses so that he would make 10% of all the cash that Aaron brought in.

Aaron sarcastically told him that the whole thing sounded great, but wanted to explain more about how he was going to make money. He started going on about how he was an influencer, and Kevin cut him off, saying that it did not matter. Aaron told him that it should because he made millions of dollars that way. Kevin stated that he did not want Aaron doing anything else if he were to invest. Mark interjected that Aaron could be the next Paul Mitchell, but both businesses needed to go hand in hand. Aaron said that he understood. Kevin started to make him a deal. He offered Pete & Pedro $100,000 in exchange for 20% equity in the combination of that and Alpha M. In return, Kevin would help out, and drive traffic to the videos and the Pete and Pedro website. Aaron appeared to consider as it cut to commercial break.

Aaron said that it was a haircut. Lori told him that she understood that Aaron was a great salesman, but she could not get behind the product. She went out. Aaron thanked him. Robert told him that he’s proved that he can drive traffic and sales conversion since the last time he appeared on the Shark Tank. He stipulated that there were a bunch of other products, and he was concerned that Aaron would file any other products that he started selling under Alpha M to avoid having to give away the equity. Aaron said that he needed help and was willing to merge the two if it would aid him in getting a deal. Barbara stated that she did not believe that he needed help from the Sharks in attracting customers since he had the charisma and the magnetism to make the business work. What he didn’t have was the structure and organization she picked up from 30 years of running a company. She offered him $100,000 for the Alpha M social media side of it in exchange for 10%. She insisted that Kevin would just make him miserable.Robert offered him the same deal as Kevin, insisting that Kevin wouldn’t offer anything to the business.

Aaron said that he would not take Kevin’s offer. He would consider Barbara’s, but he wanted $300,000 for that 10%. Barbara told him that she would be willing to make that offer if he could convince someone else to go in with him. Aaron asked Mark to go in, but there wasn’t enough equity for him to consider it. Robert said he would give him $100,000 for 10% for Pete & Pedro, and any other products he brought on down the line. Aaron refused and looked back to Barbara. He offered $100,000 for 10% of Alpha M, and she wholeheartedly agreed. She called him smart and good looking. After Aaron had walked off, he expressed surprise that they didn’t go for the product he was pitching, but he was willing to sell himself. Back on the Tank, Robert told Barb that she didn’t really know what she bought. She insisted that she made a smart decision. Let’s see how that turned out. 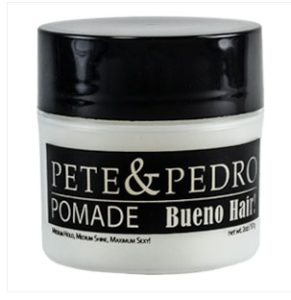 According to Aaron’s website, the deal with Barbara for Alpha M. was never signed. After the excitement from Shark Tank died down, Aaron decided that he wanted to maintain his right to say no to promoting products that he doesn’t like. Both the Alpha M and Pete & Pedro Facebook pages are still super active. As of November 2016, Pete & Pedro was still offering a 20% Shark Tank discount, which you can get by entering posttank20 at checkout at their website.