The Spooner Update – What Happened After Shark Tank 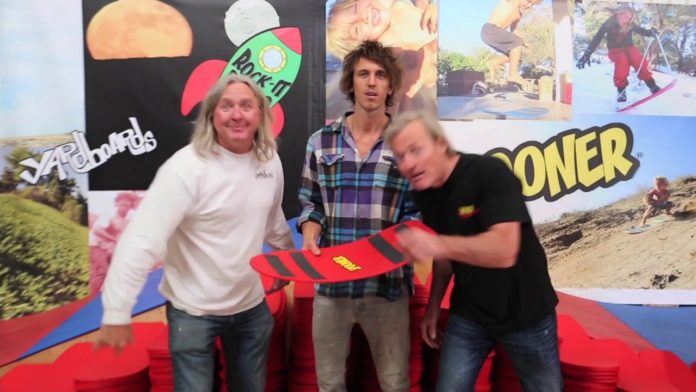 The Spooner Before Shark Tank

A few years ago, Randy owned a small surf shop. He decided that he wanted to make something new, so he picked up his saw and cut it up to resemble a skateboard deck. He made six others and tried attaching wheels to them. The wheels ended up being a flop, but children saw the board as a toy. They began to climb on the board, and starting spinning on them, and jumping. The Spooner was born. Would the Sharks be on board this idea, and make an investment? Let’s take a look.

The Spooner on Shark Tank 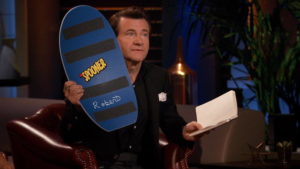 Randy Putland, Bernie Miller, and Ruben Guymer walked out into the Shark Tank carrying what looked like small surfboards. They introduced themselves to the Sharks and told them that they were looking for $400,000 in exchange for 16% of their company, The Spooner. Reuben presented the board he was holding and called it The Spooner. He explained that it was a board that lets the user practice for skateboarding or snowboarding on any surface. He demonstrated on the stage carpet, and it allows you to do flips, jump, and make a surfing motion.

Randy was up next, saying that The Spooner was a kid favorite. He started to claim on his board as he explained that it would aid in developing balance and coordination in children. The kids would have fun as they experimented, and made up their tricks. Bernie tossed a board to Reuben, exclaiming that he was internationally known as the best at the Spooner. Reuben got on the Spooner and started to do spins on the carpet. Lori laughed as he took a pratfall off of the Spooner. The other two entrepreneurs wrapped him up in a blanket and said that he’d be alright, but Reuben protested. He got up and stated that he still had to get up and ride the Yardboard.

Reuben climbed onto the edge of the makeshift ramp they had on the stage and called for a helmet. Bernie tossed him one. After Reuben caught it and put it on, Randy handed him the Yardboard. Reuben explained that it was an “all-terrain downhill slider.” Reuben said that he liked the snow the most, but it would also work on the ramps, dirt, and grass. Reuben stood on the board long-wise, with one foot on each end. He held onto a rope that was attached to the sides. Reuben did some tricks on the ramp, but it did not have the same momentum as a skateboard.

Randy said that The Spooner was for kids as young as three. It allowed them to practice moves that would enable them to graduate to harder tasks, such as snowboarding or skateboarding. Reuben said that they were willing to make an exception to their rule of staying away from Sharks when they’re surfing. He finished the presentation by asking who wanted to jump aboard the Spooner Team. Randy handed out a board to each Shark.

Lori asked if the board was simulating going down a skateboard ramp or going down a ski slope. They agreed that it was. Kevin wanted to get down to business. He asked them how they started, and Randy launched into his backstory. He told the Sharks about the origin of the Spooner, and how the kids that came into his surf shop started playing with the prototype. Kevin asked what happened after that, and Bernie said that they sold $56,000 of The Spooner in the surf shop in almost six weeks. Lori asked if it was Christmas season, and Randy confirmed that it was. Kevin wanted to know if they were demonstrating the boards because he couldn’t see people knowing what to do with them.

Bernie said that they’d set up 50 boards around their sales kiosk, for demonstration and for the kids to try them out. Barbara asked what the cost was for one board, and Reuben said that it was $45 for the small one and $55 for the large one. Barbara asked what their sales margins were, and Randy said that the small one costs $12 to make, and the large one was $12.50. Kevin told them that they had excellent margins, and Barbara agreed. Kevin asked what their sales volume was for the year, and Randy said they did $1.7 million in sales last year, and they were on point to do $1.8 million this coming year. The Sharks also seemed impressed.

Kevin asked if they sold the most online, and Reuben said that they do a majority of their sales in specialty retail stores, and toy stores. He stated that it works out since little kids could get on the board and see what it could do. Robert asked how they were able to achieve their impressive sales numbers, and Randy said that they debuted The Spooner to the public at the New York City Toy Fair. Lori told them that their current display looked impressive, and asked if they had the same on for the toy fair. Reuben said it was similar, but it was larger. Randy clarified that it was a thirty foot one. Bernie stated that they started off in physical education programs since they could not afford to get into the Toy Show. They sold some them to the schools, and it would be enough for them to pay the rent.

Barbara inquired about what they would do with the money, and Reuben said that they wanted to branch out from their niche in the specialty toy market. Kevin explained that the New York Toy Fair is not a specialty toy fair – it’s something that most major retailers attend. Robert said that there must have been a big box retailer that attempted to bring them in. Randy said that Toys R Us tried to get them, but they were afraid to take the deal since it required so much money to get into. Lori asked if they felt like they would be overextending themselves, and Reuben said that that was the case.

Kevin wanted to know what each of them did to manage the business. Randy said that each of them wears a lot of hats. They handle all of the manufacturing and distribution in The Spooner warehouse. Bernie deals with the manufacturing aspect, while Reuben is the sales manager. Randy himself was the CFO. Robert said that they have a fantastic business that makes money and also allows them to do what they loved to do. He continued, saying that bringing in an investor would change everything. It would mean that part of the business would not be theirs anymore. Robert asked them if that was something that they wanted to do.

Mark said that it would mean a change in lifestyle. He invested in another surfing company, and the sales started to go up and so did the amount of time and effort that the entrepreneurs had to put in. Mark said that it got to the point where those business owners took a step back and said that they just did not have their lives anymore. They ended up paying back all the money plus a return and started running the business at their pace again.He said that he did not think that Bernie, Reuben, and Randy were ready to make that change.

Barbara cut in and stated that she wanted to make an offer. She offered $200,000 in exchange for 8%, but she wanted another Shark to be in for the balance. Bernie and Reuben told her that it sounded great. Barbara said that she thought that they were ready because they did not sign up to do business with Toys R Us for the right reasons. Kevin said that he was interested in partnering with her, but Barbara said that she would be willing to work with anyone else but him. Reuben stared at them open-mouthed. Kevin stated that he would structure a deal differently. He did not believe that they should give away any equity since they’ve been working with each other for so long. Kevin said that he would provide them with the $400,000 in $100,000 increments, and they would pay him back by giving him $2 from every board sold. He would want a total of $800,000. Kevin said that if someone bought the company, he would want a 3% option, but he would not get any voting rights at all.

Barbara told them that it was pretty complicated, and asked the business owners if they would like to call their accountant before they made a decision. Kevin said that it was very simple. Robert stated that the advantage of that deal was that Kevin would not be a shareholder, but he would be like a grim reaper figure. Kevin said that any banker would require a return. Reuben asked if he thought that double the money was a high ask, but Kevin said that it would take him almost five years to get it back. Lori stated that they were looking for a strategic partner. Barbara said that Mark would like to go into the deal with her at 8% for $200,000. Mark said that they would have to give them an answer immediately. There was chaos among the Sharks as Lori tried to get another off out, and everyone was talking over her.

The three business owners of The Spooner talked amongst themselves. Bernie told them excitedly that they accepted Mark and Barbara’s offer. Lori looked a little disappointed as Mark and Barbara went up to shake hands. Bernie said that they were thankful for all of the feedback, and they walked off stage. Let’s take a look at how they are doing now.

The Spooner Now in 2018 – The After Shark Tank Update 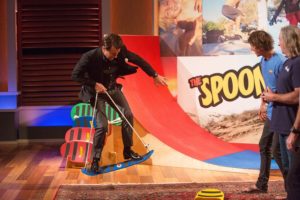 Since they appeared on Shark Tank, The Spooner guys have been hard at work. From their Facebook posts, it looks like Reuben is still going out and demonstrating these boards himself. They’ve attended a few more toy shows to get their product out there, such as the ASTRA Toy Show, a specialty toy show in Chicago, IL. They’ve also developed a new product called Surfloor Tiles, which are sensory tiles where the colors swirl and move when you step on them. If you’d like to purchase these products yourself or find a retailer near you, just head over to their website.