What Happened to Kevin Eubanks – 2018 Update 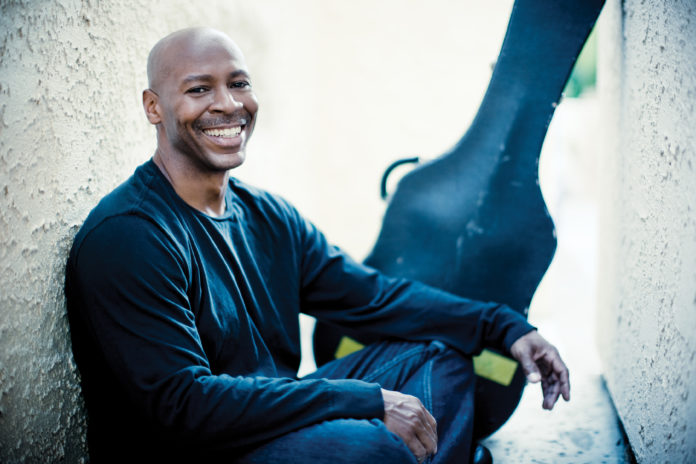 Guitarist, jazz composer, and even 2007’s “World’s Sexiest Vegetarian Man” award winner, Kevin Eubanks is perhaps best known from his long-time stint on the Tonight Show with Jay Leno. But through the decades, he has had much more to offer than some smooth grooves and witty remarks back to the host of the late-night show. What has Kevin Eubanks been up to in 2016, though? Here, we intend to find out.

Born into a musical family, Kevin Eubanks was raised in Philadelphia, Pennsylvania with his mother being a gospel pianist and organist, his brother older brother playing the trombone, and his uncle being a jazz pianist. While in elementary school, Kevin would start out learning to play violin, and piano before also incorporating the trumpet alongside his younger brother Duane. His musical skills would only grow as he would attend Berklee College of Music, where he would refine his musical skills, especially that of his new-found passion, the guitar.

After graduating Berklee, Eubanks would move to New York to follow his dream and family tradition of being a jazz musician. Primarily performing in jazz clubs throughout New York City, Kevin would have the chance to team up with jazz legends Roy Haynes and Sam Rivers, among many others. Only a year later, his skills would be recognized as worthy of international attention, as he would be recruited by the State Department of the United States to go on a sponsored tour of India, Pakistan and Jordan.

Upon returning from this set of tours, he would release his first album at 25 years old. Called “Guitarist” and released via Elektra, this album would only carry three tracks, but would secure Kevin a deal for 6 more albums to be produced. During his career as a solo artist, he would end up creating a total of 11 albums, as well as contributing to over 100 recordings.

As a decade would come to pass, Eubanks would find himself heading to the west coast, to try his hand at a position on the Tonight Show Band. Quickly gaining the respect of his band mates, it would only be a short three years before he would transition from strictly a guitar role to leading and composing for the entire outfit.

While certainly given respect and due credit within the Jazz community well beforehand, Eubanks would find most of his mainstream fame as a result of performing for Jay Leno’s Tonight Show for nearly two decades. While primarily seen as a performer, he did also compose the closing theme for the show, appropriately named “Kevin’s Country”. For the first four years of his work on the Tonight Show, he would also release 5 albums, before taking a 5 year break from recording. After this break, he would go on to record 7 more albums before 2010, 6 of which on the Insoul label.

Due to both his performances on the Tonight Show and his many releases, Kevin would be invited to join the Broadcast Music Incorporated Artistic Advisory Panel in 1999, a position he holds to this day. He would also gain an award from the non-profit in 2005 for his continued work. During that same year, he would also gain an honorary doctorate from his alma mater Berklee, for his contributions to the art of jazz.

After taking off from the Tonight Show in 2010 to work on his own musical projects, he would soon team up with fellow ex-Late Show musician Marvin Smith. In 2013, the pair would end up back on the Tonight Show stage, being the featured artist in a February episode. This would be concluded with a friendly reunion and interview with Jay Leno.

After leaving the Tonight show for a final time, Kevin would focus on two very important causes to him: His music, and education. While seeming to have an unending work ethic and schedule, he would also be seen teaching music classes in his native Philadelphia, as well as remote locations such as Canada and even Italy. For these ventures, he would often be joined by his brothers Robin and Duane, greatly accomplished musicians themselves. Recently, he has also been an active advocate for music education, stating both the cultural and economic importance of such ventures.

In 2015, Eubanks would team up with Stanley Jordan to release the album “Duets”, which is still just concluded its tour on May of 2016 after a long European leg. Often touted as relaxing, engaging, and even revolutionary in its use of guitar work, the 10 song album is definitely one of the best in recent decades, and certainly among the top that Eubanks has released. As of October 2016, Eubanks has taken to performing in smaller venues and festivals to end out the year, as well as appearing on the Orrin Evans album “Knowing is Half The Battle”. While perhaps gone from the late night talk show scene, it is very clear that Kevin Eubanks, and is love for jazz, are far from done.