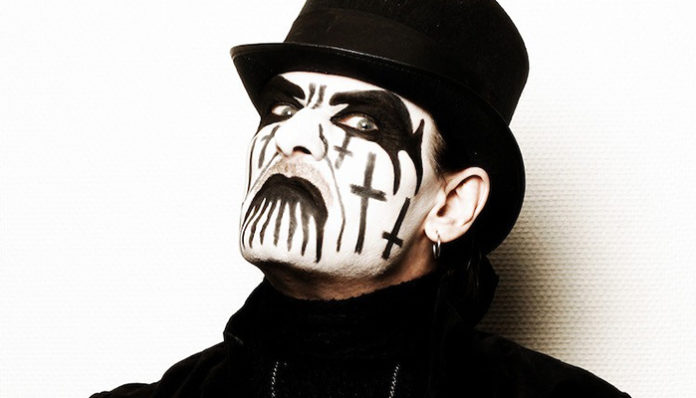 King Diamond is a musician who is perhaps best known for being the lead vocalist of the heavy metal band, Mercyful Fate. Drawn to hard rock artists such as Alice Cooper, he began performing with local bands when he was in his twentiesーhis first being that of Brainstorm which was founded in 1973. Shortly afterwards, he began to play with a Danish group called Black Rose in the mid 70’s; it was then that Diamond started to experiment with various horror-themed theatrics, something which ultimately helped to shape his malevolent stage persona. After leaving Black Rose, he joined a punk-metal band called Bratsーit was then that he crossed paths with future Mercyful Fate bandmate, Hank Shermann. Following the eventual dissolution of Brats, the two came together with their similar interests and started to work on a project which they called Danger Zone. Recruiting the help of guitarist Michael Denner, the two soon founded a new punk metal band called Mercyful Fate in 1981.

Quickly securing a recording contract with Roadrunner Records, Diamond and his band released their debut album entitled, Melissa in 1983. Part of the first wave of black-metal music in the 80’s, Mercyful Fate came out with seven studio albums, two extended plays and three singles prior to their split in 1999. Throughout their time together, they also embarked on a series of tours, the last of which was the supporting tour for their seventh album, 9. Following the dissolution of Mercyful Fate, Diamond and a few of his former bandmates founded a new heavy metal band under the moniker, “King Diamond” with new members, Andy LaRocque on guitar and Mikkey Dee on drums. From there, they signed with their former label, Roadrunner, and went on to work on their debut studio album.

A year after the eponymous King Diamond band was formed, they released their first full-length album entitled Fatal Portrait in 1986. Since then, the group has released a dozen studio albums, five singles, two EPs, and four music videosーthey remain active in the music scene to this date. At present, the band’s highest-charting album in North America is that of their third studio album, “Them“. Besides his involvement in the studio, Diamond has also been featured in a number of heavy metal-related television shows including Metal Retardation (2009), Metal Evolution (2012) and That Metal Show (2012). In 2006, the singer even lent his voice to a character in the animated series Metalocaplyse, one which centred around a successful death metal band.

So what has the accomplished heavy metal vocalist been up to these days? Is he still actively recording with his band? What happened to King Diamond? Where is he now in 2018? 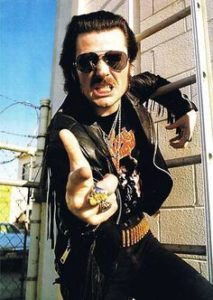 Born on June 14, 1956, in Hvidovre, Denmark, King Diamond (Real Name: Kim Bendix Petersen) was drawn to various hard rock music artists during his teens including that of American singer, Alice Cooper. By the time he was in his twenties in the 70’s, Diamond began front several local bandsーhis first being that of a heavy rock band known as Brainstorm, which consisted of Jeanette Blum, Michael Frohn and Jes Jacobsen. After performing with them for two years, he left the group in 1976 and went on to sing with a local Danish band called Black Roseーit was during this period that the vocalist began shaping his stage persona while experimenting with a variety of horror-themed theatrics. Before long, Diamond had part ways with the band again to join another called Brats; it was then that he met Hank Shermann, a future Mercyful Fate bandmate.

Although Brats enjoyed some success, their record label soon grew unsatisfied with their new material, which were notably “heavier” compared to their previous works. Consequently, the group disbanded as a result in the early 80’s. Not long after their split, Diamond was invited to help out with Michael Denner’s (a former member of Brats) project called Danger Zone. Together with a few former Brats members, they eventually formed a new heavy metal band called Mercyful Fate in 1981. Jumping right to songwriting, they produced a few demo-tapes and later signed a recording deal with Roadrunner Records, a major Dutch label. Prior to the release of the debut album in 1983, Mercyful Fate came out with an eponymous EP in 1982. Later completing the line-up with drummer Kim Ruzz and bassist Timi Hansen, they went on to work on their first full-length album. 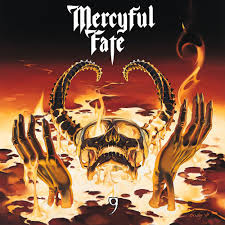 In the fall of 1983, Mercyful Fate released their debut studio album, Melissa under Roadrunner Records in Europe. Their first record to be made available in the United States, some of its material had its roots from the demo tracks recorded back during the days of Brats. Produced by Henrik Lund, the album showcased seven black metal tracks on its two sided disc, all of which featured lyrics that were written wholly by Kind Diamond. To support their new album, they also embarked on an European tour which began in the Netherlands in January 1984. A few decades after its original release, Melissa was re-released in 2005, with added bonus material.

The following year, the heavy metal band released their second full-length album entitled, Don’t Break the Oath in September 1984. Their first disc to chart in their native Sweden, it was noted for having incorporated a blend of heavy metal, satanic lyrics and a blend of progressive elements. Much more successful than their debut effort, Don’t Break the Oath received many positive reviews upon its releaseーmany praising it for its “satan-occupied black metal.” Peaking at number thirty-three on the Swedish Albums Chart, it consisted of nine tracks including A Dangerous Meeting, Night of the Unborn, Welcome Princes of Hell and Come to the Sabbath, amongst others. The album currently holds a nearly perfect score of four and a half stars at Allmusic.

After the release of Don’t Break the Oath, Mercyful Fate disbanded in 1985; it wasn’t until 1993 that three of its members, Diamond, Denner and Shermann reunited to work on music once again. Their coming together soon led to the release of their third studio album, In the Shadows which was released in June 1993. In contrast to their preceding works in the 80’s, the album revolved much more around conceptual horror-oriented themes as opposed to themes of the Occult and Satan. Although In the Shadows did not chart, it was fairly well received, having been giving a four star rating from critics at Allmusic.

Over the next few years, Mercyful fate went on to release a handful more full-length albums including Time (1994), Into the Unknown (1996), Dead Again (1998) and 9 (1999); of the four, only Into the Unknown managed to make its mark on the charts, having ranked at number thirty-one in Finland. 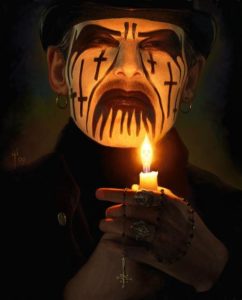 In response to the break up of Mercyful Fate in the mid 80’s, Diamond and his friends reformed themselves into a new band which they called “King Diamond.” In February 1986, the group released their debut album Fatal Portrait under Roadrunner Records in Sweden. Produced by Rune Hoyer, the disc came with nine heavy metal tracks, all of which were either written or co-written by Diamond himself. Often regarded as a transitional album, Fatal Portrait still featured satanically styled themes although it started to show signs of conceptual and theatrical elements. A few standout numbers from the album include the songs Lurking in the Dark, Haunted and Halloween. A commercial success, over 100,000 copies of the album have been sold within North America.

In February 1987, King Diamond released their second album, Abigail. The group’s first conceptual album, it saw nine tracks which told the story of a young couple who moved in into an old mansion. Recognized by many heavy metal fans to be a masterpiece, it has been regarded by many to be one of the band’s best concept albums. Praised for its lyrical quality and goth storytelling, it peaked at number thirty-nine in Sweden and at number sixty-eight in the Netherlands; it also reached number 123 on the US Billboard 200ーMaking Abigail the band’s first album to chart in the United States. To date, over 47,000 copies of the disc have been sold within the US.

The next year, the heavy metal band released one of their best-performing albums, “Them” in September 1988. Another conceptual album, it told the story about a king and his mentally-ill grandmother. Produced in part by Diamond, their third studio album featured eleven separate titles, a couple of which were eventually featured in the feature film, Clerks II (2006). Another successful hit, it peaked at number thirty-eight and at number sixty-five on the Swedish and the Netherlands Charts respectively; it also reached number eighty-nine on the Billboard 200, which was a significant improvement from their previous album, Abigail.

Throughout the next decades, King Diamond continued to put forth new albumsーa few highlights from the 90’s and 2000’s include The Eye (1990), Voodoo (1998), Abigail II: The Revenge (2002) and Give Me Your Soul…Please (2007). Their latest release is that of their compilation album entitled, Dreams of Horror which was made available back in November of 2014. 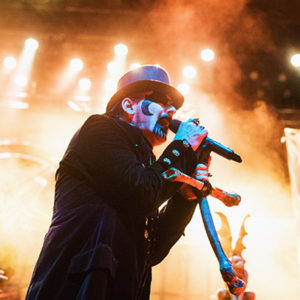 It’s been nearly a decade since King Diamond’s latest album, Give Me Your Soul…Please back in 2007, but don’t fretーif rumours are true, the heavy metal vocalist is back in the studio working on an upcoming studio album. In fact, according to a post on his official Facebook page, the singer has announced that he will be dedicating 2017 to producing a new album. Considering the fact that it’s still on his to do-list however, it’s probably fair to say that we won’t be seeing it in stores anytime soon!

In other news, King Diamond also recently hit the stage at a concert show at the Metro Arena in Espoo, Finland. At the event, the former Mercyful vocalist performed an eighteen-track set list including the titles Come to the Sabbath, Sleepless Nights, Out From the Asylum and Black Horsemen, amongst numerous others. A highly anticipated event for fans, video clips of the concert soon emerged online after the end of the showーmany of which have since garnered tens of thousands of views!

Speaking of heavy metal concerts, King Diamond has just announced that their 2015 US Abigail Concert Tour is in the middle of being turned into a DVD. Although the process has taken a little longer than they’d hoped, there’s no doubt that it will be worth the wait. As soon as the DVD is complete, fans will be the first to know via his official website so stay tuned!

If you’d like to stay up to date with the Danish musician, why not following him on social media? You can find the former Mercyful Fate vocalist on Twitter under his username @RealKingDiamond. Don’t forget to also checkout his official Facebook page if you’re a fan!