John O’Connor and Anusha Kambhampaty were living in NYC, and they noticed a problem. Since the city was really made for walking, and they lived in a fairly rainy climate, they often found themselves stuck in rainstorms without umbrellas. The pair decided to fix that problem by inventing an umbrella rental service that is also more eco-friendly. Would the Sharks be interested in this latest addition to the so called “sharing-economy?” Let’s take a look. 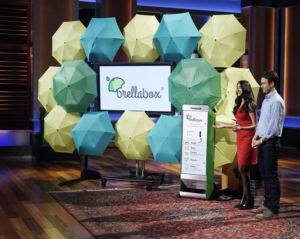 John O’Connor and Anusha Kambhampaty walked out into the Shark Tank, and onto the stage. They introduced themselves, and told the Sharks that they were looking for a $400,000 investment in their business, Brellabox, in exchange for 20% equity stake in the company. John asked Sharks what they do in a rainstorm, stating that their options were shielding themselves with their jackets, or running for shelter. They demonstrated shielding with a jacket by pretending to duck underneath something at the same time. John said that buying a cheap umbrella from a street vendor was even worse than those other options, because you would be wasting money on something that would break immediately. Anusha held up a broken umbrella to illustrate his point.

John informed the Sharks that people throw away enough umbrellas each year to build over 25 Eiffel Towers. Anusha said that their product, Brellabox, makes that idea possible. She unveiled a super size “phone screen” with the BrellaBox app pulled up as Mark Cuban chuckled at them. Anusha asked the Sharks to imagine that the BrellaBoxes were located strategically around the city, in places such as restaurants, hotels, apartments, subway system, and office buildings. John stated that it worked by using a credit or debit card to reverse a “high quality umbrella.” The user would enter either their email address or their phone number on the screen, which alerts the user when they need to return the umbrella. John said that the user would be able to return the umbrella to the nearest machine when they were finished using it. The app would assist the user in locating the nearest machine.

John said that the machine would eliminate the waste from so many broken umbrellas, and keep users from having to carry around an umbrella just in case it’s raining. John asked the Sharks who wanted to partner with them, and set aside some money for a rainy day. Mark laughed again as Daymond asked how much it costs to rent an umbrella. John let him know that it costs $1.50 to rent an umbrella for 12 hours. He told the Sharks that they’d been contacted by 23 universities. Chris Sacca, a guest Shark on this episode, asked how the universities were able to find out able BrellaBox. Anusha informed him that Brellabox was featured in the Wall Street Journal, and got a mention in the New York TImes. She insisted that the idea caught on well, especially in cities where people are constantly walking, and know what it’s like to get caught in a rain storm. Anusha said that they would purchase a street vendor umbrella, which would promptly break, continuing the cycle of not having an umbrella.

Mark told them that there was a reason that the street vendors would appear the moment that it begins to rain. He asked them what their sales looked like. John told him that they provided the universities with 15% of their profits, and they also bring in a 3rd party sponsor to put their name on the machine. He said that the umbrellas also can be branded for a sponsor company. Anusha compared it to citibike in NYC. Mark asked if they had any Brellabox kiosks in action at the moment. John said that they’ve been working on the machine, but they did have one placed at WeWork. Kevin groaned, and asked what that meant. Mark informed him that it meant that Brellabox was pre-revenue. Daymond covered his eyes, and laughed.

John did not look deterred. He told them that the BrellaBox kiosk that they put in NYC was their pilot run. While the box was there, there were sixteen rainy days in NYC over the course of three months. When it rained, 25 people came into WeWork, and used BrellaBox. Chris asked what the price was, and John told him that the pilot program was free. Barbara asked what the price of the umbrella would be if the customer failed to return it, and Anusha told her $40. Kevin asked if they’d invested any money in the business yet, and when John told him that they had, Kevin asked for a moment of silence for the dead money. This made Mark very amused.

John told Kevin that he should keep listening to the pitch to find out how to make money with the Brellabox since he loved money so much. Kevin told them that they were lucky to have met him because he was going to stop the madness. Kevin said that it was a hideous idea, and perhaps the worst idea he has ever heard on Shark Tank. He told them that he wasn’t trying to be cruel, but he did not want them to waste their lives on a bad idea. Kevin went out, but Anusha was not done with him yet. She asked him what he did in the ran, and Kevin told her that he picks up an umbrella from a street vendor for $5, and throws it out when the rain is over. Chris looked amused at her spunk, and told her to “get” Kevin. Mark told them that Kevin actually melts in the rain.

Mark started to ask what it would cost them, and John interrupted him before he could utter the full sentence. John stated that he could do a limited run of 50 machines in Kansas for eleven fifty. The Sharks asked him to clarify what he meant by eleven fifty, and John said that it would cost $1,150. He continued, saying that he could do $975 for 200 machines. Daymond asked if the price tag included the umbrellas, and John let him know that they did not pay for the umbrellas. He stated that he had a large umbrella manufacturer that provided the umbrellas for free. Mark said that was good, but Barbara questioned why the umbrella company would do such a thing.

John told her that if they could put the umbrella in BrellaBox, and it withstood the challenge of being a rental umbrella, it was consistent with the brand messaging of being the strongest umbrella. Daymond asked if John thought that he did not have to convert views into sales, since there was an added step of the user putting their credit card into the machine. He said that he himself would not take the extra step of doing that on a regular day, much less so in the rain. Kevin reminded him that he would also have to return the umbrella, or pay the price of $40. John piped up, pointing out that they were indoor machines, which I doubt was helping his case. Mark said that he looked at the situation completely differently, but Kevin interrupted him.

Kevin loudly asked Daymond why he would tell the entrepreneurs that it was a terrible idea, and Daymond asked him why he was yelling at him since it was not his company. Kevin said that he was worried about John and Anusha. John told him that Brellabox was a real startup, and that he was used to people shooting him down for it. Kevin said that the idea sucked, and he was unsurprised that other people were criticizing it. Chris grinned, and told the entrepreneurs that Kevin didn’t have to worry about his hair getting wet. Kevin told Chris to step up and fund the idea if he thought it was such a good one. Chris said that he lived in an area of California that would not see rain again for another 5 years, and his shirts were essentially rain proof. He went out, saying that he hasn’t suffered from the problem that they were attempting to solve in a long time.

Barbara asked the pair if they’ve actually taken an order from anyone yet, and Chris let her know that they have an order from Michigan State University. Barbara asked how many they were looking for, and John told her that they only needed one Brellabox. He said that they were also finalizing a contract for East Stroudsburg University for an initial four boxes, and if they worked out, the University would purchase an additional 16. Chris asked if the umbrellas were really better than what you would get at a street vendor, and John said that the umbrellas were of amazing quality.

As Anusha started to pass out umbrellas, John asked him if he would like to see one. Kevin told him that he would, but it did not change the outcome. He was still out. Barbara asked Anusha for one as well. Barbara touched the one she was handed, and said that she thought that the umbrellas were too nice, because it was a heavy, well-made umbrella. Mark reminded her that if she would decide to keep it, Brellabox would make $40. Chris agreed, stating that they already had the credit card on file. Mark said that the $400,000 investment that they were asking for was a lot of money for a company that had a lot of uncertainty. He said that he disagreed with Kevin – Mark did not think that it was a bad idea. John told him that they believed deeply in the business, but it did not matter. Mark was out.

Barbara said that there was a big problem with the business. They had to have a great number of Brellabox kiosks in order to have any legs to stand on. She said that they have to shell out a grand to put a box in a place such as a university, or Wall Street, and then they have to profit share with the university. Anusha said that would be where the sponsor comes in, but Barbara reminded her that the sponsor was not arranged yet. Barbara said that was a whole other layer of work that needs to be done in order to make the business profitable. Barbara went out, saying that the deal did not make any sense.

Daymond was the last one. Kevin told him to go ahead, and justify the idea by giving them $400,000. Daymond sighed, and said that he did not want to be disrespectful to the entrepreneurs who were clearly working hard, and believed in their business. Daymond continued, stating that it just wasn’t an everyday item. He went out. John and Anusha thanked them, and went out. Once they left the Tank, Kevin still insisted that it was the worst idea he’d ever seen in his entire life, and declared Brellabox to be evil. Chris Sacc informed him that he would have a “whole cult” of people posting wet Mr Wonderful pictures on social media.

BrellaBox Now in 2018 – The After Shark Tank Update 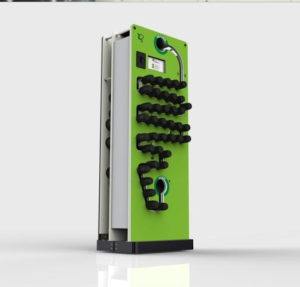 Since appearing on Shark Tank, BrellaBox has expanded into a larger pilot program in NYC. They also released the fifth generation of the Brellabox, and are looking to get a patent on their design. Perhaps Mr Wonderful would have been more receptive to the idea if he thought it was able to be patented. BrellaBox hs also secured a new deal with another University, the prestigious Penn State. The website states that they are also in contract discussions with other universities as well.