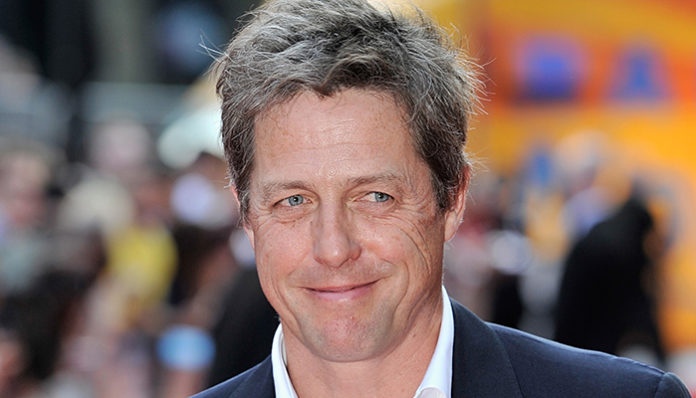 Award-winning actor, Hugh Grant first rose to international fame in the romantic comedy, Four Weddings and a Funeral in the early 90’s. Growing up, the British lad had always been fond of  acting. After graduating from high school, Grant enrolled at Oxford University, where he later joined the student drama clubーit was then that he made his acting debut in the film, Privileged (1982), a production by the Oxford University Film Foundation. Later that same year, he also starred in Bitter Moon (1992). Over the next couple of years, the aspiring actor went on to appear in The Last Place on Earth (1985), A Very Peculiar Practice (1986), and Lord Elgin and Some Stones of No Value (1986)ーmost of which were small, minor roles. Tired of going unnoticed, he soon formed his own comedy troupe called The Jockeys of Norfolk with a couple of friends. Performing at various venues, they eventually made it onto the BBC television series, Edinburgh Nights. As an actor, Grant didn’t receive his big break until 1994, when he was cast as the starring role in Mike Newell’s film, Four Weddings and a Funeral.

An unexpected success, Four Weddings and a Funeral effortlessly topped the box office after its release. Universally acclaimed, the popularity of the film also caused Grant’s popularity to soar into the skiesーit ultimately played a large part in propelling him into celebrity stardom. Although he was later caught in a scandal in the mid 90’s, it did little to derail his already flourishing career. Carrying on with his acting, Grant went on to star in a number of hit films including Sense and Sensibility (1995), Nine Months (1995), Notting Hill (1999) and Bridget Jone’s Diary (2001), to name a few. A distinguished actor, his success and achievements in the show business has not gone unrecognized; throughout this career, Grant has received numerous industry awards including two Empire Awards, two Peter Sellers Awards, a Hollywood Film Award, a BAFTA Award as well as prestigious Golden Globe, amongst countless others.

While he’s known for his live-action acting, Grant has also worked as a voice actor in Hooves of Fire (1999), Robbie the Reindeer in Legend of the Lost Tribe (2002), The Pirates! Bands of Misfits (2012), and So You Want to Be a Pirate (2012). One of the best known faces of Britain, the actor has been featured in an innumerable amount of talk shows over the years including The Panel (1999), The Rosie O’ Donnell Show (2001), The Tonight Show with Jay Leno (2003), Late Show with David Letterman (2009), This Morning (2012), and many others. To date, Grant has tackled over 50 different projects as an actor.

So what has the four-time Golden Globe Award nominee been up to as of late? What are some of the latest roles that he’s taken on? What happened to Hugh Grant? Where is he now in 2018? 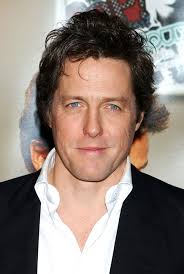 Born on September 9, 1960, in Hammersmith, London, Hugh Grant (Birth Name: Hugh John Mungo Grant) is the son of James Murray Grant, a carpet salesman and Fynvola Susan MacLean, a school teacher. Of English and Scottish descent, many of his past ancestors were distinguished members of the army during World War II. Growing up in Chiswick, West London, he always had a fascination for both literature and drama.

As a teen, he went to the independent Wetherby School for a few years prior to transferring to Latymer Upper School in the 1970’s. An avid athlete during his time there, he was a member of the school’s cricket, rugby and football teams. After graduating from high school in 1979, he attended Oxford’s New College on a scholarship. It was around that time that Grant made his film debut in Privileged; a movie produced by the university’s film foundation.

Following his college graduation, he received a scholarship to study art history at the Courtauld Institute of Art in London. However, he ultimately turned down the offer in order to pursue an acting career. Throughout the early 1980’s, Grant worked a variety of jobs as a means of financing himself, such as tutoring and writing comedy sketches for local television shows; at one point, he even worked as a groundsman for a local football club. After a dry spell in the acting scene, he landed a recurring part in the mini-series, The Last Place on Earth (1985) at the age of twenty five. From there, he eventually appeared in Jenny’s War (1985), Honour, Profit & Pleasure (1985), A Very Peculiar Practice (1986), Shades of Darkness (1986), and Lord Elgin and Some Stones of No Value (1986); having said that however, most of them were small on-screen roles. It wasn’t until 1994ーover a decade after his film debut in Privilegedーthat Grant received a big break when he was cast as a lead character in the romance comedy, Four Weddings and a Funeral (1994). 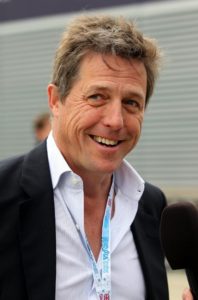 Directed by Mike Newell, Four Weddings and a Funeral followed the life of Charles, a warm-hearted yet socially awkward English man, who falls in love with Carrie, a young American woman whom he constantly crosses paths with as he attends four weddings and a funeral. Premiered at the Sundance Festival in January 1994, the British comedy was eventually released in theatres in the UK later that May. Despite the fact that the film was produced with a budget of £3 million over a period of six weeks, Four Weddings and a Funeral unexpectedly became a huge commercial success upon hitting the screens.

Throughout its theatrical run in the UK, the movie grossed a total of £27.8 million; it later went on to earn $52 million in North America and $193 million internationally for a combined total of more than $245 million. While Grant played the role of Charlesーa performance which earned him a Golden Globe Award in 1995ーthe comedy also starred Andie MacDowell, Kristin Scott Thomas, Simon Callow, James Fleet, David Bower, and many others. Positively received by critics, Four Weddings and a Funeral won multiple awards including four BAFTA Awards, four London Film Awards, a Writers Guild of America Award, amongst countless nominations.

In 1999, Grant returned to the spotlight in the romantic comedy, Notting Hill opposite of actress, Julia Roberts. Featuring a screenplay by Richard Curtis, whom the actor had worked with previously in Four Weddings and a Funeral, the film centred around protagonist William Thacker (played by Grant), a bookstore owner whose life changes upon meeting Hollywood superstar, Anna Scott (played by Roberts). Opened in theatres that May, Notting Hill grossed over $27 million during its opening weekendーan amount that broke the previous record held by the 1997 film, My Best Friend’s Wedding. The sixteenth highest-grossing film of its year, it later went on to gross over $363 million worldwide. Met with a number of complimentary reviews, the comedy received much praise for its witty dialogue and likeable characters. Eventually included in the British Film Institute’s list of “Top 100 Films of All Time”, Notting Hill earned Grant a 5th Empire Award for “Best British Actor” and a Csapnivalo Award for “Best Actor in a Leading Role” in 2000.

After the new millennium, the actor starred in yet another romantic comedy called, Bridget Jone’s Diary alongside Renee Zellweger, Colin Firth, Jim Broadbent and Gemma Jones. Based on a novel of the same title by Helen Fielding, it told the story of Bridget Jones, an assistant at a book publishing company who keeps a personal diary, all while trying to improve upon herself and finding love. In the film, Grant plays the role of Daniel Cleaver, Jones’ boss whom she finds herself fantasizing about at work. Released in theatres in April 13, 2001, Bridget Jone’s Diary quickly became a commercial success, reaping in over $280 million worldwide from a production budget of $25 million. Although some viewers criticized it for being too “sitcom-like”, many praised it for its quality humour and captivating performance by the cast. For his portrayal of Daniel, the actor was given an Evening Standard British Film Award in 2002, amongst a handful of other award nominations.

The following year, Grant starred in the comedy drama film, About a Boy (2002). Adapted from a novel by author Nick Hornby, it revolved around a childish man who is taught the ways of being an adult by a twelve-year-old boy named Marcus. In the movie, the actor played the part of the immature man in question, Will Freeman, while Nicholas Houltーwho was only thirteen at the timeー portrayed the role of Marcus. Released in theatres on April 26, 2002, it was met with wide acclaim, many viewers commending it for its comedic scenes and touching moments. Selected by the American Film Institute as “One of the Top 10 Movies of the Year”, About a Boy eventually grossed over $130 million worldwide throughout its theatrical run. Applauded for his “revolutionary acting”, Grant garnered his third Golden Globe Award nomination for his role in the film; his performance also led the London Film Critics Circle to name him as “British’s Best Actor.”

In 2003, the actor once again returned to the big screen in the holiday-themed romantic comedy, Love Actually. Directed by Richard Curtis, the film followed the lives of eight different couples in London, all of whom are dealing with their love lives in various, unique ways. A member of its ensemble cast, Grant portrayed the part of David, a newly elected Prime Minister who falls in love with a woman named Natalie (played by Martine McCutcheon), a junior member of his household staff. Besides Grant and Mccutcheon, Love Actually also starred Liam Neeson, Colin Firth, Laura Linney, Emma Thompson and Alan Rickman.

Upon its release in theatres on November 14th, 2003, Love Actually grossed over $59 million in the United States and Canada; it eventually earned a total of $247 million worldwide. Although the movie was well-liked in Britain, it was met with a fair amount of mixed reviews in the United States; it currently holds a 63% approval rating on Rotten Tomatoes. Despite this however, the romantic comedy still managed to earn Grant two award nominations in 2004 (e.g. European Film Award, Phoenix Film Critics Society Award). 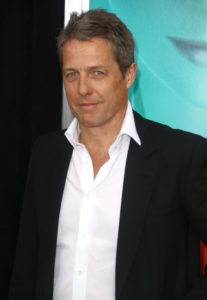 This past August, Grant starred in the Golden Globe Award nominated film, Florence Foster Jenkins (2016)ー it told the story of a New York heiress named Florence Jenkins, who dreams of one day becoming an opera singer. For his portrayal of St. Clair Bayfield, the actor received a Hollywood Film Award for “Supporting Actor of the Year”.

In terms of upcoming projects, the actor made an appearance in Paddington 2ーa British-French comedy film that was released in January 2018. The sequel of Paddington (2014), features Grant in the role of Phoenix Buchanan; other cast members of the movie include Ben Whishaw (voice-over only), Brendan Gleeson, Jim Broadbent, Julie Walters and Imelda Staunton (voice-over only), many of whom also starred in the original film.

If you’d like to stay up-to-date and connected with the Hollywood star, you can follow him on social mediaーyou can find him on Twitter at @HackedOffHugh.