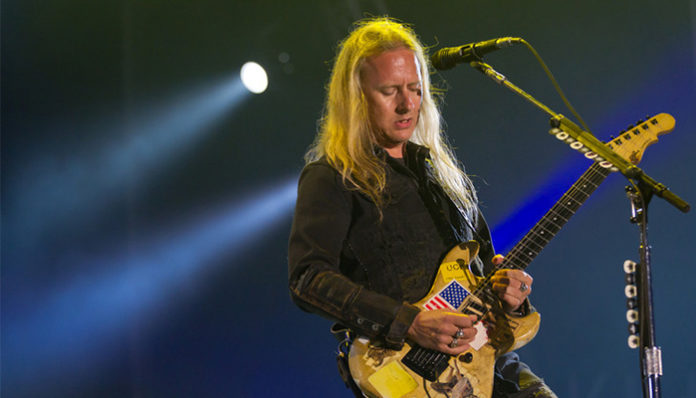 Jerry Cantrell is an American musician who is best known as the main songwriter and lead guitarist of the rock band, Alice in Chains. A fan of hard rock ever since his early adolescent years, he bought his first guitar when he was fourteen years old; however it wasn’t until he was seventeen that he first began to practice playing the instrument seriously. Motivated by his high school drama and choir teachers, he later made the decision to pursue music as a career. Following through with his dreams, Cantrell formed a band called Diamond Lie in the mid 80’s with a few of his friendsーBobby Nesbitt, Mike Starr, and Layne Staley. Playing and performing in various venues across the city, the group quickly attracted the attention of those in the Seattle area; following their initial success, they later changed their name to Alice ‘N Chainz, which was then eventually renamed to the modern, Alice in Chains. Serving as their lead guitarist and main composted, Cantrell and his bandmates released their debut album, Facelift in 1990.

Although the album wasn’t an instant success per se, it did go on to sell over 500,000 copies by the end of the yearーit was later certified gold by the RIAA. Following their debut effort, Alice in Chains went on a concert tour for a few months, after which they began working on their second full-length album. Dirt, as it was called, was eventually released in the fall of 1992. Since then, Cantrell and his rock band have released a grand total of five studio albums, twenty three music videos and twenty seven singlesーmany of which have also received RIAA accreditation. To date, their best-selling album remains to be that of Dirt, which has since sold over four million copies across the world. The winner of an MTV Video Music Award (e.g. Best Video from a Film), Alice in Chains have also been nominated for nine Grammy Awards, and an American Music Award.

Aside from his work with the rock band, Cantrell has also released a few music albums as a solo artist. In 1998, he released Boggy Depot, which was then eventually followed up with Degradation Trip in 2002ーall of which made its way onto the music charts. On top of being an established musician, he has also appeared in a couple of films throughout the years including Jerry Maguire (1996) and Rock Slyde (2009). A well established figure in the rock music scene, Cantrell has been featured in a number of television documentaries such as Unplugged (1996), I Love the ’90’s (2004), Behind the Music (2006), Cry Baby: The Pedal that Rocks the World (2011), and Metal Evolution (2011), amongst others.

So what has the guitarist of Alice in Chains been up to recently? What are some of the new projects that he’s working on as of late? What happened to Jerry Cantrell? Where is he now in 2018? 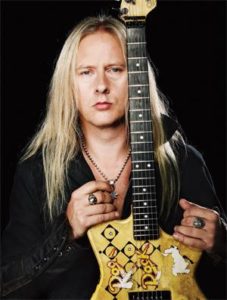 Born on March 18, 1966, in Tacoma, Washington, Jerry Cantrell is the son of Gloria Jean and Jerry Sr., Cantrell, the latter of whom was a Vietnam war veteran; his parents later divorced when he was seven years old. Self described as “half a redneck and half a Yankee”, Cantrell was raised around country music growing up; however that didn’t stop him from developing an interest in music of the hard rock genre in his early teens. Wanting to pursue it for himself, he later bought a guitar at the age of thirteen. Despite his initial intentions however, it wouldn’t be until he was seventeen that he first seriously began to play the instrument. Cantrell considers popular guitarists Tony Iommi, Ace Frehley, Angus Young, Eddie Van Halen and Jimmy Page to be his major musical influences growing up.

As a student, Cantrell went to high school in the Washington city of Spanaway. Prior to purchasing a guitar, he was also an active member of the school choir. Serving as the president of the choir in his senior year, he lead the group to sing at multiple events and competitionsーwhich they won, with the highest possible marks. It was around this time that Cantrell began developing an interest in darker musical tones; he would later cite his drama and choir teachers to be two of the greatest motivators in his life. Following through with his newly found dream of becoming a musician, he formed a rock band called Diamond Lie in the mid 80’s with a few of his friends; the group consisted of drummer Bobby Nesbitt, bassist Mike Starr, and vocalist Layne Staley. Together, they went on to perform at a number of local venuesーcapturing the attention of those in the Seattle area with their music. Shortly afterwards, the band changed their name to Alice ‘N Chainz, which then eventually became the modern, Alice in Chains. 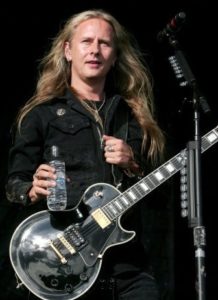 Serving as the band’s lead guitarist, composer and co-vocalist and Cantrell and his band released their debut album, Facelift in August 1990. Produced by Dave Jerden, it served as the group’s first release with Columbia Records, with whom they signed with in 1989. Intended to have a “moody aura”, the album featured twelve songs, most of which were written by Cantrell; a few stand-out tracks include I Can’t Remember, It Ain’t Like That, Put You Down and I Know Somethin (Bout You). Met with a positive reception, it peaked at number forty two on the US Billboard 200 shortly after its releaseーwhich effectively made it the first grunge album to rank amongst the top fifty. Although it wasn’t an instant success, having only sold less than 40,000 copies within six months, Facelift eventually went on to hit 400,000 units in sales. Nominated for a Grammy Award for “Best Hard Rock Performance” for the hit Man in the Box, it was later certified gold by the RIAA at the end of the year. Following the release of the album, Alice in Chains embarked on a tour, opening for music artists such as Van Halen, Iggy Pop, Extreme and Poison.

After the success of their initial effort, Alice in Chains released their second studio album, Dirt in September 1992. Their most successful album to date, it featured darker themes (e.g. drug use, war, pain, death) compared to Facelift and contained mostly songs that were written on the road. Their breakthrough album, Dirt entered the Billboard 200 at number six and went on to receive much praise from critics; it currently holds a near-perfect rating of four and a half stars on AllMusic. Propelling the band into international fame, Dirt also charted in several oversea countries including Australia, Germany, Norway, New Zealand, Sweden and the UK, amongst others. Considered to be one of the most influential albums of the sludge metal sub genre, it consisted of thirteen songs including Dam That River, Down in a Hole, Would? and Them Bones, all of which were written by Cantrell. Eventually spawning five singles, it received 4x Platinum certification in May 2000 for selling over four million copies in the US.

Three years later, Cantrell and his bandmates released their eponymous album, Alice in Chains in November 1995. Similar to Dirt, it focused heavily on darker themes such as drug use, isolation, depression, death and anger. In contrast to their earlier albums however, it also featured less metallic tones and focused more on texturally different musical arrangements and melodies. The first album to include Mike Inez on bass and the last for vocalist Layne Staley prior to his passing, it showcased twelve alternative metal and grunge tracks, including Heaven Beside You, Over Now and Grind, all of which contained lyrics written by Cantrell. While Alice in Chains wasn’t as successful as Dirt in terms of sales, it debuted at the top of the Billboard 200, where it stayed for forty-six weeks. Met with generally favourable reviews, it also peaked within the top twenty in Australia, Norway, Sweden and Finland. As of May 1996, Alice in Chains has received 2x Platinum accreditation from the RIAA for exceeding over two million copies in sales.

After a long six year hiatus, Alice in Chain got back together and released their fourth studio album, Black Gives Way to Blue. Their first and last album with the Virgin label, it went on to peak at number five on the Billboard 200; it was later certified Gold by the RIAA in May 2010. From there, the band took another break prior to reuniting for their fifth full-length album, The Devil Put Dinosaurs Here, which was released in May 2013. 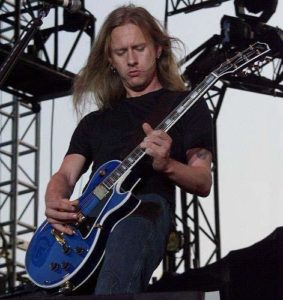 Following the release of their third full-length album, Alice in Chain went on hiatus after the death of Layne Staleyーthe band’s original lead vocalist. Although the group got together a few times in the late 90’s, they did not record or put forth any new material; instead, Cantrell began working on his solo music career. In March 1998, the guitarist released his debut album entitled, Boggy Depot under Columbia Records.

Produced with the help of Toby Wright, whom he had worked with previously, it was noted for incorporating a blend of country, piano and organ elements. Named after a ghost town, it consisted of twelve heavy metal and grunge tracks. Met with mostly positive reviews upon its release, it successfully peaked at number twenty eight on the Billboard 200 in the United States; across the border, it reached number thirty-nine on the Canadian Chart.

In the summer of 2002, Cantrell released his second and final solo album, Degradation Trip. Dedicated to the late Layne Staley, it was also the musician’s first album with Roadrunner Records. Comparable to his earlier works with Alice in Chains with its aggressive, metallic sounds, it revolved around lyrical themes of troubled relationships and drug abuse. Showered with positive reviews, it has been described by many critics to be “Cantrell’s best record”. A successful release, Degradation Trip boasted fourteen tracks including Anger Rising and Angel Eyes which were eventually released as hit singles. In support of the album, Cantrell also embarked on a two-month long solo tour in North America that April.

What Happened to Jerry Cantrell – News and Updates

This past April, Alice in Chains performed at a concert for the first time in 2016 at Las Vegas’ T-Mobile Arena, as part of Guns N’ Roses’ Reunion show. At the highly anticipated event, the guitarist was also seen sporting a new lookーone which involved a grey beard. Speaking of the rock band, they’ve also recently released their first studio recording in three years, a cover of Rush’s Tears, this past November. Aside from that, things have been pretty quiet on the music front for Cantrell and his band, although there have been unconfirmed rumours stating that the group may once again be getting together sometime in the future.

To stay up to date with the rock band, you can follow them on Twitter at @AliceinChains.