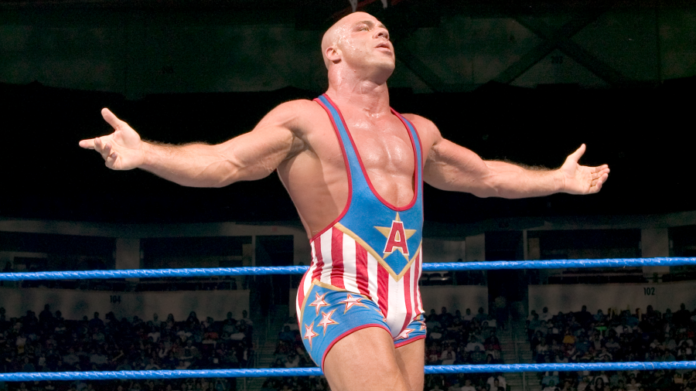 Kurt Angle is a wrestler who’s well-known for the Olympic gold he won in 1996. He then embarked on successful runs on the two most prominent promotions in the industry namely the World Wrestling Entertainment (WWE) and Total Nonstop Action Wrestling (TNA), not to mention his bouts in the independent circuit. Pundits consider Angle as among the greatest wrestlers who graced the squared circle.

Before we check out the latest about Kurt Angle let’s first revisit his career, from his Olympic victory to his dominance in WWE and TNA.

Kurt Steven Angle was born on December 09, 1968, in Mt. Lebanon, Pennsylvania. The wrestling bug bit him early in life and he was already tossing people in the mat at seven years old. The athletic Angle conquered the realm of football and wrestling in high school, and in college he obtained a degree in Education at Clarion University of Pennsylvania while winning NCAA wrestling championships in the ring.

In 1995 Angle bagged gold at the Wrestling World Championships held by FILA. Angle then pushed for Olympic gold which he won in the 1996 Summer Olympics, enduring hardships such as a broken neck and the murder of his trainer Dave Schultz.

After this momentous victory Angle was approached by the WWE for a contract but turned it down as he wasn’t sold into a future in pro wrestling just yet.

Eventually Angle was sold into pro wrestling but he didn’t jump right into the thick of it yet. In October 1996 Angle was invited into an event titled High Incident which was held by Extreme Championship Wrestling (ECW), and served as guest commentary for one match. Unfortunately it was during this event where the infamous crucifixion of the wrestler Sandman took place, and this infuriated Angle. He expressed his anger at several of the promotion’s employees and even threatened Paul Heyman with legal action should the mock execution affect his future in pro wrestling. The perpetrator Raven apologized for his actions but this failed to entice Angle into the ECW.

Two years later Angle changed his mind and signed the WWE contract although he’ll have to start in developmental first. He also participated in the 14-man battle royal during the 50th Anniversary Show of the National Wrestling Alliance (NWA) in the same year.

Kurt Angle at the WWE

1999 marked as Angle’s first appearance in the WWE during an episode of Sunday Night Heat. Angle spent a majority of the year wrestling in dark matches and house shows. He made his debut on November 14 during the pay-per-view Survivor Series and had a winning streak for two months. He made good use of his Olympic medal in his gimmick of a patriotic “hero” and encouraged people to exert effort to reach their dreams. However the audience did not like his character which made Angle turn heel (villain) and shoved the fact that he was an Olympic winner to the faces of the public and other wrestlers.

In February Angle was crowned Intercontinental and European Champion and held on both belts at the same time. In October he won his first WWE Championship for a reign of four months. During the historic Invasion storyline Angle played on both warring factions until revealing in the end that he was just a double agent all along for Vince McMahon. Angle continued his villainous persona which led to the inception of the chant “you suck” whenever the wrestler entered the squared circle, courtesy of Edge. This chant would follow him until today in his independent wrestling runs.

Angle roared through the first half of the decade in various feuds, from Brock Lesnar to the late Eddie Guerrero. He feuded with Shawn Michaels and fought each other at WrestleMania 21 in 2005 which was hailed with a “Match of the Year” award by the magazine Pro Wrestling Illustrated. In 2006 Angle was moved to the revived ECW, which was now a branch of the WWE, and adopted the gimmick “The Wrestling Machine”. He only stayed for a few months before WWE released him from his contract due to health reasons, but reportedly he was fired due to his struggles with painkiller addiction.

Shortly after leaving WWE Angle inked a contract offered by TNA. He made his non-match debut on October 19 where he confronted Samoa Joe regarding the stolen championship belt. He fought his first televised match a month later and won his first TNA World Heavyweight Championship on June 17, 2007 during Slammiversary. A week later he defeated Brock Lesnar for the IWGP Heavyweight Championship at the Japanese promotion Inoki Genome Federation. Samoa Joe, who held the Tag Team and X Division belts, challenged Angle to a match wherein the winner takes all belts. Angle emerged victorious and became a quadruple champion.

Angle’s run at TNA involved joining factions like the Main Event Mafia and Immortal. In 2013 he was inducted into the promotion’s Hall of Fame. The following year he was appointed as TNA’s Executive Director of Wrestling Operations. His full-time contract with TNA expired in September 2014 and Angled attempted to contact WWE for another run but he was declined.  He signed a part-time contract with TNA and returned in January 2015, winning another TNA World Heavyweight Championship for a short reign. Angle appeared in the MMA promotion Bellator on November 07 as a guest commentator.

On January 31, 2016, Angle joined the Maximum Impact Tour of TNA in the United Kingdom. His last match was on March 08, 2016 against Bobby Lashley which he lost.  Angle then spent the remainder of 2016 wrestling in independent promotions such as What Culture Pro Wrestling (WCPW), URFight, Revolution Pro Wrestling, and Insane Championship Wrestling.

On February 12, 2017, Angle will be facing Alberto El Patron (or better known as Alberto del Rio) at the True Destiny event of WCPW. The event will be held at the Planet Ice arena in Milton Keynes, England.

WWE greeted Angle happy birthday in their Instagram account on December 10. The post roused speculation regarding the promotion’s interest in Angle, and some even theorized that he might be a surprise entrant in the 2017 Royal Rumble. These speculations on his return were reinforced by the interview Angle had at The Ric Flair Show last August 29, 2016 where he stated that he talked to Triple H and being in good terms with the WWE.

Angle is no stranger to acting in the big screen. He debuted in the 2009 drama flick End Game as a lead character. In 2017 he is set to star in the series Emergency: LA, and has secured a role in the sci-fi movie The Epidemic which is currently in pre-production. Angle is also appearing in the comedy Chasing Molly.

Angle has been using the hashtag #AngleStrong in social media when it comes to posts that encourage people to fight against addiction. In 2017 he will be releasing the #AngleStrong app that is designed to help addicts by sending positive messages on a daily basis and locating nearby AA / NA meetings.