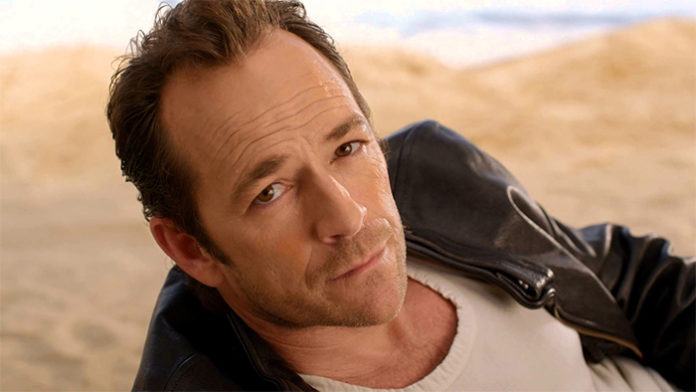 American actor, Luke Perry is best known for his portrayal of Dylan McKay in the Fox series, Beverly Hills 90210. Despite having been raised in a small, rural community, the farming lifestyle was never something that was on the forefront of his mind; instead, he was much more interested in acting and getting involved in the entertainment scene. Fuelled by his growing desire to become an actor, he left for Los Angeles, California after graduating from high school at the age of eighteen. Enrolling himself in acting classes soon afterwards, Perry also worked several odd jobs to help support himself at the time. However, the path to stardom quickly proved to be difficult; over the next three years, the aspiring actor was met with over 200 rejections. After much hard work and perseverance, he landed a small role in the television series, Loving (1988) at the age of twenty-two. Little did he know at the time, that he would be cast as a starring character in the drama series, Beverly Hills 90210 just two years later in 1990.

His first starring role on television, the drama series has been considered to be responsible for the launching of Perry’s career. Although Beverly Hills 90210 was initially met with mediocre reviews, it eventually gained momentum and became immensely popular in the early 90’s. Despite the fact that it came to an end in 2000, the actor’s performance in the show remains to be one of the most well remembered portrayals of his career. Rising in prominence, Perry later went on to appear in Scorchers (1991), Buffy the Vampire Slayer (1992), At Home with the Webbers (1993), 8 Seconds (1994), Biker Mice from Mars (1995), and Invasion (1997). Since he first step foot into the show biz, the actor has taken on well over 90 different roles in both television and film; not to mention, he has also received a number of industry recognitions including two Bravo Otto Awards for “Best Male TV Star”, amongst a handful of nominations.

While acting has undoubtedly taken up a large portion of his time, Perry has also starred in several reality series over the years including Jeopardy! (1992), Whatever Happened to? (2007), WWE Summerslam and Celebrity Name Game (2014). Throughout his career, he has also been featured as a special guest in a handful of talk shows such as Live! with Kelly (2005), Late Night with Conan O’Brien (2006), Jimmy Kimmel Live!, The Wendy Williams Show (2013), and The Insider (2014) to name a few. A talented and versatile man, did you know that Perry also directed two episodes of Beverly Hills 90210 back in the day?

So what has the actor of Beverly Hills 90210 fame been up to in the recent years? Where has his work brought him as of late? What are some of his latest on-screen roles? What happened to Luke Perry? Where is he now in 2018? 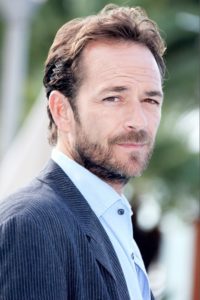 Born on October 11, 1966, in Mansfield, Ohio, Luke Perry (Birth Name: Coy Luther Perry III) his parents were a steelworker and a homemaker respectively. When Perry was still a grade schooler however, his parents divorced; as a result, he was raised majorly by his mother Growing up in the small, rural community of Fredericktown, Ohio, with his brother and sisters, Perry never had a strong connection with his biological father, up until his death in 1980. It was instead his stepfather, whom he looked up to and admired as a young boy.  As a student, he was never too enthusiastic about the farming curriculum taught at his high school (he recalled being taught how to drive tractors and give birth to cows); he was much more interested in drama and the arts.

Nonetheless, Perry sticked it out until his graduation in 1984. After receiving his diploma, he left his hometown behind him as he set off for the country’s entertainment centerーLos Angeles. From there, the aspiring actor began working several odd jobs while enrolling in acting lessons, in attempts of narrowing the gap between himself and his Hollywood dream. However as one would have expected, the journey to stardom proved to be difficult. In a later interview, the star revealed that he had attended over 200 different auditions prior to landing a single commercial gig. Determined to make a name for himself, Perry continued to attend a number of auditions over the next few years. In 1988, his effort finally paid off; after much perseverance, he landed his first television role in the series, Loving. 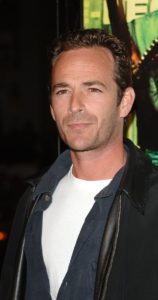 From there, Perry was eventually cast in as a recurring role in the romance drama, Another World (1988). Premiered on NBC in May 1964, the series centred around the lives of those living in a Midwestern town known as Bay City. Created by William J. Bell and Irna Philips, its ensemble cast has featured many actors and actresses over the years. Noted for being one of the first shows on television to discuss openly about taboo topics such as abortion at the time, Another World garnered many awards during its run, including a Daytime Emmy Award for “Outstanding Drama Series” in 1976. In the show, Perry played the part of Kennyーa character who appeared for the first time in the episode aired on February 1988. Altogether, he was on the series for a total of ten episodes.

A couple of years after making his acting debut, Perry received perhaps one of the biggest breaks of his career when he was cast as a lead role in the NBC drama, Beverly Hills 90210 (1990). Created by Aaron Spelling, E. Duke Vincent and Darren Star, the soap drama premiered on the Fox Network on October 4, 1990. Starring Jason Priestley, Shannen Doherty, Jennie Garth, Ian Ziering, and Luke Perry, the series chronicled the lives of a group of tight-knit friends living in the upscale community of Beverly Hills, California, as they go through high school, university and finally, into the real world.

Although the show was initially met with a lukewarm reception, the ratings for Beverly Hills 90210 eventually went up as the episodes progressed; during the peak of its popularity in the fourth season, it managed to attract over 21 million viewers to their screens. One of the original main cast members, Perry played the role of Dylan McKayーa high school loner who eventually befriends the group. After starring in the show for six seasons, the actor took a small break in 1996, prior to returning to the show in 1999 as a main cast member of season nine. For his convincing performance, Perry received two TV Land Award nominations and a Kids’ Choice Award nomination. 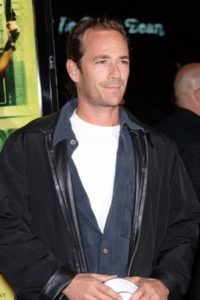 Following the end of the drama series, Perry returned to the small screen in the post-apocalyptic drama series, Jeremiah (2002). Created by J. Michael Straczynski, it takes place sometime in the distant future, where the human  population has been demolished by a lethal virus. Based loosely on the works of Belgian comic book writer, Hermann Huppen, the show starred the actor as Jeremiahーone of the main survivors of the virus, who is later tasked with rebuilding the town.

Aside from Perry, Jermiah also featured the acting talents of Malcolm Jamal Warner, Peter Stebbings, Kim Harthorne, Byron Lawson and Kandyse McClure. Upon its release on March 3, 2002, the show received mainly favourable reviews from viewersーmany praising it for its engaging characters and level of originality. Perry ultimately continued playing his role for 35 episodes, from the start of the series until its end in September 2004.

Over the next few years, the actor guest-starred in various television series including Clone High (2003), Will & Grace (2005), and What I Like About You (2005). He received his next big break in 2006, when he was cast as one of the lead characters in the NBC drama, Windfall. The brainchild of Laurie McCarthy and Gwendolyn M. Parker, it depicted the story of a group of friends, who after sharing a multi-million lottery jackpot, find themselves having to face with the issues that come alongside instant wealth. Met with generally positive reviews upon hitting the screens, Windfall attracted over nine million viewers during its pilot episode in the summer of 2006. Aside from Perry, who portrayed the role of Peter Schaefer, the serial drama also starred Sarah Wynter, Jason Gedrick, Alice Greczyn, Jon Foster, and Lana Parrilla. Despite the favourable reviews that it received from viewers however, Windfall was later cancelled in August 2006, after a run of thirteen episodes.

The following summer, Perry starred in the HBO drama series, John from Cincinnati alongside Bruce Greenwood, Austin Nicholas, Rebecca De Mornay, Ed O’ Neil, and Keala Kennelly. Set in Imperial Beach, California, it followed the lives of a family of surfers, after they are visited by a mysterious young man of unknown origin. A collaborative effort between Ken Nunn and David Milch, the former of whom is also an author, John from Cincinnati featured the actor as Linc Starkーa surf talent manager, scout and agent who is also the owner of his own line of surf products. Upon its premiere in June 2007, the show garnered a little over three million viewers; although the ratings eventually began to decline in the subsequent episodes, it later climbed back up for the finale, which aired that August. In total, John from Cincinnati ran for ten episodes prior to being cancelled by HBO.

In 2010, Perry landed a lead role in the apocalyptic thriller film, The Final Storm. A direct-to-video release, it revolved around a man named Silas (played by Perry), who finds shelter with a couple named Gillian and Tom after fleeing from a devastating storm. Featuring a screenplay by Tim McGregor, The Final Storm‘s cast list also included actors Steve Bacic, Cole Heppell and Lauren Holly. Despite haven been produced on a budget of $5 million, the TV film was heavily panned upon its release for its plot holes and predictable storyline. Nonetheless, its soundtrack did go on to earn two Leo Award nominations for “Best Musical Score” and “Best Production Design” later that year.

This upcoming January, Perry will be co-starring in a teen drama called, Riverdale (2017)ーit will be his first major television appearance since FCU: Fact Checkers Unit back in 2010. Scheduled to premiere on The CW on January 26, 2017, the series will be featuring the actor as Fred Andrewsーthe father of the show’s main protagonist, Archie Andrews (played by K.J. Apa). Based on the characters from Archie Comics, Riverdale will also be starring Cole Sprouse, Camila Mendes, Lili Reinhart and Ashleigh Murray, amongst others. According to what has been posted on IMDb, Perry will be appearing in at least thirteen episodes.

In terms of recent appearances, the actor co-starred in a comedy drama, It’s Gawd! (2016) this past June. Written and directed by Gerald Brunskill, Perry was joined by actors Booboo Stewart, Josh Meyers, Rebecca Mader and Jackie Moore on the set.