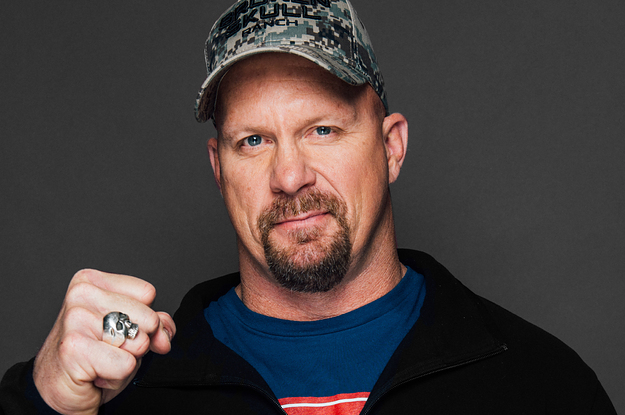 Stone Cold Steve Austin is perhaps one of the most recognizable wrestlers who graced the ring of the World Wrestling Entertainment (WWE) thanks to his rebellious nature and his antics that respected not even the promotion’s owner himself. His career in the WWE lasted only for several years and it was during Austin’s tenure where some of the best storylines were created.

Before we take a look at the latest regarding Austin, let’s first revisit his career and how he became Stone Cold.

Steven James Anderson was born on December 18, 1964, in Austin, Texas. While the Texas Rattlesnake was still a snakelet his parents went on their separate ways and he grew up under the care of his mother Beverly. Later on Beverly married Kenneth Williams and Austin had his name legally changed to Steven James Williams.

Austin fully immersed himself in football throughout his childhood and in his teenage years, and thanks to the sport he earned scholarships for his college education. He was also into physical fitness hence his decision to pursue a physical education degree at North Texas State University where he was a student athlete. Austin’s football eligibility ran out before he could finish his studies so he worked at a freight dock to support himself for another semester. Unfortunately he was too burned out and decided to drop out even though he was just 18 hours away from obtaining the degree.

After dropping out of college Austin focused on working fulltime at the docks and lifting weights. He was also an avid viewer of World Class Championship Wrestling (WCCW) on the television and its live matches in Dallas. It was during this time when Austin considered trying out his luck in pro wrestling.

In 1989 WCCW ran advertisements about the new wrestling school started by the wrestler “Gentleman” Chris Adams. Austin signed up and, five months later, had his first ever televised wrestling match versus the journeyman wrestler Frogman LeBlanc. Austin was guided by his opponent throughout the match and it led to his victory plus $40 in his pocket. His training continued while he was continuously booked in matches under the name “Steve Austin”. He befriended fellow wrestlers like Bronco Lubich and Skandor Akbar, and they were Austin’s excellent sources of information about pro wrestling during those long car trips.

During the same year Austin made his debut as “Steve Austin” at the promotion United States Wrestling Association (USWA) in Memphis. In the early 90s Austin made only $20 per bout and was forced to sleep in his car or share motel rooms with fellow wrestlers, while his diet mostly consisted of raw potatoes. His parents offered him financial assistance but Austin refused the help and wanted to get through his woes with his own hands. He also experienced going heel (villainous character) for the first time in this promotion by feuding with the Gentleman himself on a “teacher vs. cocky student” kind of rivalry.

Eventually Austin realized that he needed to go up the steps if he wanted to further his wrestling career. Then World Championship Wrestling (WCW) gave him a call.

In 1991 Austin joined the promotion and within the same year he had a championship belt already strapped around his waist. He continued his heel persona under the name “Stunning” Steve Austin and worked his way up the card.

During a three-week tour in Japan Austin tore his triceps and, while he was recuperating weeks later, he received a call from Eric Bischoff, the WCW Vice President. Austin was terminated from the promotion after he was deemed “unmarketable”, thus ending his four-year tenure in WCW.

Shortly afterwards Austin received a call from Heyman who then invited him to Extreme Championship Wrestling (ECW). Austin focused on cutting promos as he was not yet in top shape to wrestle, and he made good use of this opportunity to criticize WCW. He wrestled in ECW for a few months under the name “Superstar” Steve Austin and his talent attracted the WWE honcho Vince McMahon.

Austin jumped ship to WWE in 1995 as “The Ringmaster”. He was a man of few words, letting his manager Ted DiBiase do the talking. However Austin did not really enjoy portraying the character and WWE told him to come up with something new. This led to the birth of the character Stone Cold Steve Austin, with the first two words came from his then-wife Jeannie Clarke who said that Austin’s tea might get “stone cold” if he doesn’t drink it.

1996 saw his climb to success with the debut of his finishing move, the Stone Cold Stunner, and the legendary catchphrase “Austin 3:16”. His heel persona was supposed to draw hate from the audience but instead they loved Austin’s antics. His foul language, beer chugging habit, violent outbursts, and constant use of the middle salute boosted his popularity and Austin turned down the requests of the brass to tone down his attitude.

Austin was touted as the poster boy of the WWE’s well-known “Attitude Era” in the late 90s. He had thrilling feuds with the late Owen Hart, Booker T, The Rock, and the stable D-Generation X, to name a few.

Perhaps one of his greatest rivalries was against the boss Vince McMahon himself. The two locked horns which involved fights in and out of the ring, destruction of expensive vehicles, hospital visits from “Doctor Austin”, and kidnapping at “gunpoint”. This feud was one of the greatest storylines in the Attitude Era which contributed to the increase in ratings of WWE versus WCW during that time. He also played an important role during the Invasion storyline in the early 2000s.

Problems with the creative direction in the WWE, plus the medical problems that were surfacing, led to Austin’s retirement from wrestling. In 2009 he was inducted in the Hall of Fame. He still appeared in the promotion albeit in non-wrestling roles with very limited physical action.

Austin turned to other ventures after his time grappling in the squared circle was up. He pursued a career in acting which started in 1999 as a minor character in the television series Nash Bridges, and in 2005 he had his film debut in the comedy The Longest Yard.

Austin also served as an executive producer in the reality series Redneck Island and Steve Austin’s Broken Skull Challenge. He hosts the ongoing Stone Cold Podcast: Live! on the WWE Network, and The Steve Austin Show – Unleashed podcast available on iTunes. He was the host of the fifth season of WWE Tough Enough in 2010.

In 2015 Austin partnered with El Segundo Brewing Company in the creation of his very own Broken Skull IPA Beer, and with the knife company Cold Steel for the Broken Skull line of knives.

On December 19, 2016, WWE struck a partnership with gaming chair company Clutch Chairz for the production of seating with themes based on WWE superstars and legends. A Stone Cold Steve Austin chair has been announced and will be available for purchase in early 2017.