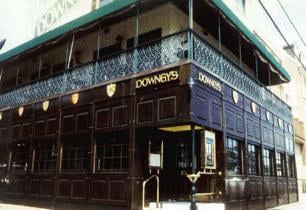 In 2012, more than 5,000 bars closed their doors – Downey’s Irish Pub, based out of downtown Philadelphia, Pennsylvania needs to change things or else become one of those statistics. Owner Dominic ditched his career to purchase Downey’s, which is a famed Philadelphia bar. Dominic promised that with his own Irish heritage, he would keep the pub alive. When he started at Dominic’s, they did more than $2 million in sales, but tragedy truck; Dominic suffered a personal loss, and Downey’s soon followed with him. Downey’s is currently $3 million in debt, and the bar is in general disrepair, and it is up to Jon Taffer and his crew to revitalize Downey’s.

Jon Taffer and a local whiskey expert, Keith Raimondi, perform reconnaissance on the bar before taking any action. Keith is a huge local figure and has stepped up to assist Jon in this Bar Rescue. Jon points out that Dominic is a figure in the Irish community, and Keith explains that he used to live in the area, which is a hip, young professional area. Jon points out that this is “not a dollar beer area.” Irish bars, Jon explains, are about whiskey and beer. Keith then points out that people know about Downey’s but no longer go to the bar.

Jon has Keith go into Downey’s to have a drink, get the scoop, then report back to Jon with any information he gains. Keith explains that the bar is gross with some flies and general disrepair, and there were some shady characters performing Irish Car Bomb drinks at the bar. Keith also asks for any Irish whiskeys that the bar has, but there are only four – Bushmills, Jameson, Michael Collins, and one more that is currently out of stock. Keith also orders a pasta dish, which is an interesting Italian item in an Irish bar. The food is horrible, and Keith talks to a patron about the food – the patron explains that he ordered oysters for the first time from here, and when they arrive, they looked very gelatinous and were not shocked. Overall, the food was disgusting. The patron eats one oyster and refuses to pay for it.

Dominic steps out of the kitchen and offers to show them the tag, but the patron insists that they are not good oysters. Dominic walks away and ignores the complaint, Keith takes a deeper look at the bathroom – napkins are strewn everywhere, the sink is out of order, and there are random stains on the wall. Keith reports back to Jon. Jon then enters Downey’s and speaks to Dominic, and Dominic explains that the bar is losing money because he is typically the one running every managerial position and also running the kitchen.

During the inspection of Downey’s, Jon finds a dead mouse that has been sitting for weeks. There is fly paper on the wall and garbage all over the kitchen, as well as unprotected surge protectors. Dominic explains that he cannot see everything, and Jon points out that although Dominic can be a great chef, he is not a great manager. Jon then makes a demand that Dominic close the bar immediately, threatening to bring the customers back and show them the state of the kitchen. Closing the bar is a process as customers complain that they are not done drinking, but ultimately, Dominic closes the bar.

The next day begins with Jon showing every health code violation, and he pulls in retired health inspector Ed Warnick to serve as a seasoned eye. Ed starts behind the bar, pointing out that there are glasses that are not clean and they cannot dry due to being placed on a cloth napkin; without proper ventilation, the glasses will stay dirty. Ed then points out the fruit flies on the bar area; there are towels on counters that are not placed in soaps or sanitizers. Dominic has a habit of making excuses for every little thing that goes wrong in the bar. Ed then heads back into the kitchen, and points out that there are no clean utensils. There are cross-contaminants on the kitchen hood, and even grease. In the bottom area of the kitchen preparation zone, lobster bisque has been sitting for a long time which has remained in the “danger zone,” which poses a risk to the customer for food poisoning.

The worst part of the kitchen is the walk-in cooler; the cooler is room temperature and everything is a health risk, Ed explains. There is no date or time on the chicken pot pie, but Dominic says that the only thing that the chicken pot pie needs is a lid on the top. Downey’s definitely has a problem with food sanitation and safety. The mushy pot pie’s temperature is checked, and it sits at an unhealthy 52 degrees. Ed would definitely shut the place down. Jon demands that Dominic get the staff together, and exits the pub to take a shower. Dominic then says that he cannot do everything alone – if Dominic had a dime for every excuse that came out of his mouth, he would not need to be running Downey’s.

When the entire staff of Downey’s is gathered, Jon asks about the daily operations from the employees; Brittany, a bartender, says that she is embarrassed to work there since they lack direction and lack a leader. The employees are the ones that make the place what it truly is. They all have faith in Dominic, but he insists that they do not listen; since Dominic has taken over, he has stripped all management and it is up to the employees to get things done.

Dominic, Jon and Ed get together to form a plan of attack to revitalize Downey’s, and he brings in his team of experts consisting of Keith, as mentioned earlier, and Brian Duffy, an executive chef with expertise in Irish cuisine. The team works together with Jon revitalizing the staff, Keith fixing the alcoholic menu, and Brian working with the kitchen staff to fix the menu. Of course, the bar itself rejuvenated with a fresh makeover, fresh paint, and new decorations. The bar reopens, although there are still some problems – drinks take upwards of 2 and a half minutes to make, but the kitchen is struggling to keep up the amount of customers. Food is overcooked, and the bar is over serving. Jon explains that the bar needs to keep a tighter eye on people and not serve people, for example, 7 shots.

Downey’s flourished for a period of time, and Dominic began to work harder – he began producing schedules and making more time one-on-one with employees, although this habit began to decline overtime which unfortunately led to the closing of Downey’s Irish Pub.

Unsurprisingly, Downey’s has since closed down under Dominic’s supervision. Dominic showed an overall lack of interest in keeping the bar running nicely with the advice of the Bar Rescue staff; Downey’s received a lackluster 2.1 rating across 140 reviews on Yelp, and a 3.5 average across 134 different reviews on Facebook. Downey’s sits decaying and ready for sale for any customers. Even worse, Downey’s was labeled as the “worst Irish pub in America” by Irish heritage website, IrishCentral.com. It is very unlikely that Downey’s will reopen due to the damaged reputation under the supervision of kitchen chef Dominic. Philly.com, a Philadelphia-based webpage that keeps visitors up-to-date on local news of Philadelphia, even lambasted Downey’s in an article where they explain that the bar closed and has been sitting for sale.