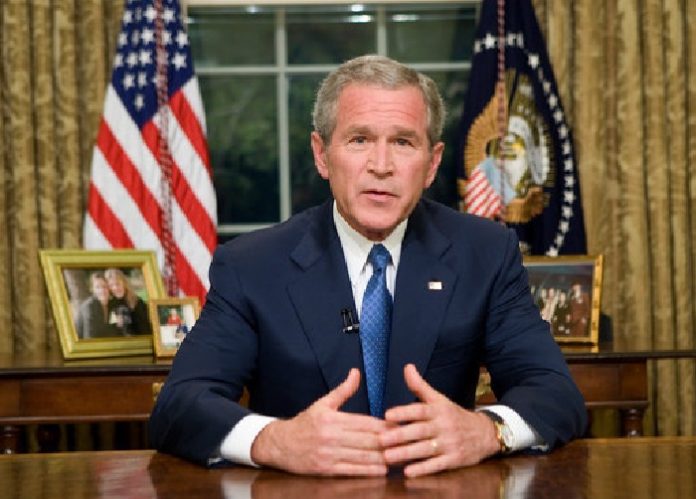 George Walker Bush served as the 43rd President of the United States from 2001 to 2009 after five years serving as the Governor of Texas. As the son of a Former President the family he was born into was already wealthy, but George Bush became a rich man in his own right during a long, and often turbulent career in business long before he ever entered the political arena. But how exactly did George W. Bush make his fortune? Read on to find out.

How Did George Bush Make his Money and Wealth?

George W. Bush was born on July 6th 1946 and was the first child of Barbara and George H.W. Bush. He grew up in Houston and Midland and his father was a Navy Veteran who had seen active service in World War II as the youngest aviator in the US Navy during the conflict. When George Jr was a young child his father was attending Yale University, but after graduating he moved the Bush family to West Texas and entered the Oil business. George Bush seniors early business career was extremely successful, and he was a millionaire by the age of 40.

George W. Bush attended high school at Philips Academy in Massachusetts and played basketball there. He later followed in his fathers footsteps at the beginning of his career by serving in the military. He spent two years in active duty with the Texas Air National Guard, flying with the 147th Reconnaissance Wing based at Ellington Field, and after further service with the Alabama Air National Guard he attended Yale and graduated in 1968. After Yale George W. Bush went to Harvard Business school, from which he graduated with an M.B.A. in 1975.

He followed his fathers footsteps again into the oil business after Harvard, and after meeting his future wife Laura in 1977, he proposed to her three months after they first met. The couple married in November 1977 in settled down in the Bush family ranch in Crawford, Texas. The same year he founded Arbusto Energy, a minor league oil exploration company. Arbusto eventually was renamed Bush Exploration and in 1984 it merged with a large oil exploration company, Spectrum 7. Despite big investments in the business from family friends the dip in oil prices left Bush Exploration on shaky ground, and in 1986 the business became part of another Texas petroleum company, the Harken Energy corporation. George Bush became a board member for Harken and also served as a consultant for the business, but after a mediocre track record without a great deal of success in oil companies, he was interested in entering other areas of business.

His next venture, and the one that would eventually provide the vast majority of his fortune, was setting up a group of investors to purchase the Texas Rangers Baseball team in 1989. A friend of the Bush family, Eddie Chiles was interested in selling the franchise in April of that year and George Bush organized a syndicate of investors to purchase a majority share in the team for $89 million. George Bush also borrowed half a million dollars to purchase a small personal stake in the team. As time went by George Bush gradually increased his share in the team, eventually acquiring an equity stake of $1.8%, he also became the team’s co-general partner and helped negotiate the franchise’s new ballpark in Arlington, which also increased the value and potential earnings from the team.

In 1998 Tom Hicks bought the Rangers Franchise for $250 million, the second highest amount ever paid for an MLB team at the time and George Bush, who also received a 10% escalator bonus on his stake ended his involvement with the Rangers while profiting to the tune of almost $15 million.

Long before he ever became president, George Bush was involved in political activity. He ran for the house of representatives in 1978 from Texas’s 19th congressional district but he was defeated by a slim majority to Kent Hance, perhaps unsurprisingly as the retiring Democratic party member, George H Mahon had held the district since 1935. George Bush Jr moved his family to the nations capital in 1988 to assist in his fathers bid for the Presidency, serving as a campaign advisor and media liaison during the campaign. He went out on the campaign trail with George Bush Sr and was included in his Father’s re-election campaign in 1992.

In 1994 he ran for the Governorship of Texas, successfully defeating Ann Richards in his campaign to become the 46th Governor of of the Long Star state from 1995 to 2000. He successfully ran for President in 2000 and became the 43rd President of the United States in 2001, eventually serving in the office from 2001 to 2009. His Presidency was beset by shocking World-changing events and his time in The White House will probably always be best remembered by the shocking and completely unforeseen terrorist attacks of September 2011, and his reaction to them. Unfortunately the attacks in New York and Washington were not the only troublesome events during his presidency, he also faced criticism for the governments response to the tragic events in New Orleans when hurricane Katrina left the city completely at the mercy of extreme weather events.

George Bush’s presidency also ended amid much controversy with the American economy reeling from the effects of the 2008 financial crisis, and upon leaving office George W Bush went on to become a public speaker and resume his business career.

George W. Bush met Laura Lane Welch, a schoolteacher and librarian at a family barbecue in 1977 and the couple got married after a whirlwind romance lasting just three months, in November of that year.

Does George W. Bush have any Children?

Laura Bush gave birth to twin daughters in November 1981 and they were named Barbara and Jenna Welch, he also became a grandfather for the first time in April 2013 when Jenna gave birth to a daughter Margaret Laura.

Due to his status as an ex-president of the United States, George W. Bush receives an annual pension of $191,300. He is also entitled to several other perks such as Secret Service protection, and expenses to cover the costs of his offices. His pension income is boosted by his business activities, proceeds from his book, and fees from speaking engagements.

Following the inauguration of President Barack Obama, George W Bush and his family returned to the family ranch in Crawford Texas. Not long afterwards they bought a modest home in the Preston Hollow area of Dallas where they settled down to life after the White House.

The Legacy of George Bush’s time in the White House is a hotly contested one, although many of his critics and admirers alike agree that his time in office was one of the most trans formative periods in recent American history. There can be no doubt that events that were entirely out of his control led him to make decisions that were without precedent, and to his admirers, the War on Terror and his increased surveillance in the name of counter terrorism have undoubtedly stopped another September 11th style attack from occurring on American soil.

Since leaving office George Bush’s popularity has gradually begun to increase, in 2010 he collaborated with former President Bill Clinton to establish the Clinton Bush Haiti Fund to raise funds to assist the relief and recovery efforts following the devastating Haiti Earthquake. In 2014 he published a biography of his Father called ‘41:A Portrait of my Father’ and in February 2016 he campaigned on behalf of his brother Jeb Bush in support of his bid for the 2016 Republican Party Presidential Primaries.

Now in 2018 George W. Bush keeps a fairly low profile, although he does make occasional public appearances in and around Texas, most notably at home games of the Texas Rangers, where he continues to be hugely popular and generally receives a standing ovation.