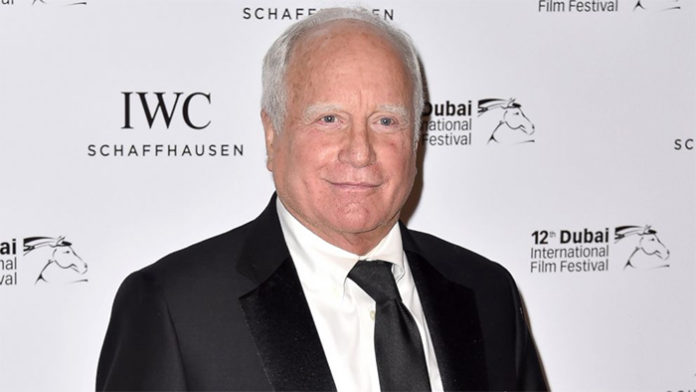 Golden Globe Award-winning actor Richard Dreyfuss has starred in several high-profile films including Jaws, American Graffiti and Stand By Me. The son of a restauranteur, he delved into acting in his youth, at the Westside Jewish Community Center and the Beverly Hills Arts Center. At the age of fifteen, he made his debut in a television series called In Mama’s House (1962). Continuing to explore his passion for the arts, he appeared in several shows over the next few years including Ben Casey (1965), Gidget (1966), Please Don’t Eat the Daisies (1966), Occasional Wife (1967), and Judd for the Defense (1968). In 1967, he also made an appearance in a feature film for the first time in The Graduate (1967)ーalthough it was an uncredited role. It wasn’t until the following year, that he played a larger part in the drama movie, The Young Runaways (1968). A few castings later, Dreyfuss received a breakthrough with the comedy, American Graftti (1973). Lauded for his stunning performance, it later earned him a Golden Globe Award nomination for the category of “Best Actor”.

Propelled into rising stardom, the actor soon found himself landing a number of roles in The Apprenticeship of Duddy Kravitz (1974), Jaws (1975), and Victory at Entebbe (1976). In 1977, more than  ten years after his debut, he collided with another huge opportunity when he was cast as a main lead in the romantic comedy, The Goodbye Girlーa role which eventually led him to another Golden Globe Award. Since then, Dreyfuss has worked on multiple blockbusters such as Nuts (1987), Always (1989), What About Bob? (1991), and Mr. Holland’s Opus (1995). A talented actor with a respectful filmography to his name, he has been recognized with countless accolades throughout his career including an Golden Globe Award (e.g. Best Actor in a Motion Picture), an Academy Award (e.g. Best Actor in a Leading Role), a BAFTA Award (e.g. Best Actor), a Saturn award (e.g. Best Guest Star on Television), amongst many others.

In addition to his dedication for live-action acting, Dreyfuss has also lent his voice to several projectsーfor instance, he acted as the narrator for The Great Battles of the Civil War (1994), The Call of the Wild: Dog of the Yukon (1997), Family Guy (2009) and has also voiced various characters in James and the Giant Peach (1996), Rudolph the Red-Nosed Reindeer & the Island of Misfit Toys (2001). Over the years, the celebrated artist has taken on well over a hundred different roles. Not to mention, he’s also stepped in front of the cameras for a variety of TV programmings such as Central Park (2005), Real Time with Bill Maher (2006), Naked Science (2011), and The Real History of Science Fiction (2014).

So what has the multi-talented actor been up to since then? Has he retired from acting now that he’s getting close to his seventies? If not, what are some of his latest projects? What happened to Richard Dreyfuss? Where is he now in 2018? 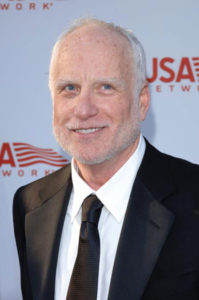 Born on October 29, 1947, in Brooklyn, New York, Richard Stephen Dreyfuss is the son of Norman, a peace activist and Geraldine Dreyfuss, a restaurateur and attorney. For the first few years of his life, he lived in the Bayside area of Queens. However his father soon grew tired of the city; when Dreyfuss was nine years old, the family relocated to Europe briefly, before settling down on Los Angeles, California.

As a teenager, he was a student at Beverly Hills High School, where he had classes with Albert Brooks and Rob Reiner. It was during that time that he began developing an interest in acting. Delving into his new hobby, he took part in a number of productions with the Westside Jewish Community Center and the Beverly Hills Art Center under the guidance of Bill Miller. At the age of fifteen, Dreyfuss made his television debut in a show called, In Mama’s House (1962).

Following his high school graduation, he went to San Fernando Valley State College for a year. He later worked at an Los Angeles hospital for a couple of years during the early 60’s. Later rekindling his interest in acting, he appeared in a handful of television series such as Karen (1964), Ben Casey (1965), Please Don’t Eat the Daisies (1966), and That Girl (1967). At the age of twenty, Dreyfuss made his feature film debut in the movie, The Graduate (1968)ーalbeit it being an uncredited role. It wasn’t until the next year, that the aspiring actor received his first major part on the big screen in, The Young Runaways (1968). Continuing with his budding career, he went on to appear in The Felony Squad (1969), The Bold Ones: The New Doctors (1970), You Are There (1971), and The Shadow of a Gunman (1972) over the next few years. After playing a number of minor characters, Dreyfuss received a big break in 1973 when he was cast as the main lead in the coming-of-age comedy, American Graffiti. 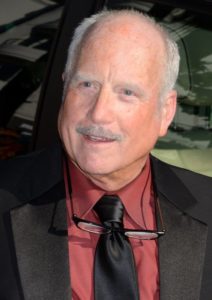 Considered to be responsible for the launching of his career, American Graffiti starred Dreyfuss as Curt Hendersonーa recent high school graduate who embark on multiple adventures with his friends. Starring alongside the actor as his on-screen friends are Paul Le Mat, Ronny Howard, Cindy Williams, Charles Martin Smith and Candy Clark. In a later interview, it was revealed that the main characters from the film were based loosely on the younger life of director, George Lucas; in particular, Curt was modelled after Lucas’ himself while he attended Los Angeles’ USC School of Cinematic Arts.

Released nationwide on August 11, 1973 after premiering at the Locarno International Film Festival, American Graffiti quickly proved to be a hugely popular amongst theatre goers. Met with unanimous praise, it grossed over $140 million by the end of its theatrical runーmaking it one of the highest-grossing films of its year. While it didn’t end up garnering much success out of the United States, it soon became a cult classic in France. Hailed as one of the most influential teen films of all time by film critics, American Graffiti currently holds a 95% rating on Rotten Tomatoes. Nominated for five Academy Awards, it has also been highlighted by many publications such as Variety Magazine, Time Magazine and the Chicago Reader. For his portrayal of the movie’s male lead, Dreyfuss was nominated for a Golden Globe for “Best Actor in a Motion Picture” in 1974.

Dreyfuss’ next big break came just four years later, when he was cast in the romantic comedy, The Goodbye Girl (1977). Directed by Herbert Ross, it featured him in the starring role of Elliot Garfieldーa maladjusted yet sweet aspiring actor from Chicago, who moves into a Manhattan apartment whose current occupants consist of a dancer and her ten year old daughter (played by Marsha Mason and Quinn Cummings respectively). Boasting an all-star cast list, the movie also included appearances from Paul Benedict, Barbara Rhoades, Michael Shawn and Theresa Merritt.

Screened on November 30, 1977, The Goodbye Girl was met with generally favourable reviews. Despite its predictable storyline, it garnered multiple praises for being a comedic, yet touching romance film. Given a perfect score by critic Roger Ebert, it became a massive financial successーtaking in over $140 million from just a $777,000 production budget. To this day, it remains to be one of the most profitable motion pictures of all time. Over twenty years after its original release, The Goodbye Girl was selected for preservation in the National Film Registry by the United States Library of Congress. Of course, it also won multiple accolades including an Academy Award which went to Dreyfuss for “Best Actor in a Leading Role”. Aside from that, the actor also received a Golden Globe, a BAFTA Film Award, and a LAFCA Award. 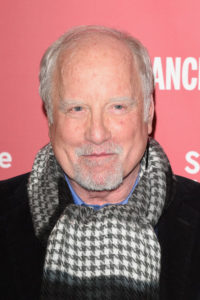 A decade later, Dreyfuss starred alongside Madeleine Stowe, Emilio Estevez and Aidan Quinn in the crime comedy, Stakeout (1987). Set in the city of Seattle, it revolved around a couple of police officers who are tasked with a stakeout of a young waitress. Playing the part of a lead character, the actor naturally took on the role of one of the copsーDetective Chris Lecce; his on-screen partner was portrayed by none other than Estevez. As the two continue their stakeout, Lecce eventually finds himself falling in love with the Latina (played by McGuire).

Released in theaters on August 5, 1987, Stakeout was a big success; not only did it gross over $5 million in its opening weekend but it also ranked number one box office. Commended for its sharp writing and good acting, it eventually went on to earn over $65 million worldwideーover four times that of its production budget of $14.5 million. A critical hit, the movie later won a BMI Film Music Award and an Edgar Allan Poe Award for “Best Motion Picture”.

In 1995, the actor received another breakthrough with the drama film, Mr. Holland’s Opus. Working with director Stephen Herek, Dreyfuss portrayed the role of Glenn Hollandーa professional music performer who in attempts of enjoying more time with his family, takes a teaching position at a local high school. Although initially resented by his colleagues, he later manages to win them over all while striving to make classical music more accessible to his students. Aside from the star, the movie’s cast also included Olympia Dukakis, Glenne Headly, Jay Thomas and William H. Macy.

Upon hitting the screens on December 29, 1995, Mr. Holland’s Opus was engulfed by a wave of popularity. In the United States alone, it earned well over $82 million in ticket salesーadding to that the $23 million that it took in internationally, the film ended up grossing a total of $106 million at the box officeーa huge figure compared to its $31 million budget. Recognized by the American Film Institute, Mr. Holland’s Opus currently holds a 74% approval rating on Rotten Tomatoes. While writer Patrick Duncan was nominated for an Oscar for “Best Screenplay”, Dreyfuss received an Academy Award nomination and a Golden Globe Award nomination for “Best Actor in a Motion Picture Drama”. 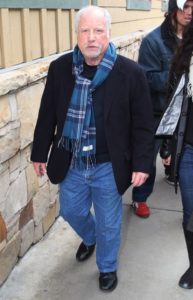 This year, the actor will be co-starring in a ten-part drama series called, Shots Fired (2017) alongside Sanaa Lathan, Helen Hunt, Stephan James, Stephen Moyer and Will Patton. Created by the wife and husband team, Gina Prince-Bythewood and Reggie Rock Bythewood, it will take place in North Carolina after a racially charged shooting. Currently in the post-production stages, it is set to be broadcast on the Fox Network sometime in the upcoming months.

Aside from the television show, Dreyfuss will also be starring in a film called Asher (2017)ーalthough further details about the project have not yet been revealed. What we do know is that, Ron Perlman, Nadine Velazquez, Jacqueline Bisset and Peter Facinelli will be joining the actor as members of the main cast.