What Happened to Sinbad – 2018 Update 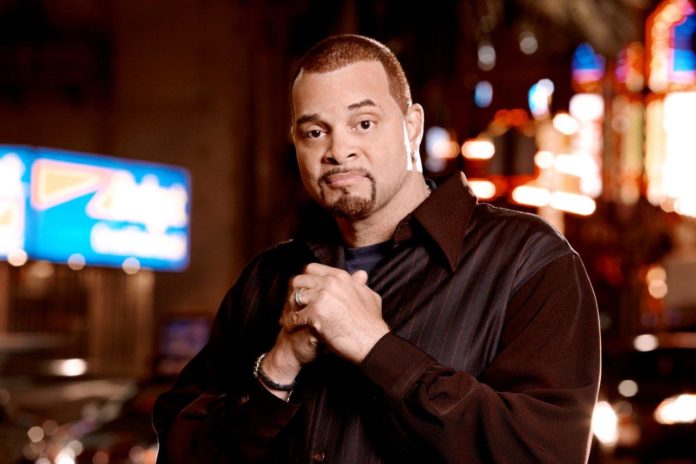 With cutting personal and political satire, Sinbad made a career for himself in making what was shocking or depressing into something funny. Through his multiple comedy specials and decades of tours, Sinbad has entertained millions, and with the events of 2016 and 2017, many are wondering: What is Sinbad up to now?

Born as David Adkins in Benton Harbor Michigan, was one of six children to a preacher. Growing up in Benton Harbor, Sinbad would participate in both Marching Band and Math club at his local high school, and would attend the University of Denver, with aspirations of becoming a basketball player. He would become an accomplished University player, however this would not turn into a career, and while starting to perform comedy, he would instead sign up for the United States Air Force.

Signing up as a Boom Operator for the 384th Refueling Wing, he would move to Witchita, Kansas, and quickly release a life in uniform was not to be his fate. Reportedly due to both his not making it to the Air Force Basketball team’s roster, Sinbad would go AWOL, and be dishonorably discharged for both this and reportedly “parking in the wrong spot” multiple times over. He would soon leave Witchita behind, despite gaining some popularity as a standup artist in the area.

Keeping his stage performance clean, he would enter into the Star Search competition soon after leaving Kansas and end up in the finals of the show, losing to a fellow comedian. This would give Sinbad his first shot at fame, by allowing him to get cast onto The Redd Foxx Show, where he would play the young Byron Lightfoot, son of Foxx’s character, Al Hughs. Unfortunately for all involved, the series would only last 13 episodes and would not be renewed by ABC due to low ratings.

A Different World and The Sinbad Show

Sinbad’s first consistent television appearance would be in the Cosby Show spinoff, A Different World and would last from 1988 until 1991. This role would later be stated as part of an expanding trend of African American actors and actresses getting roles of higher achievement, and would help Sinbad go from the role of part time actor and comedian to cultural icon.

Between his time on A Different World and his next successful jump to his own program, Sinbad would make a fair number of cameos as well as his own comedy special, Brain Damaged, which garnered plenty of positive acclaim. These would include two episodes of Bill Nye the Science Guy, as well as a role of a condom in Time Out: The Truth About HIV, AIDS and You. He would also be a star in the film Necessary Roughness, which would gain around $20 Million at theaters.

After Necessary Roughness, The Sinbad Show would see its first airing alongside very high ratings. Often praised for showing real life issues for African Americans alongside plenty of comedy, the actor would gain a nomination for a Kid’s Choice Award for best actor in 1995, despite the series ending in 1994. For the next five years, Sinbad would focus on the most part on his comedy career, releasing both Son of a Preacher Man and Nothin’ but the Funk. Of particular note, Sinbad would join Hillary Clinton and Sheryl Crow on a USO tour of Bosnia and Herzegovina. He would also appear on Nickelodeon’s All That, and several films including Jingle All The Way and The First Kid.

At the turn of the century, Sinbad would become somewhat slower in terms of production rate, but without loss in quality. His first hit of the 2000’s was during his three episode stint on Resurrection Blvd in 2002. Two years later, he would gain the title of the #78th greatest comedian of all time as rated by Comedy Central.

There would be another quiet section of his career until around 2008, when Sinbad released Thou Shalt Laugh 3. Unfortunately, the following year would be anything but a laughing matter for the comic, as he would be counted as among the top 10 worst tax debtors in his new home state of California, causing the sale of his home, assets, and almost certainly some marriage troubles with his wife Meredith Fuller, whom he had married in 1985, divorced in 1992, and remarried in 2002. All would be made right again for Sinbad when he released his special, Where U Been? In 2010 which he would send on tour as well as periodically adding new material. In 2015, he would return to the USO stage, this time in Afghanistan to perform for the troops.

As of 2017, Sinbad shows no signs of stopping. Currently performing at Improv clubs and making thousands laugh through his Twitter, it’s clear that Sinbad is very far from done with life, love or politics. In particular, Sinbad has thrown more than a few jabs at President Elect Donald Trump, finding more source material than he has known what to do with. Whether you love him or hate him, it looks like he’ll be bad, Sinbad, for many years to come.