The Blue Frog 22 Update – What Happened After Bar Rescue 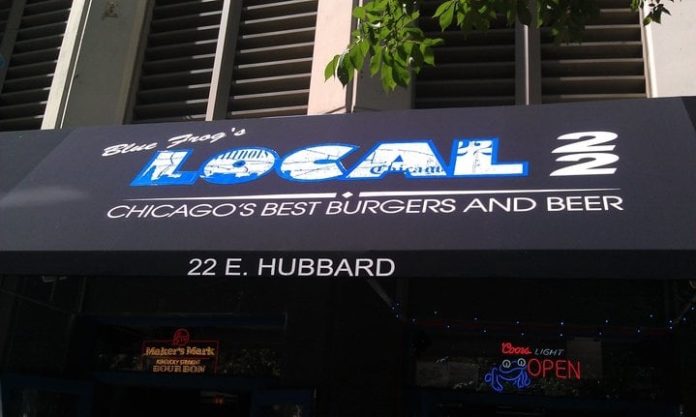 The Blue Frog 22 before Bar Rescue

The old facadeAfter retiring from her work as a sales manager Mimi Witschy used her savings to open the Blue Frog 22 and helmed it with her son John. The bar was situated at Chicago’s River North district which was considered as one of the city’s busiest neighborhoods. Patrons were usually composed of people looking for lunch at noon or something to drink after work, and the establishment enjoyed the surge of customers during their first few weeks. However management made poor choices in terms of decorating the establishment, choosing to make the place exude a childish atmosphere with board games and stuffed toys. This pushed away patrons who then sought other nearby establishments that had better ambiance than the Blue Frog 22.

As the customers dwindled, the profits went downhill as well.  And as the cash flow sank, the tensions rose. Mother and son locked horns and their arguments were often exacerbated by Mimi’s short temper. The bar accumulated $400 grand in debt and with no other choice left the Witschys decided to call Jon Taffer and Bar Rescue for help.

The Blue Frog 22 on Bar Rescue

Taffer’s wife Nicole visited the bar to check things out on a customer’s perspective. She first noticed that the bar looked like a children’s playroom complete with toys on the ceiling and board game boxes on the shelve. Some of the patrons even played board games while drinking. She then ordered food, a plate of macaroni cheese balls, and she found out on the first bite that it was still frozen inside. Mimi was also in the bar but she was drinking instead of performing her duties.

Taffer himself then entered next after his wife’s recon and he arrived just in time as Mimi and John were fighting in the kitchen area. He pacified the two and sat with them along with John’s wife Kelly who was the bar’s manager. Taffer noticed that Mimi was inebriated and she was quick to defend her drinking habit. She also stated that the juvenile décor was what made their bar unique which Taffer countered by saying that it was what drove customers away as the grown-up patrons couldn’t relate to the childishness of the place. Mimi’s domineering and prideful attitude was in full view of Taffer but eventually she relented and gave Bar Rescue her commitment to the upcoming changes to the establishment.

In the following staff meeting Taffer learned that the employees were having problems that stemmed from a lack of hierarchy. They don’t know who the general manager exactly was, not to mention Mimi herself not knowing the difference between being an owner and a GM, and this issue led to communication slips. Taffer then called for reinforcements namely renowned interior designer Nancy Hadley, chef Josh Capon, and beer connoisseur Jason Balducci.

Hadley toured the bar and labeled it as something like a toy chest. Under Taffer’s orders the board games and the toys were removed and stored away. Capon visited the kitchen area and noted the problems in food storage and preparation. Balducci checked out the bar area and saw the bad setup of the equipment which made operations less efficient.  Taffer convened with the staff and showed the statistics that there were barely any families in this part of Chicago. He also straightened out the hierarchy issues and finally had Mimi and John set on their right roles as owner and general manager respectively.

The following day Capon worked with John and the kitchen staff in improving the Blue Frog 22’s menu. Balducci delivered kegs of local beer and taught the bartenders how to serve high quality alcohol the right way. Taffer had Mimi go home for the night as he wanted to see how John works without his mother around when they put the bar on a soft opening. Customers praised the drinks but things fell flat on the food as confusion reigned in the kitchen and the orders were delayed. To add to their list of problems one of the beer taps in the bar area broke during the busiest hours of the night. Jay, the manager assigned to the bar area, was oblivious to the predicaments and instead focused his attention on a table where his friends were.  It was the right moment for John to flex his managerial muscles by reminding Jay of what must and must not be done.

The next morning Hadley and her team began working on the transformation of the Blue Frog 22. The bar was renamed to The Local with a strong focus on the best of Chicago. The façade now bore a black and white color instead of its previous palette. Inside the décor focused on Chicago and the bar area was decked with a redecorated refrigerator and a new turbo tap system for the beer faucet. Customers arrived for the grand reopening night and loved the new local focus of the establishment. John effectively led a cohesive staff as the general manager and his mother learned how to step back and serve as an owner.

A month after Taffer rescued the bar, sales have reportedly skyrocketed to almost 50%. Mimi was still hands off and let her son do the work.

Eventually they combined the old and new names of the bar to come up with Blue Frog’s Local 22. So far the reviews on Yelp have been mostly positive. One customer noted that the bar’s collection of six local beer taps have expanded to around 20, while another praised the huge selection of burgers. The local ambiance and the friendly staff were well-received and the addition of TV sets and karaoke helped in drawing more customers. On February 02 the bar added Bourbon County Stout to their tap.

In 2015 the bar filed a lawsuit that targeted the owners of the condominiums upstairs due to the scaffolding outside the Blue Frog’s Local 22 which was used to work on the windows. This prevented the bar from utilizing their sidewalk patio and in turn led to huge losses in profit. John exerted effort in blocking construction thru court orders but to no avail. The losses incurred by the scaffolding have come to the point where the owners asked for help on Facebook, urging people to visit the bar to somehow raise earnings.

Positive reviews also adorn their Facebook page with a good amount of five star ratings. They are also active in social media and frequently post about products and upcoming events. Click here to check out their page. If you fancy Twitter instead then click here for their account. They also have an official website which you can visit by clicking here.