Stand Up, Scottsdale Update- What Happened After Bar Rescue 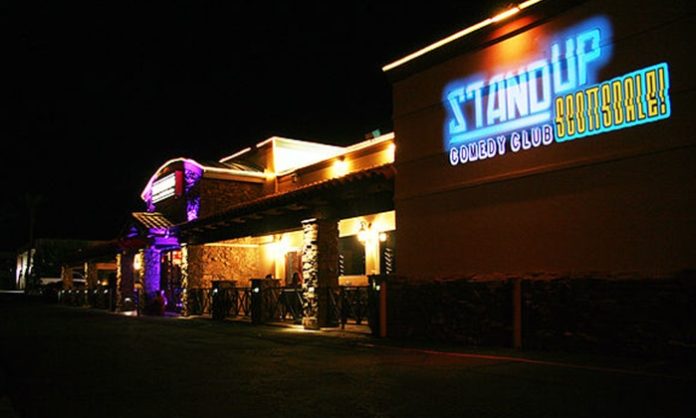 Stand Up, Scottsdale before Bar Rescue

Stand Up, Scottsdale, a comedy club based out of Arizona, was opened by Howard Hughes shortly after he finished performing a comedy circuit across the entirety of Arizona. Howard teamed up with investment banker Nathan Learner to open up the comedy club in 2012. Howard figured, “how hard could it be?” when Nathan put up $180,000 and planned to have Howard act as managing owner. Nathan saw promise in Howard and finds him a good guy. Upon opening, it became clear that Howard’s background in comedy did not translate to managing skills; the first month of opening, Stand Up, Scottsdale lost more than $19,000. Howard knew how to do almost nothing. Instead of growing into a role as managing owner, he sought to be the headliner of every show, which left his staff and business in disarray. The staff knows that Howard cares, but not how seriously they take it. Now, Stand Up, Scottsdale has a reputation with comedians for terrible house shows and even worse service. Nathan admits he is frustrated with Howard.

Stand Up, Scottsdale on Bar Rescue

Scottsdale, Arizona has a median household income of $72,000, which is nearly $30,000 more than the national average. Stand Up, Scottsdale has failed to grab any of the disposable income from the area. Outside of the club, Jon performs reconnaissance with his experts, Franky Marshall, an expert in mixology, and Gianluca Rizza, who has 25 years of experience in the comedy business. Franky points out that there is no way to see who is performing at the club, and Jon also explains that more than 2,500 cars pass Stand Up, Scottsdale daily. There is no marquee to showcase visiting comedians, which makes comedians far more likely to pass up performing at Stand Up, Scottsdale.

Jon then reveals he has had the comedy club under surveillance for 3 days. The key people are Shannon, Howard’s sister, Howard, and Nathan. Franky is sent into the 3,600 square foot comedy club with a front lounge with a display kitchen, a main stage with a green room behind it, and a small VIP area in the back of the show room. Inside the comedy club, Franky waits as the bartender talks to people. He is not selling, but is talking to people. Franky tries to grab his attention, but the bartender does not hear her or ignores her. Franky never gets a drink; a comedy show runs about 90 minutes, so there is little opportunity to get revenue from the bar. Jon explains that the bar should be accommodating for 20% of the revenue prior to the show.

Franky is led into the VIP area and seated in the back booth of the area, but Gianluca explains that they should crowd the front of the stage since laughter is contagious. If there is more laughter from up front, the back will quickly follow. Franky orders the s’mores martini, but the attendant points out that there is a two drink minimum. Howard takes the stage and asks which patrons have been here before by responding with applause; very few claps are heard. Then, Howard introduces Nathan, and explains that he has lost all of Nathan’s money. Gianluca explains that Howard needs to feed his ego and needs to be on stage.

As one of the comedians perform, a bartender in the back is mixing a shaken drink, which creates a lot of noise pollution and throws the comedian’s timing off. The kitchen is alongside the bar, which creates a smokey atmosphere and that really impacts the atmosphere of the comedy club. After 25 minutes, Franky’s martini finally arrives, and even from the car, Jon knows that the drink is far too sweet. She takes a sip and the look on her face says it all; it tastes like watered-down milk with alcohol in it. Most of the patrons are on their phones, so Jon actually calls Franky. Franky answers her phone without issue.

Jon and Gianluca enter the bar, and Jon immediately points out the horrible kitchen. Howard says that the bar is not the prettiest girl on the block, but continues to deflect with humor and poor jokes. Howard admits he does not know what to do, so Jon steps behind the bar. There is so much trash on the floor. The storage bins are unwashed and dirty. Howard is lost, and Jon points out that Howard is a comedian and not a manager. Jon says that he will be heavy on Howard, and points out that this exact situation is why his first wife left. Jon points out to Howard that he is an emotional mess. Jon then asks to head to the office, and Howard’s office is a pure mess of documents and papers.

In a meeting with the staff, including Nathan, Jon asks the employees what they think the problems are with the business. Waitress Brandy explains that there is no structure, another waitress says that people like to get up and leave early which frustrates the comedians, and an in-house comedian points out that there are dozens of distractions inside the club. All of these frustrations have been expressed to Howard, but Howard has not taken them into account. Howard then says that he would rather be on stage than working as a manager. 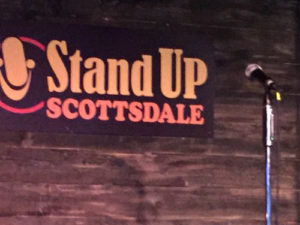 Jon introduces his two experts to the staff and explains that they will have a soft opening so Jon can see how they perform. Franky meets with the bar staff and starts to train the bar staff in making cocktails that are quiet and do not distract from the comedians. She has also brought with her a decibel reader; the goal is to not go over 50 decibels, which is when people get agitated. Brandy makes drinks and the decibel reader continues to rise over 70 decibels, which is horrible.

Gianluca meets with the in-house comedians and service staff, starting with a roleplay scenario. He is the customer, and the staff will show him what they do to every customer. Gianluca is seated away from the stage, and he is made to feel like less of a customer because he is sat farther away from the stage. Their goal is to reach 100% capacity, but Howard has a strange business sense. He feels that the customers trust the staff to take care of them. During the soft run, Howard is overwhelmed by the failure of the operation. He retreats to the upstairs, and he blew it all for his customers, his staff, and his comedians.

Stand Up, Scottsdale Now in 2018- The After Bar Rescue Update

To help revitalize Stand Up, Scottsdale, Jon has brought in Owen Benjamin who has appeared in movies alongside Adam Sandler and Anna Farris. Owen gives his opinion on everything, which is all rather lackluster. With the help of Owen, Howard now has a more focused view on how to work as a comedian and as a manager. Jon then reworks the entire layout of the bar and has even asked Howard and Nathan to go to a comedy club called “The Laugh Factory,” which is a huge Hollywood attraction. The owner says that he is willing to help out Stand Up, Scottsdale. The comedy club is rebranded to be a part of The Laugh Factory.

Stand Up, Scottsdale has since reverted to be itself, and is no longer part of The Laugh Factory. Stand Up, Scottsdale is now highly-rated with the intervention of Jon Taffer, and has a highly-rated 4 star review on Yelp with people praising the atmosphere and quality of service for both food and drinks. The club is still operated by Howard and Nathan still serves as an investor in keeping the bar operational.