Artie Coury opened Alibi in 1998 as a fulfillment of his dream of having his own bar after working in one for several decades. He named it so as everybody needed an alibi in Las Vegas, and he hired his longtime pal Joey as Alibi’s manager. The establishment was the ideal haunt for patrons who steered clear from the overcrowded Strip and managed to rake in half a million bucks in just a single year. While Alibi brought in a lot of dough into Coury’s pockets the owner had all the time in the world for his passion: motorcycle racing.

Things took a deadly swerve when Coury had a near-fatal accident during a race and his long road to recovery kept him away from Alibi for a long time. With the boss out of the scene the mostly-female staff went wild in the bar and, despite the customer-repelling behavior of the workers, manager Joey unfortunately had no authority to axe these raunchy employees. When Coury returned to the Alibi he gave it a race-themed facelift as a reminder of his days in the tracks, and he didn’t even lift a finger to reprimand the erring workers. The new theme however did not click in Clark County, an area in Las Vegas that’s mostly female.

With an out of control staff, a bar devoid of customers, and six digits in debt, Coury made the call for a Rescue.

Alibi’s outside signage had a red arrow that pointed towards the wall instead of the entrance. The bar also discounted Bloody Mary cocktails for $2, a move that actually did more harm than good as patrons would think that the drinks are of poor quality hence the incredibly-low price. For the recon Jon Taffer sent in two pairs, one of men and the other women, and the guys were immediately tended to by the bartenders while the ladies had to wait for ten minutes before Joey approached them. Most of the bartenders were also drunk and showed disrespect towards Coury. As the recon progressed the spies not only got a taste of Alibi’s bad food and drink, they also witnessed the inappropriate behavior of Coury and the employees like making good use of offensive language and playing with a blow-up doll.

Taffer entered the bar and summoned the workers for a meeting, and the bartenders were quick to admit that they chugged booze straight out of Coury’s pocket. The Bar Rescue host was further infuriated by the owner’s admission of sexual remarks towards the female spies and the sight of the blow-up doll had Taffer walk out of the place with hopes that these perversions and inebriations were gone the next day. The Alibi staff complied when Taffer and the experts returned the following morning.

Bartender Mia Mastroianni inspected the bar area and saw a lot of clutter taking up much-needed space, and the neglected drainage and beer cooler harbored bacterial colonies. The kitchen had numerous fire hazards thanks to the coats of grease in almost every nook and cranny, and improper food storage practices put the stomachs of patrons at risk. After an exhaustive cleaning process Mastroianni and Liberato subjected the employees to some bit of training to correct their erring ways in preparation for a stress test.

The kitchen was the first to falter during the test as the staff forgot to season the steaks while the tickets kept coming in. A third of the steaks served were returned to the kitchen and management comped these rejected plates which was a big no-no. Bartenders struggled to whip out decent cocktails and, adding to their growing list of problems, the number of orders outnumbered the bar’s number of glassware. Coury helped by washing the used glasses but he slipped and broke almost half of the bar’s stock.  On a positive note the efforts of the sobered-up staff gained praise from Taffer.

Taffer revealed his plans of ditching the bar’s race-inspired theme in favor of a female-oriented concept and Coury was not very receptive of this idea. The two sat together and Coury revealed his life-changing accident to Taffer and its role in diminishing his zest towards the bar business. Taffer suggested giving authority to Joey for the bar’s sake and Coury complied. Mastroianni introduced cocktails geared towards the ladies like the Bubbly Black Rose and the Dessert in a Glass, and she taught the bartenders how to pour accurately with the use of a bar jigger. Liberato implemented guilt-free finger foods for the new food menu like fresh produce and turkey meatballs.

36 hours later Alibi was renamed to Garnet Lounge and the new name speaks volumes in terms of affordable quality. The interior was decked with red colors, artworks depicting high heels hung on the walls, textures and patterns, and velvet seating. The underutilized space behind the counter was turned into a premium liquor bottle display and the back bar was outfitted with mirrors to give the illusion of spaciousness. The employees were given simple formalwear as their uniform so they’d be as stylish as the patrons. Despite having some problems during the relaunch Garnet Lounge’s employees caught up with excellent food and drink plus commendable serving times.

Taffer’s rescue put the Garnet Lounge on the track towards success.

Alibi Now in 2018 – The After Bar Rescue Update

Garnet Lounge enjoyed a 20% boost in sales six weeks after the rescue.

There are a good amount of positive reviews on the bar’s Facebook page while on Yelp there were only two feedbacks, and one of them criticized a certain bartender’s lack of skill.

Unfortunately Garnet Lounge made an announcement near the tail end of 2013 regarding its closure due to industry changes and the economy. They held one last New Year’s Eve farewell party before closing the doors down for good. The closure happened around two months after their rescue occurred, thus ending their run of more than 20 years. In an interview with Forbes Taffer mentioned that the bar’s debt contributed to their downfall. (Read the interview here) 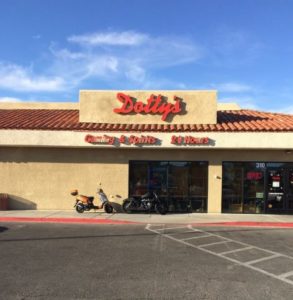 The bar’s Facebook page is still up although it is inactive. Click here if you want to pay it a visit.