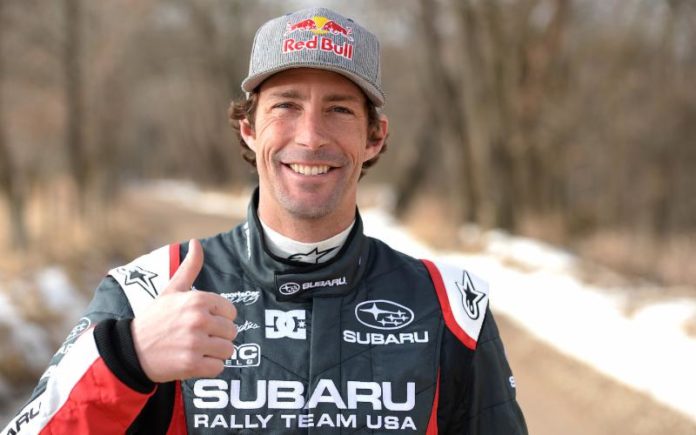 Travis Pastrana is one of the most acclaimed stunt performers in the entire world. He is known for many things, but one of his largest claims to fame is being the first person ever to complete a double backflip on a motorbike in competition. He also acquired success from his television show Nitro Circus, which aired on MTV. However, more recently, Travis Pastrana hasn’t been in the news nearly as often as he used to be. What exactly has he been up to in 2017?

Travis Pastrana was born in October of 1983 in Annapolis, Maryland. He became very interested in motorsports at a young age, and his parents were supportive of his interest. When Travis was just four years old, he obtained his first motorbike. Unlike most kids his age, who were more focused on racing around or just remaining upright, Travis was more interested in performing stunts. That doesn’t mean that he wasn’t a strong racer, though. He participated in many small local races for many years, but he often had to deal with the dangers that come with the hobby, as well. Even when he was very young, he was dealing with major injuries that he acquired as a result of motorsports. At the age of fourteen, he dealt with a particularly awful accident that left him in a wheelchair for three months. Unlike most other kids, who would probably be deterred by this kind of incident, Pastrana remained on the path to greatness, and he kept at it. 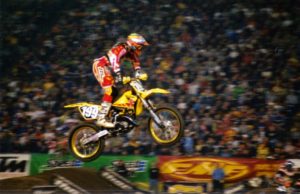 By 1999, when he was just sixteen years old, he made his first appearance in the X-Games, winning gold in the first ever Moto X Freestyle event. With this win, Travis really put himself on the radar of extreme sports. He was a very young guy, but he definitely had talent. A year later, he would return to the X-Games and win gold again in the Moto X Freestyle event. The year after that, he would do the same thing. This means that there was an extended period of time where Travis Pastrana was the only person in the world to have won gold in the Moto x Freestyle event. Needless to say, he had proven himself as a dominant power in extreme sports. In 2003, Pastrana made the decision to branch out into a couple of other pursuits. He began a career in rallying, with his career debut coming at the Race of Champions, a major international motorsports event.

That didn’t mean that he was planning on retiring from extreme sports or anything like that. In 2003, 2004, and 2005, he won two gold medals and a silver medal, continuing to prove his dominance in the game. Pastrana was also able to prove his dominance elsewhere in 2006 when, with co-driver Christian Edstrom, he won the gold medal in the X-Games’s first rally car competition. This was especially impressive considering that, in order to win it, he had to defeat Colin McRae, who is widely considered to be one the greatest legends in rallying. Later that year, Subaru Rally Team USA announced that Travis would be participating in World Rally Championship events in the years to follow. Needless to say, Travis Pastrana had become a major figure in motorsports of all kinds.

During the early 2000’s, Travis had a little fun project that he would spend time with during his spare time. He and his friends would create videos of them all getting into various hijinks and performing different stunts, and these videos were released in the form of DVD. The first installment of this series was called Travis & the Nitro Circus. Many of these DVD’s were produced during the early 2000’s, and they were able to gain a good amount of popularity due to Pastrana’s increasing influence in extreme sports. The DVD’s sold very well, and in 2006 a show called Nitro Circus began airing a miniseries on Fuse TV, which is now known as Fox Sports 2. Around this same time, Pastrana’s success went through the roof even in the mainstream due to his double backflip feat that he performed at the 2006 X-Games. 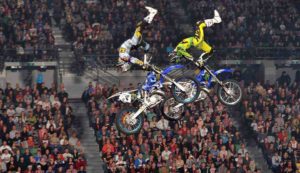 Since both the miniseries and the DVD’s were commercially successful, Travis and his friends were able to get a show on MTV, which obviously had a much larger audience than Fuse TV. The show aired as a reality television show, and it showed off stunts as well as the personalities of the people who were performing them. Travis was undoubtedly the ring leader of the group, but he was joined by a lot of other talented individuals, including Joele Van Vugt, Erik Roner, Greg Powell, Andy Bell, and Jim DeChamp. Nitro Circus began airing on MTV in 2009, and as the show became more and more popular, it was able to land guest stars who were big players in extreme sports, like Lyn-Z Adams Hawkins, Chad Kagy, and Blake Williams. Nitro Circus ultimately met its end on MTV after its second season, but it continued to live on for much longer than that.

Starting in 2012, Nitro Circus Live began its run. The show was much more reality-based than the previous series, as it followed the circus as they performed in live shows around the country. The show aired on MTV2, and it was still being produced by Jackass’s Dickhouse Productions. Not only was the Nitro Circus able to fill stadiums in order to perform live shows, but they also had millions of people watching the behind-the-scenes for these live shows on television! When Nitro Circus Live ended in 2014, however, I think it’s safe to say that Travis seemed to drop off of the map to the casual fan. The show cataloged all of the different shows that Travis and the Nitro Circus would put on, so does the show ending indicate that those shows ended? Is Travis Pastrana still involved with the Nitro Circus? What is Travis Pastrana doing now in 2018?

As it turns out, even though Nitro Circus Live isn’t on the air anymore, the Nitro Circus is still busy doing what they do best. In March of 2017, they are currently set to put on a series of shows in Australia. Travis is still definitely a very part of this action sports collective, but that doesn’t mean that he doesn’t do a few other things, too. He has been keeping up his career in rallying, and in 2016 he participated in the Lake Superior Performance Rally, the Oregon Trail, the Susquehannock Trail Rally, the Ojibwe Forests Rally, and the 100 Acre Wood. To this day, he is still doing his rallying under Subaru. Although you may not seem him on major television networks as often as you used to, fans of this extreme sports athlete should rest assured in knowing that Travis Pastrana and his Nitro Circus are still hard at work astonishing people with their tricks and stunts.