What Happened to Benji Madden – News and Updates 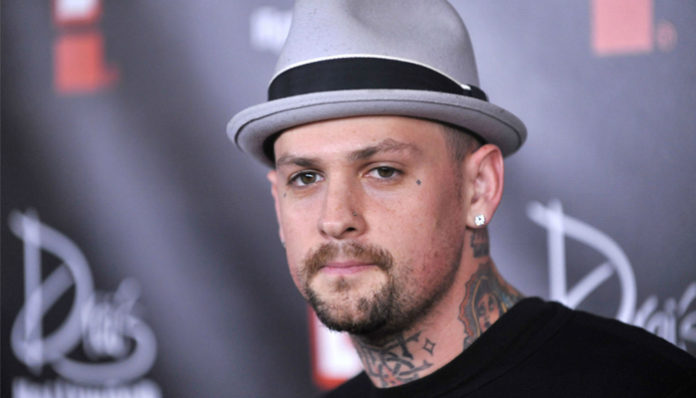 Benjamin Levi Maddens- otherwise known as Benji Maddens, is best known for being the lead guitarist in the pop punk band, Good Charlotte. Born in La Plata, Maryland, he was inspired to create a band after attending a Beastie Boys concert with his twin brother as a teen. At the age of eighteen, he picked up his first instrument- the guitar. After the two traveled to California, the birthplace of all punk rock bands, they returned more determined than ever to form their own group. Teaming up with a couple of close friends who shared their interests, they eventually began performing music as the alternative rock music group, Good Charlotte. Striving to make a name for themselves in the pop rock scene, the band took to the stage at a number of venues in Washington, D.C during the mid to late 90’s. By 1999, they had garnered a local fan base and had released a couple of demo tapes and extended plays.

After signing with Epic Records, Madden and his crew released their first self-titled album, Good Charlotte in the fall of 2000. A moderately successful debut, it charted on the Billboard Top 200 and have since gone Gold in the United States. However, it wasn’t until 2002 that their popularity soared with the release of their second album entitled, The Young and the Hopeless. A critical hit, it remains to be the group’s best selling album to date, having sold more than 3,000,000 copies domestically since it was first released. Since then, Good Charlotte has released four additional studio albums, The Chronicles of Life and Death (2004), Good Morning Revival (2007), Cardiology (2010), and Youth Authority (2016). Aside from that, they’ve also released nineteen music videos, three video albums, and twenty singles- most of which have found its way on to the charts. The pop punk band is probably most well known for their hits Lifestyles of the Rich and Famous, Girls & Boys, Predictable, I Just Wanna Live, and Keep Your Hands Off My Girl.

Aside from his work with Good Charlotte, Madden is also the other half of the pop rock duo, The Madden Brothers- the other member being that of his twin brother, Joel Madden. Formed in 2011, he mainly serves as the backup vocalist and rhythmic guitarist. In November of that year, they released their initial mix tape, Before – Volume One. A single release later, they came out with their debut studio album entitled, Greetings from California in 2014. Outside of recording, Madden has also appeared numerous times on television in shows such as Australian Idol (2009), The Best Hit USA (2010), Chelsea Lately (2010), The Tonight Show with Jay Leno (2012), and Ben Baller (2012).

What has the Maryland-native been busy with as of late? Does he have any new projects lined up for the new year? Will he be collaborating with his twin brother? What happened to Benji Madden? Where is he now in 2018? 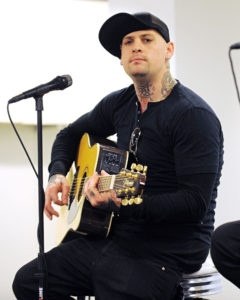 Born on March 11, 1979 in La Plata, Maryland, Benji Madden (Birth Name: Benjamin Levi Combs) is the son of Roger Combs and Robin Madden; he has an identical twin named Joel Madden, a younger sister named Sarah and an older brother named Josh. At the age of sixteen, his father left the family- this subsequently caused him to change his last name from “Combs” to his mother’s maiden name, “Madden”. Raised solely by his mother following the event, the family often faced financial difficulties while he was in his teens. Despite that, he had always found solace in music; in fact, he had always been inspired to form a band after going to a Beastie Boys concert with his twin brother when they were younger.

After graduating from La Plata High School in Maryland, Madden and his twin brother were given a huge opportunity when their mother offered them a trip down to California- the birthplace of most punk rock bands. Following their trip, they came back more determined than ever to create music. Recruiting a few friends from school that shared their interests and ambitions, the Madden brothers soon formed the alternative rock group, Good Charlotte. Working to make a name for themselves in the late 90’s, they performed at a number of events and venues in and around the Washington, D.C. area, including at the annual WHFS rock show. Before long, the group had garnered a small, but devoted fan base in and around the area. Prior to signing on with a label, they also released two EPs and two demo tapes. 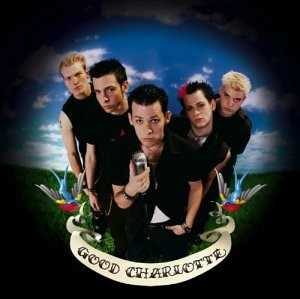 Shortly after forging a contract with Epic Records, the crew dropped their eponymous debut album entitled, Good Charlotte in 2000. Influenced by the work of the American rock band, Lit, its production was handled by John Feldmann and Don Gilmore.

The only album to feature drummer Aaron Escolopio (who left the group following its release), it ran for approximately forty-five minutes. Featuring material written almost entirely by Madden and his twin brother, some of the titles included I Don’t Wanna Stop, Let Me Go, Thank You Mom, The Motivation Proclaimation, Festival Song, Little Things, Complicated, I Heard You, and I Don’t Wanna Stop; two additional songs, If You Leave and The Motivation Proclaimation (Live Version) was also released in the Japanese version.

Considered a strong debut for the group, Good Charlotte peaked at number one on the Billboard Top Pop Catalog Albums Chart a year after it was released; in between, it also managed to reach number thirteen on the Billboard Top Heatseekers. Internationally, it also charted in New Zealand and Japan. Reception wise, the album garnered both positive and negative reviews; for example, Entertainment Weekly awarded it a score of A- while critics writing for Allmusic gave it a three star rating, having noted the mixed messages in the band’s songs. Regardless, the album soon became Good Charlotte’s first RIAA-certified disc, having achieved over 500,000 sales as of January 2003.

In the fall of 2002, two years after their solid debut, Madden and the band came out with the second full length album, The Young and the Hopeless. Put together at Los Angeles’ Barefoot Studios, the project was produced by John Feldmann and Eric Valentine, the former of whom the group worked with for their debut release. Their most successful album to date, it boasted a fourteen-title track list, which consisted of My Bloody Valentine, The Story of My Old Man, A New Beginning, The Day That I Die, Say Anything, Movin’ On, Riot Girl, among a few others- all of which were written by the Madden brothers.

Quickly proving to be a commercial success, it entered the Billboard Top 200 at the seventh position; during the first week, over 117,000 copies had been sold. To promote for the album, the Good Charlotte also toured tirelessly for 365 days; their hard work ultimately paid off as it eventually sold more than 3,000,000 copies in the United States- making it their first Multi-Platinum album in the country. Despite the figures that it pulled in, The Young and the Hopeless received primarily mixed reviews; while Mark Beaumont writing for NME gave it a positive 8/10, most critics panned it for its predictability and abundance of generic tracks. To put things into perspective, the Rolling Stone awarded the album a two star rating, as did Uncut Magazine. 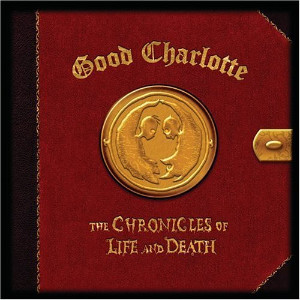 Two years later, the group dropped their third studio album entitled, The Chronicles of Life and Death. Approximately an hour in running-length, it was unique in that it came in two separate versions- a “Death” version and a “Life” version, both of which featured a different cover art and bonus track. The only Good Charlotte album to feature drummer Chris Wilson, it also marked a departure from their previous sounds as it incorporated many new elements such as organ, and strings; its lyrics were also more serious in subject matter. Produced by Eric Valentine, The Chronicles of Life and Death saw fourteen tracks, some of which included We Believe, Secrets, Ghost Of You, Walk Away (Maybe), Once Upon a Time: Battle of Life and Death, and The World is Black.

Although not as big of a smash hit as its predecessor, the album still enjoyed relative commercial success, having reached number three on the Billboard Top 200; it also peaked at number three on the Billboard Comprehensive Albums and at number one on the Top Internet Albums Charts. Met with acclaim overseas, the album- which featured material written mostly by Madden, also charted in various other countries such as Finland, France, Japan, New Zealand, Australia, Canada, Switzerland, to name a few. While reactions to the album were generally mixed, it later went on to sell over 1,000,000 copies in the US, making it the group’s third consecutive RIAA-certified album.

Continuing to put out music with his band, Madden and the group came out with their fourth full length album, Good Morning Revival on March 27, 2007. Titled by Madden himself according to an interview with Billy Martin, its production was handled by Don Gilmore, who helped to produce their debut album. Recorded in between Vancouver and Los Angeles, the pop punk album came with thirteen tracks on the standard edition; some titles include Break Apart Her Heart, Beautiful Place, Something Else, Broken Hearts Parade, Good Morning Revival, Victims of Love, Dance Floor Anthem, and The River. Aside from the standard version of the album, iTunes, Wal-Mart and Best Buy exclusive editions were also made available.

Not long after it was released in stores, Good Morning Revival charted at number seven on the Billboard Top 200; it also reached the top ten in Australia, Canada, Germany, Switzerland, and New Zealand. Similar to their earlier efforts, critical reception was generally mixed; while some panned the quality of its lyrics, others such as Entertainment were more lenient, having awarded it a score of B-.

In 2011, Madden brothers got together to form the appropriately titled pop rock duo, The Madden Brothers. In November of that year, they released their first mix tape, Before – Volume One (2011). Although they originally had a studio album planned for late 2012, it wasn’t until two years later in 2014 that they came out with their debut album, Greetings from California. Produced by their long-time collaborators Joe Chiccarelli and Eric Valentine, the album and its contents were met with praise upon its release. 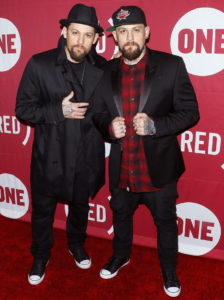 In case you you weren’t aware, Madden and his band are currently on the road for their Youth Authority Tour. Their first US trek in six years, it kicked off last October and will be continuing well into the summer of 2017, judging by the schedule posted on their official website. If you want to see Good Charlotte perform up on stage,here’s your chance- tickets for many of the shows are still available.

Aside from music, Madden seems to have many things going for him. For instance this past January, he starred as one of the featured contestants on the culinary reality show, Masterchef Celebrity Showdown 2017, where he (and his brother) had a cook-off against other celebrities such as NeNe Leakes, Grace Gealey, Jordana Brewster, Tiki BArber, and Anthony Anderson.

If you’d like to keep in touch with the 37-year-old rock star, you can do so by following him on social media- you can find Benji Madden on Twitter at @benjimadden or on Instagram at @benjaminmadden.