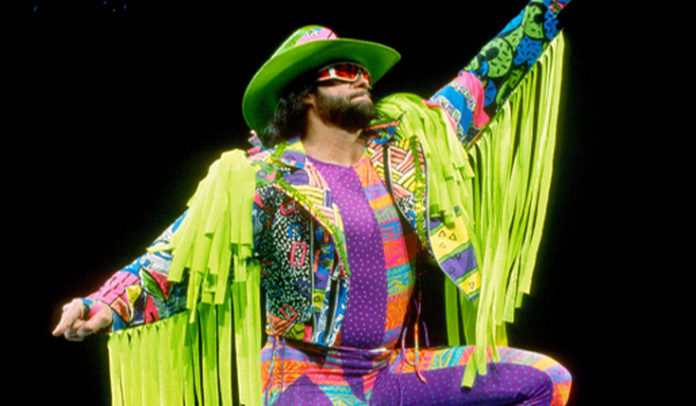 I’ve had something of an obsession with professional wrestling recently. The world of wrestling is so interesting to me, a combination of fact, fiction and athleticism. There is literally no other art form, high or so called “low”, like it in the world. In the beginning it was a bare bones affair. Everyone involved was beholden to the kayfabe. You did not break character, and you did not let anyone know that what went on in the ring was a performance.

It might seem ludicrous today that anyone effusively bought the shenanigans that went on in the ring back in the heyday of the National Wrestling Association, but bear in mind that the likes of Hulk Hogan were a long way off. The characters were only slightly larger than life, and it wasn’t until the late seventies, or early eighties, that they grew to the gargantuan caricatures that we remember fondly today. There are few wrestlers that embodied that unbridled exuberance, that commitment to the bit, more than Macho Man Randy Savage.

These articles are usually about what the star is doing these days, but sadly Randy passed away in 2011, what follows in a brief look at his life, and a look forward as to where his legacy lives on.

Randy Savage was born Randy Mario Poffo on November 15 1952 in Columbus Ohio. He comes from a minor dynasty in the scene of wrestling, his father was a popular wrestler before him. It is fairly common for sons and daughters of wrestlers to move into the business eventually, but Randy decided to go into a different field first. He was hired out of High School as a catcher for the St Louis Cardinals. He played in the minor leagues for a number of years to develop, injuring his dominant arm in a collusion and retraining to throw with his left. His baseball career did not last that long, and his final season, 1974, overlapped with his debut onto the wrestling scene.

In wrestling there is a sort of game that needs to be played. A kind of politics played between bookers, talent and other talent. You “pay your dues” so to speak, with the top talent in a promotion, with the intention of building a name for yourself and eventually being booked to win a title or two, a high profile victory, or a key story line. And of course more money. Back in the mid seventies there wasn’t the money that is in the business now, but there was enough to make a decent living off it. Randy had a bit of a head start going in, what with his father already in the business, and it is that familial link that helped him get his early pushes, but not with his first promotion.

Randy’s first gimmick was a character based on Spider-man, called The Spider. This would prove prophetic, as he would go on to play Bonesaw in the Sam Raimi Spider-Man flick, opposite Tobey Maguire. He soon adopted the ring name of Randy Savage, at the suggestion of Terry Stevens and the legendary Ole Anderson. Randy’s time at GCW, Georgia Championship Wrestling, lasted a few years before his father, Angelo, had had enough of the lack of push his son was receiving. He started his own promotion, the ICW, an outlaw promotion not beholden to the NWA.

For much of the ICW’s existence the heavyweight title passed between Randy or his brother Lanny. The firm had a rivalry with the Continental Wrestling Association, a promotion owned by the incomparable Jerry Lawler. Randy developed a bit of a feud with Lawler, and when the ICW folded in 1984 Savage was able to make the transition to that promotion seamlessly. Randy Savage’s feud with Jerry Lawler is legendary, with matches par excellence and stellar performances from the pair. In looking through his career it is clear that this is where the Macho Man became the Star that we all remember. A mere year after joining Lawler’s promotion Randy made the move to the WWF, now WWE.

Even in 1985 the WWF was a powerhouse. ’85 was a landmark year for professional wrestling, it was the year of the first Wrestlemania, and while Randy was a little late for that main event, he still exploded onto the scene, in an era with so many Superstars. Randy was billed as the top free agent in the business, a marketing gimmick that is still going strong today. Late in 1985 he feuded with the then Intercontinental Champion Tito Santana, with Savage eventually beating hi the following February

Winning the Intercontinental Championship was not a huge deal back in the day, and it is a due to Savage’s reign that the title gained much of the prestige that it has. Savage’s early WWF career had him playing a heel, that is a bad guy in the company, but his raw charisma, not to mention his idiosyncratic promo cutting, allowed him to gain a substantial following. It was not long before he was cheered by the crowd, despite his heel status. People just loved his wonderfully ridiculous style.

While his theatricality was a big part of his draw, his skill in the ring should not be understated. In 1987, at Wrestlemania III, Savage put together what is, in my mind, one of the best matches of any Mania. In an intercontinental title defense against Ricky Steamboat Savage was pinned, losing the title after a 14 month reign. Unlike the majority of bouts, the match with Ricky was highly choreographed. A total of 19 2-counts built tension throughout the bout, and the spots were both gorgeous to look at, and textbook perfection. It was voted best match of 1987 by both Pro Wrestling Illustrated and Wrestling Observer Magazine, honors it very much deserved.

1988 was the year of Savage. It marked his official face turn, and it was the year he won his first WWF World Heavyweight Championship title. His run at the WWF was the high point of his career, with Savage achieving international success and recognition for his talents. His first retirement, a theme in wrestling, came in 1991.

He did not disappear from the company though. Savage stayed on as a color commentator, and participated in a few angles as a non wrestler. This lasted from 91 to 94, when he made a move that, without knowledge of the financials, few could have predicted. He jumped to WWF’s main rival, the WCW.

The WCW Vs WWF era in the nineties, known now as the Monday Night Wars, was a fascinating time in professional wrestling. Marked by intense battles for ratings between the two firms, bringing in talent from all over the world with Vince and Ted’s deep pockets. Viewers got to enjoy so many different styles of wrestling, and narrative techniques as well. Savage was a key player in the Outsiders stable, the primary team opposing the infamous nWo. Of course with twists and turns the hallmark of wrestling story telling it wasn’t long before Randy jumped ship and joined the nWo. The mid nineties had the WCW and Savage reach new heights of stardom and popularity, eclipsing even the 80’s wretling boom. The WCW’s popularity began to wane in the late nineties, with the WWF’s Attitude brand becoming the premier product on the market. At the same time Savage was winding down for what would be the last time. He retired again in 2000.

Since then Savage made regular appearances at other promotions, and even wrestled a little at the fledgling TNA promotion, now known simply as Impact! Wrestling. Savage comes from a time in wrestling when the back stage vices were far more harmful that they tend to be these days. Steroid use was rampant, and other drugs were habitually used by many before going out to hype up a crowd, or cut a promo. It is at least somewhat arguable that a few of Savage’s more memorable promos were cut with a little cocaine. I mention this because it is important to understand what led to his untimely death. Savage’s skill with the mic might have been artificially enhanced, but he still rocked it better than the vast majority in the business.

In mid 2011 Savage passed away of a heart attack. He was only 58, but a quick look through the annals of professional wrestling history will tell you that many who go into the ring and adopt the lifestyle meet unfortunate ends. 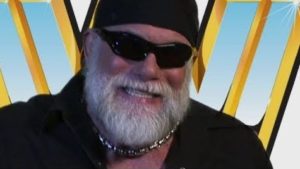 After his death many promotions paid homage to his life. In 2015 he was post-humorously inducted into the WWE Hall of Fame, with Hulk Hogan inducting. His brother, Lanny Poffo spoke on his behalf. He talked about the purely emotional response he had when he heard the news. For years folk had been waiting for his induction, and I agree that it was long past due.

Savage was a master of his craft. He could preform in the ring with the best of them, a combination of brawling and more technical skills, and he helped elevate the art of professional wrestling. He brought the irreverent to the fore, he allowed the ridiculous to be taken seriously, and he has provided us all with hours and hours of enjoyment. You can see his style carrying forward, you can see the younger wrestlers who grew up watching the Macho Man, emulating him a little. To my mind the recent popularity of Matt Hardy’s “Broken” character owes an awful lot to the majesty of the Macho Man.