What Happened to Paulina Rubio – 2018 Updates 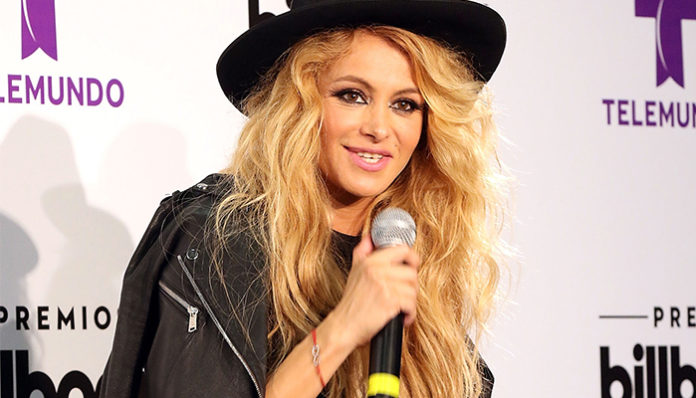 Mexican singer Paulina Rubio kick started her music career as a member of the pop-rock band, Timbiriche in the 80’s. The daughter of a renowned actress, she started to sing at the tender age of five. Not only was she blessed with amazing vocals, but she was also talented in acting, painting and dance. At the age of eleven, she was recruited into the popular children’s group, Timbiriche and brought under the wing of Miguel Bose.

That same year, the girls released their debut studio album, Timbiriche (1982), which proved to be a relative success in their native Mexico. From there, they would go on to record ten additional albums, prior to Rubio’s departure in 1991. By then, the artist had made the decision to embark on a solo music career. Forging a recording contract with EMI Music, the Mexico-native soon began to work on her debut effort. At the age of twenty one, Rubio came out with her debut album entitled, La Chica Dorada (1992).

Effectively bringing her into the spotlight throughout the Spanish-speaking world, the album successfully peaked on the US Latin Pop Albums Chart; not only that, but it has since also gone Platinum in Mexico. Continuing with her flourishing career, Rubio later followed up with a second album entitled, 24 Kilates in the fall of 1993. Since then, the Mexico-native has released eight additional studio albums including Planeta Paulina (1996), Border Girl (2002), Ananda (2006), and Gran City Pop (2009), among a few others- many of which have obtained certification in her native country. Aside from her full length albums, the artist has also released five extended plays, and well over forty different singles. Some of her more popular titles include Mio, Amor De Mujer, Abriendo Las Puertas Al Amor, Y Yo Sigo Aqui, and Don’t Say Goodbye. As of 2016, Rubio has sold over 20,000,000 records across the globe.

Aside from her accomplishments as a recording artist, Rubio has also done work as an actress throughout the years. In fact, she made her feature film debut back back when she was just twelve years old in El Did Del Compadre (1983). Her next appearance on the big screen came in 1995 when she played a character in the Spanish romance comedy, Besame en La Boca. As an actress however, most of her work has been on television. In 1988, she was cast as a lead role in the telenovela, Passion y Power. Some of her more recent TV projects include Atrevete a sonar (2009), La voz Kids (2013), Jane the Virgin (2014), and Nuestra Belleza Latina (2015). In 2013, she even made a special guest appearance in the popular American reality show, The X Factor.

So what has the Mexican artist been up to since then? Will she be releasing any new singles or albums this year? What can fans expect to see from her these upcoming months? Has she been cast in any new acting roles? What happened to Paulina Rubio? Where is she now in 2018? 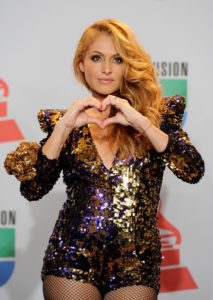 Born on June 17, 1971 in Mexico City, Mexico, Paulina Rubio (Birth Name: Paulina Susana Rubio). A natural performer ever since she was a young girl, she danced, sang, and acted from the tender age of two. After two years of studying at the Centro de Education Artistica in Mexico, she was approached by Guillermo and Julisa del Bosque about joining a new children’s music group that they were forming. Jumping at the opportunity, Rubio- who was only ten years old at the time, soon kick started her singing career as a member of a pop band called Timbiriche.

Consisting of seven members (e.g. Sasha Sokol, Mariana Garza, Diego Schoening, Alix Bauer Benny Ibarra), they eventually released their debut album, Timbiriche in 1982. Later that same year, the group came out with another full length album entitled, La Banda Timbirche. Over the next few years, Rubio continued to hone her singing with the group; by the end of the 80’s, they had released a total of eight studio albums. After ten years of recording with the pop band, Rubio chose to separate from the group, to embark on a solo music career. 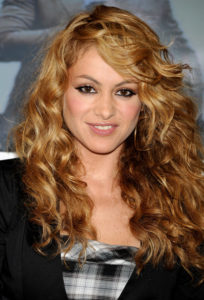 Met with a positive reception in Mexico, La Chica Dorada peaked at number two on the US Latin Pop Albums Chart and number forty two on the US Latin Albums Chart. In fact, many have adopted La Chica Dorada (“The Golden Girl”) to be the singer’s nick name in the Spanish-speaking world. Awarded a three star rating from Allmusic, the album went on to spawn four singles including Mid, Sabor A Miel, Amor De Mujer, and Abriendo Las Puertas Al Amor. Her best selling studio album to date, it has since attained Platinum accreditation in her native Mexico.

The following year, the artist came out with her second studio album entitled, 24 Kilates on November 18, 1993. The follow up to her debut album, its production was once again handled by music producer, Miguel Blasco. Recorded within the span of a year, it featured eleven Latin pop songs including the titles Los Dioses Se Van, Diamante Puro, Nada Puedes Hacer, Asunto De Dos, Corazon Tirano, and Vuelve Junto A Mi.

Although supported by four singles, 24 Kilates ultimately proved to be less commercially successful than her initial album. Given mediocre reviews from contemporary critics, it did not end up reaching any music charts. To date, it has sold over 150,000 copies and has attained Gold certification in Mexico.

Two studio albums later, Rubio received a big break with her fifth title, Paulina (2000). Her first record with Universal Music Latino, it became her first album to receive multi-platinum certification in her native Mexico; to date, it remains to be her best-selling album, having sold over 2,500,000 copies across the world. Produced by Estefano, it consisted of twelve songs including Baby Paulina, Yo No Soy Esa Mujer, Sin Aire, Lo Hare For Ti, and El Ultimo Adios, the last of which was co-written by the artist herself.

Shortly after its release, Paulina entered the Billboard Top 200 at number 156; more impressively, it peaked at number one on both the Latin Pop Albums and the Top Latin Albums Charts. Her breakthrough album, it earned her much well-deserved recognition as a recording artist. Supported by seven singles, many of which proved to be major hits across Latin America, the album has since been certified Platinum in a handful of countries, including the United States. 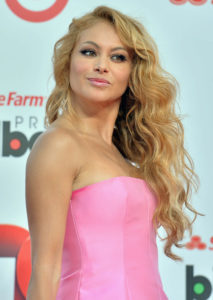 Two years after her success with Paulina, Rubio broke into the English-Speaking world with her first English album, Border Girl (2002). Featuring a blend of various Latin pop sounds, the Universal Records album was produced by Sal Guastella, Bruce Carbone, and Doug Morris. Recorded between 2001 and 2002, the singer worked with a number of songwriters for the project including Desmond Child, Troy Verges, Jodi Marr, Richard Marx, Christian De Walden, among many others. Approximately an hour in length, Border Girl came with sixteen titles including Undeniable, I’ll Be Right Here (Sexual Lover), The Last Goodbye, I Was Made For Lovin’ You, and Fire (Sexy Dance).

In terms of chart performance, the album peaked respectively at number eleven on the US Billboard Top 200. Outside of the country, it also charted in Italy, Japan, Spain, Switzerland, and of course- her native Mexico. Rubio’s highest charting album in the United States, Border Girl received primarily positive reviews from critics, many of whom lauded it for its spectacular combination of musical styles. As of July 2002, the album has sold over 500,000 copies in the US- earning it Gold certification from the RIAA.

Carrying on with her music career, the Latin artist later released her seventh full length album, Pau-Latina on February 10, 2004. Rubio’s return to the Spanish-speaking world following her English debut, she collaborated with a number of producers and songwriters for the project including Marco Antonio Solis, Chris Rodriguez, Jorge Villamizar, Emilio Estefan, and Coti, among others. Recorded in 2003, it came with fifteen tracks including Amor Secreto, Alma En Libertad, Also Tienes, Dame Tu Amor, Mia, Dame Otro Tequila, and Adiosita Corazon.

A huge success in Latin America, it proved to be a chart topper in her native Mexico, as well as in Paraguay, Chile, Columbia, Venezuela and Argentina. In the United States, Pau-Latina also peaked at number one on both the Billboard Latin Pop and Top Latin Albums Charts. Accompanied by four singles, Also Tienes, Dame Otro Tequila, Te Quise Tanto, and Mia, it has since been certified Platinum in Mexico.

Following a two-year-long break, Rubio returned with the album, Ananda on September 16, 2006. Produced by Cachorro Lopez and Aureo Baqueiro, it was made available in stores two days prior to its release in Mexico in attempts to avoid piracy. Another collaboration between a number of talented songwriters, it marked the artist’s third time in being involved with the songwriting aspect. Song-wise, it contained thirteen titles including Mienteme Uni Vez Was, Hoy, Lo Que Pensamos, No Te Cambio, and Sin Final.

Met with glowing reviews, Ananda was given a Tarabu de Oro Award in Mexico for exceeding over 250,000 downloads in the country. Not only that, but it has since sold more than 500,000 copies across the world. Like its predecessor, it also took the number one spots on the Top Latin and Latin Pop Albums Charts.

Since then, Rubio has released two additional studio albums, Gran City Pop in the summer of 2009, and Brava! in the fall of 2011. In terms of other music releases, she has also come out with two new extended plays in 2012, Brava! Reload and Bravisma!.

There’s so exciting news for fans- according to reports, the Mexican artist will be collaborating with popular American singer, Selena Gomez in her upcoming studio album- which is scheduled to be released sometime this year. Although it’s still in the works, the girls have revealed that the track will be “dance-able”- which will definitely make it a big hit. Aside from that, it’s also been revealed that Rubio’s new album will also be featuring DJ Snake. Are you excited as we are? Stay tuned for more details!

If you’d like to stay in touch with the Mexican pop singer, you can do so by following her on social media- you can find Paulina Rubio on Twitter or Instagram at @paurubio. Alternatively, you can also visit her official Facebook page at @paulinarubio.