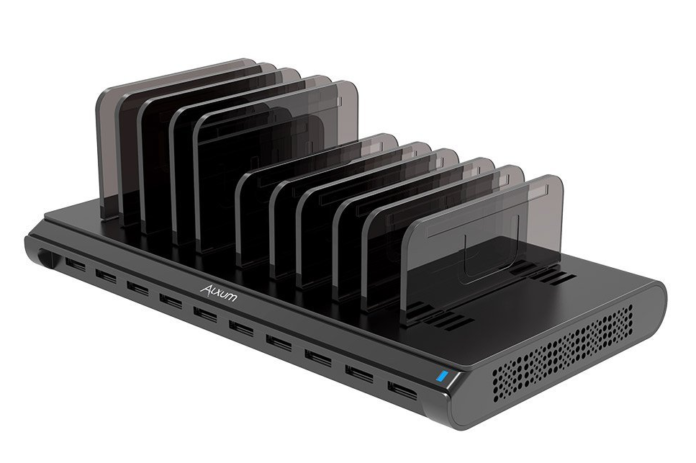 If you are a member of a large family or if you work in a large office building or if you live in a college dorm room, then I’m sure that you’re aware of the difficulty of keeping your smart devices charged. You’ll plug your iPhone into the wall at night, and when you wake up the next morning you’ll realize that someone unplugged it before it had finished charging. Now you have to get to work or to school with an iPhone whose battery level is at 40%. It’s a common issue among a lot of people, and you may be seeking a solution. The nature of iPhone and iPad chargers makes it to where you can’t really charge a lot of them at the same time without fighting over power outlets. Luckily, there are products out there that are meant specifically to solve this problem.

Alxum’s 10 Port USB Charging Station is designed with efficiency and convenience in mind. Basically, it’s something that you plug into an outlet, and from there you can charge up to 10 USB enabled devices at once. It’s sort of like a power strip, except it’s aimed specifically at people who need to charge devices. This may seem like an incredibly effective solution to someone with the aforementioned problem, right? In this article, I’ll be reviewing this product. I’ll talk about a few specific technical details, and then I’ll provide my own opinion as to whether this product is functional and worth your money. Without further ado, let’s see if we can’t learn a little bit more about this charging station from Alxum. 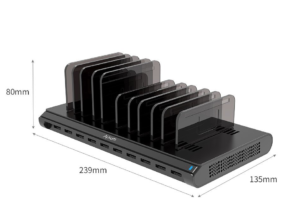 Price: 89.99 (currently on sale, see below for discounts)

First things first the device is currently on sale for a pretty substantial discount of $64.99 at Amazon.com. Now that that’s out of the way one of the biggest concerns that I can imagine someone having with a product like this is the same kind of concern that they would probably have with any sort of power strip. Is it really safe to charge so many things at once, from a single power source? You may be worried that it will overheat, or (worst case scenario) it will short out and leave you with a handful of some very expensive broken devices. I can certainly understand the anxiety, and it seems like Alxum does, too. This device was built with high quality materials, and it was designed to ensure the utmost safety for your devices. This charging station features Alxum’s multi-protect safety system, which makes sure that all of your devices are as safe as they can possibly be. The Department of Energy has issued with device a level 6 for energy efficiency, which is not a metric to scoff at.

Alxum’s 10 Port USB Charging Station goes so far as to protect you from your own bad habits, too. One thing that you may do too often is leave your device plugged into the charger when it is at full battery. Not only is this inefficient, but it can also be a safety hazard. Your device may overheat due to being connected to a power source for such a long period of time, and if you’re charging multiple devices at once while something like that happens, you may be in for some trouble. This charging station utilizes auto detect technology, where charging will stop as soon as the station detects that the device has reached full battery. This is just one of quite a few features that Alxum packed into this charging station to make for a product that is both safe and effective. 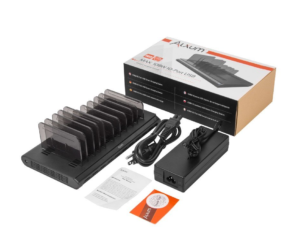 It’s easy for a company to say that their technology does all of this amazing stuff, but it’s a whole other thing for them to actually produce technology that does all of this amazing stuff. How well does this device actually work, in practice? As it turns out, pretty well. One of the most common compliments that this device receives is that it looks surprisingly good. There’s nothing especially fancy or ornate about the aesthetics of this product, but it’s not too gaudy, either. Too often, tech companies don’t have a lot of self-restraint when it comes to aesthetics. You don’t have to worry about bright colors or weird shapes or logos with Alxum’s 10 Port USB Charging Station. Its simple black design makes it to where it should fit in in just about any setting, from the most casual to the most formal settings.

If you’re not quite as superficial, you may be more interested to hear about the performance of this product. In the end, it does basically what you would expect it to do. It charges everything in a timely manner, and it does so in a safe way. If you are someone who is thinking about buying this product, then you should know that this isn’t something that’s meant to charge your devices faster than they would charge normally. You should expect charging speed to be roughly equivalent with what you would get from a traditional set-up. The emphasis with this Alxum device is on quantity. It’s about charging as many things as possible. So I certainly hope that you aren’t going to come into this and expecting the charging station to be any more powerful than your standard outlet charger.

Is the Alxum 10 Port USB Charging Station really worth it? 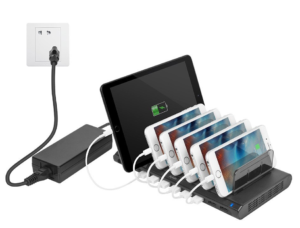 With that said, let’s consider whether or not the Alxum 10 Port USB Charging Station is worth your time and money. First, let’s consider the fact that there are actually two models of this charging station. The black model is the 108 W model & the white model is the 96 W model.

You can usually get both items at a discounted price though by clicking here. What’s the difference between the two? As you can probably infer, the black model has a little bit more capacity, which is to say that it’s just a little bit more powerful. If you’re someone who owns a ton of devices, then the black model is right for you. If you only own a moderate amount of devices that are needing to be charged, then the white model is probably best, especially if you’re on a budget. I like that Alxum offers these two options. Offering two separate price points for your product makes the overall product a lot more accessible, in the end.

It may seem unreasonable to spend this kind of money on something as simple as a charger, but I personally think of this as more than a charger. It certainly has quite a few additional uses. This station is useful for personal use, but it’s also worth investigating if you’re someone who works in groups a lot. If you plan on going to some kind of conference or convention, then bringing something like this along could make you very popular among your friends or co-workers. It could also prove very useful if you’re someone who travels a lot, since outlets can be sparse in airports. The Alxum 10 Port USB Charging Station is unique, because it’s both utilitarian and a little bit frivolous. Sure, you could just carry around a million different chargers and plug them into separate outlets, but it would be a lot easier to use this instead. Overall, I highly recommend this device to someone who has a need for it. It’s just that simple.