In 2003 firefighters Jimmy and Brian McGowan inherited the Firewater Inn in Queens from their father Jack. Later on the pair brought in their brother John, a retired firefighter and a bar owner, as an investor to help with the expenses of the bar’s renovation.

Jack’s Ale House sat unopened for 18 months as the overhaul took place and it took so long that, by the time they reopened, trendier haunts have established firm roots around the area. Now the brothers were buried in debt as patrons didn’t even bat an eye towards their establishment and the financial woes strained their brotherly bonds.

With $400 grand in debt and a brotherhood about to go up in flames, the McGowans have decided to call for a rescue.

Jack’s Ale House had a bland exterior devoid of any decoration, signage, or anything that could draw customer reaction. Things were equally dull inside the bar with the palette limited only to beige and grey, and the walls were adorned with a few American flags. An outdoor patio behind the bar wasn’t being used, a waste of extra space that could accommodate a lot of patrons and bring in extra revenue.

The three hotheaded brothers didn’t see eye to eye and their profane shouting matches took place even when there were customers around. Jimmy had the bad habit of drinking with patrons and opposing the ideas of his other brothers, a total opposite of the hard-working Brian. John failed to inspire his brothers with his experience in running a successful bar and instead stood around the place with a defeatist attitude and was resigned to selling the Ale House so he could get his investment back.

The bartenders lacked knowledge of making some of America’s most famous cocktails and the quesadilla they served was microwaved. They also lacked the initiative to approach customers and ask for the order.

During the stress test Jon Taffer assigned John in the kitchen, Jimmy in the bar area, and Brian on the floor. Jimmy clashed with his wife / bartender Christine and the man chugged down booze while on duty. John and Brian were forced to boot Jimmy out of the bar as he was going overboard with his anger. The lack of a proper system had food orders going cold before it could be served on the right table.

Expert bartender Russell Davis taught the bartenders the Harvey Wallbanger to fill the gap on their repertoire. To rouse customer reaction he introduced The Fireload and Family Rekindle, both of which relied on using fire to create a smoky flavor.

Expert chef Vic Vegas reminded the bar’s cook the importance of using two gloves instead of one when preparing meals and how to make quesadillas on a grill instead of a microwave so the cheese properly melted. Another new menu item was the jacked up grilled cheese challenge, a sandwich that got progressively spicier thanks to the inclusion of ghost pepper. The said pepper charted around 800,000 to 1,000,000 at the Scoville Heat Scale, half the rank of pepper spray’s 2,000,000. The brave souls that manage to finish the infernal dish without drinking the accompanying glass of milk get a shirt.

Taffer sat with the three brothers and their mother, and during this meeting Jimmy revealed that he was under immense pressure both inside and outside the workplace hence his abrasive attitude. The tearful reunion with their mother served as an eye-opener especially for Jimmy, and the brothers now embraced each other and vowed to work as a cohesive unit.

The renovation burned down Jack’s Ale House and from the ashes rose Jack’s Fire Department, a testament to the firemen brothers and a legacy to their father. The exterior was now splashed in red and maroon and had minor details that had a major impact on customer reaction.

Red was the dominant color inside the new bar with firefighting related décor on the walls like extinguishers, axes, and parts of an actual fire truck, and the signage of Firewater Inn was hung as tribute to Jack’s empire. The patio was restored with an LED bar and a portable POS and draft beer system.

Maximum customer reaction extended in the comfort room with the male urinal outfitted with a “Whip Out Your Hose” video game to keep the men entertained while relieving themselves.

Jack’s Fire Department is still open and they’re still fiery hot. They expanded their menu with additional food and drink items. Some of the new expansions include a new DJ table, live sports shows on flat screen television sets, and music festivals. 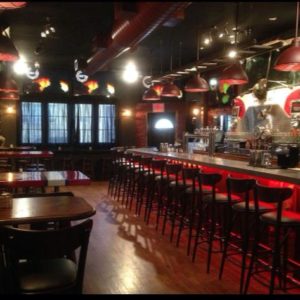 On December 2015 Bar Rescue returned to Jack’s Fire Department to check things out. The brothers were visited by the Tubridys, the same spies during recon night and the owners of Bungalow Bar which was one of the greatest rescues by Taffer. The brothers kept the Bar Rescue changes and they appear to be happy with Taffer’s work. Jimmy still wrestled with his anger issues due to stress but, unlike before, he was able to calm down much faster.
The bar has a huge amount of positive reviews on Facebook and the ones made in 2017 praised the service and atmosphere. The reviews on Yelp were only up to 2016 and were also mostly positive. What little criticism they had were towards the music and the “intimidating” crowd.