What Happened to Undateable – New Season in Pipeline?

Undateable is an NBC sitcom that boasts a cast that includes the likes of Brent Morin, Chris D’Elia, and Ron Funches. The show follows Danny Burton (Chris D’Elia), a guy who gets into all different kinds of trouble with his friends, who are all considered “undateable” in some way. It is a show that has a strong fan base, but die-hard fans of this series may have noticed that Undateable hasn’t had any new episodes in quite some time. Is Undateable cancelled? If so, then why was Undateable cancelled? Will it ever come back? In this article, I’m going to be answering all of those questions and more. I’ll talk about how this show was able to become so popular during its run, while also answering those vital questions about its current status. Without further ado, let’s learn more about this barrel of laughs.

Undateable is based off of the novel. This humor novel sold very well upon its publication, and it also received some pretty positive critical reception. It marketed well to both men and women. Women were amused by the contents of the novel, and men were both amused and informed. The book itself was pretty creative and colorful, and so it didn’t take long for someone to think that it could serve as a strong jumping off point for some kind of television series. NBC purchased a pilot script in late 2012, and by early 2013, they were working on casting the show. Brent Morin and Rick Glassman were the first two people to be cast, and Bianca Kajlich and Chris D’Elia were cast soon after. Aly Michalka was set to have a role in the show, but she ended up dropping out at the last second. 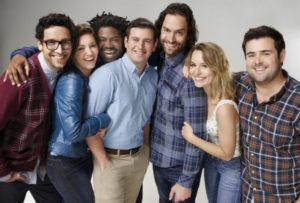 With a complete cast out of the way, Undateable had an entire series ordered by NBC. Around this time, there was a little bit of casting drama involving the role of Brett, who was set to be Justin Kearney’s gay friend. Brett was originally meant to be played by Matthew Wilkas. However, once NBC ordered a series from the Undateable crew, Wilkas dropped out for undisclosed reasons and was replaced by David Fynn. Once that was all settled, however, the cast and crew behind this upcoming show were able to get to work. They began filming, and they braced themselves for the critical reaction to their show, which was set to premiere in May of 2014.

If you’re familiar with television scheduling, then you may know that Undateable was actually released as a mid-season replacement. A mid-season replacement is basically a show that is rolled out whenever another show is cancelled or placed on an unexpected hiatus. Think of it as like a substitute teacher, but for television. A lot of mid-season replacement programs have gone on to become major hits, like Don’t Trust the B—- in Apartment 23, Buffy the Vampire Slayer, Private Practice, and The Office. Leading up to their season premiere in May, Undateable was seriously hoping that they would be able to join that pantheon of successful television shows. The pilot episode had a strong start, bringing in 3.8 million viewers. The first season aired through July, and it consisted of thirteen total episodes. It reached peak viewership during that pilot episode, at 3.84 million viewers. This was not a particularly strong showing, but it wasn’t a bad one, either. 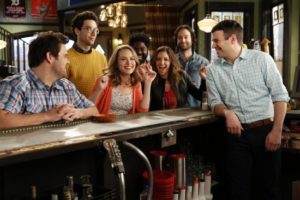 NBC must have liked what they saw in Undateable, because it continued to air through its second season, which premiered in March of 2015 to a much larger viewership with 6.4 million. The second season of Undateable made a couple of creative changes that could have contributed to this renewed interest. One of the most notable differences is that they cast Bridgit Mendler in a main role as Candace. Mendler had already developed quite the following due to her work on the Disney Channel sitcom Good Luck Charlie, and due to a few other movies that she made with Disney Channel, like Lemonade Mouth. This premiere was the strongest viewership that Undateable would have through season two. They never dropped below four million viewers during this season, which was a very good indicator of their increasing popularity.

Due to this increasing popularity, Undateable was brought back for yet another season beginning in October of 2015. One of the main additions to the cast during season three came in the form of Whitney Cummings, who played Charlotte. This season had a very disappointing premiere, with only 2.5 million people tuning in to watch. However, there was a positive to this situation. This was actually the lowest ratings that Undateable held throughout its third season. It’s worth noting, however, that the ratings of this season probably received a substantial boost from the addition of musical guests. Over the course of season three, Undateable welcomed the likes of Meghan Trainor, Saint Motel, Charlie Puth, Weezer, and even the Backstreet Boys. Their third season sort of forced them to rely on gimmicks, and due to its lower viewership compared to the second season, the show was ultimately cancelled. “The Backstreet Boys Walk Into a Bar” would be the series finale, airing in January of 2016.

Fans of Undateable may be devastated to find out that the show has ended, but I don’t think that anyone can really deny that the cancellation had strong cause. The second season performed really well, but the third season was unable to maintain the momentum. On a network like NBC, it’s really important that you remain competitive in the ratings if you want to stay on the air. Undateable wasn’t able to do that, and unfortunately they paid the ultimate price. There has been no indication that the television series will return at any point. It may be hard to come to terms with, but at least you can rest assured in knowing that all of these characters received a proper send-off. The Undateable cast and crew received three seasons, which is more than a lot of people can ask for.