What Happened to Cindy Morgan – 2018 Update 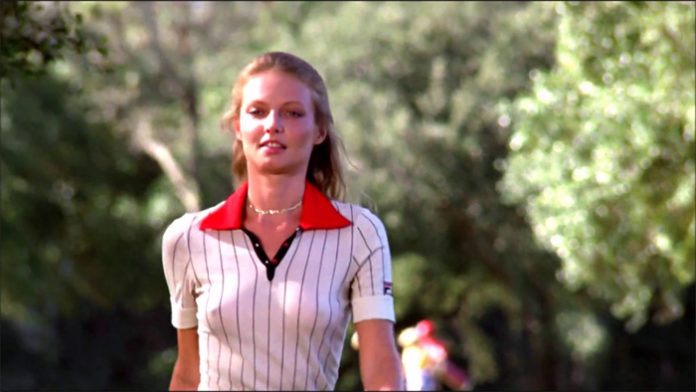 American actress Cindy Morgan first gained widespread recognition for her portrayal of Lora in the science fiction film, Tron (1982). Born and raised in Chicago, Illinois, she spun records on the radio while attending college during the early 70’s. Around that same time, she also adopted her current stage name, from a story that she read when she was twelve years old. Following her graduation, she began working at a local television station, all while continuing to keep her hand at the radio. Eventually quitting during a labor dispute, she worked at various auto shows before relocating to Los Angeles, California, in 1978. From there, she gradually began appearing in TV commercials; it wasn’t long until she started to focus her attention on acting. At the age of twenty five, she made her big screen debut in the comedy flick, Up Yours (1979). The next year, the aspiring actress received a big break when she was cast as Lacey Underall in the sports comedy film, Caddyshack (1980).

Despite having only played a supporting role in the movie, it garnered Morgan, who was still a relatively unknown actress prior, much widespread attention. In 1981, she appeared in her first television series in an episode of The Love Boat; she later went on to make an appearance in the mystery drama, Vega$ (1981). Not long afterward, the blonde received her first recurring role on TV when she was cast in the crime drama, CHiPs (1981). Determined to reach stardom, Morgan continued to attend auditions and eventually landed a breakthrough role in the Academy Award-winning science fiction movie, Tron in 1982. To date, it remains to be one of her most well remembered roles on film. Soon afterward, the actress was cast as a series regular in the CBS drama, Bring ‘Em Back Alive (1982); it marked her first time playing a lead role on television.

That same year, she also played a major role in the romance drama, Falcon Crest (1982), in which she appeared in sixteen episodes. Continuing to work on television, she made a number of guest appearances on TV over the next couple of years in Masquerade (1984), The Fall Guy (1986), Tough Cookies (1986), Crazy Like a Fox (1986), and Amazing Stories (1986). Prior to the end of the decade, Morgan also took part in The Highwayman (1988), She’s the Sheriff (1988), and Matlock (1988). It wasn’t until 1995 that the blonde returned to cinema in the action thriller, Galaxis. Throughout her professional career, she has appeared in well over thirty different roles on both the small and big screen.

So what has the actress from Chicago, Illinois, been up to since then? Has she picked up any new roles as an actress? Can we expect to see her in any new projects this upcoming year? What happened to Cindy Morgan? Where is she now in 2018? 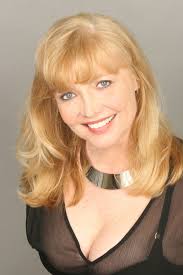 Born on September 29, 1954 in Chicago, Illinois, Cindy Morgan (Birth Name: Cynthia Ann Cichorski) is the daughter to a German mother and a Polish father. Growing up, she went to a local Catholic school called yjr Mother Theodore Guerin High School for Girls as a teen. Following her graduation, she attended the Northern Illinois University where she studied communication. To help support herself financially, she spun records on the radio on the side. Shortly afterward, she was approached by a commercial station that was interested in having her report news for them; not wanting to use her real name, she adopted the moniker “Cindy Morgan” from a story that she read when she was twelve years old. Following her college graduation, she began working at a local television station in the city of Rockford- as she did, she also continued to play records on the radio.

Eventually returning to her birth city of Chicago, she worked as a DJ on WSDM FM for a brief period, prior to quitting while on air during a labor dispute. Turning her attention elsewhere, Morgan eventually began working at various Fiat auto shows, with took her to various cities across the country. In 1978, the blonde who was now in her mid 20’s, started takign on television gigs, appearing in a number of commercials and advertisements including one for Irish Spring Soap. After studying acting for a period, she later decided to try her hand at becoming an actress. 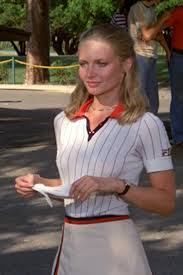 At the age of twenty five, Morgan made her official acting debut in an episode of the comedy series, Up Yours (1979). Just a year later, she received a big break when she was cast as a supporting character in the sport comedy film, Caddyshack (1980)– a movie that many have accredited to launching her career.

Directed by Harold Ramis, Caddyshack centered around a brash, obnoxious golfer and a destructive gopher at an exclusive golf course called Bushwood Country Club. The film’s main cast consisted of Michael O’Keefe, Rodney Dangerfield, Chevy Chase, Bill Murray, and Ted Night. Portraying a supporting character, Morgan played as Lacey Underall- a young woman who eventually becomes the love interest of one of the protagonists named Danny Noonan; they two are later discovered to be having a tryst at the latter’s house in the movie. In addition to the previously mentioned actors, the cast list also included Sarah Holcomb, Scott Colomby, Dan Resin, Albert Salmi, and Henry Wilcoxon.

Filmed in Florida, Caddyshack was released in theaters on July 25, 1980. A mild box office success, it grossed over $3.1 million during its opening weekend across 656 screens. By the end of its run on the screens, it had earned a total of $39.8 million in North America- over six times that of its production budget of just $6 million. Warmly received by contemporary critics, the movie received numerous praises for its superb dialogue and brilliant characters. Later recognized by the American Film Institute for being one of the “100 Funniest American Films”, Caddyshack has since gained a massive cult following. The film’s success would later spawn a sequel called, Caddyshack II, although it was ultimately poorly received upon its release in 1988; Morgan also did not appear in the second installment. 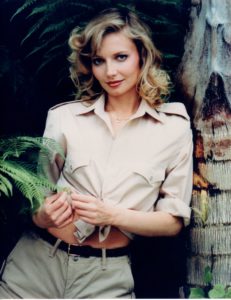 Eventually branching out to television, Morgan received her first major role in the CBS adventure series, Bring ‘Em Back Alive (1982). Created by Frank Cardea and George Schenck, it like many shows before it, tried to capture the success of Steven Speilberg’s adventure film, Raiders of the Lost Arc. Based on a novel of the same name by Frank Buck, a well known game trapper, it centered around a hunter named Frank Buck who fights against various enemies in pre-war Malaya, while working at a local hotel bar. While actor Bruce Boxleitner portrayed the big game trapper, Morgan played as Gloria Marlowe – the United States Consul in Singapore. Other cast members include Sean McClory, Ron O’Neal and Clyde Kusatsu.

A Columbia Pictures Production, Bring ‘Em Back Alive originally premiered on CBS on September 24, 1982. Met with rave reviews, the show proved to be a hit for many fans of Indiana Jones, as the series was similar in style. Despite this however, it was later cancelled after only seventeen episodes due to low viewership ratings- which may have something to do with the act that it was broadcast-ed at the same time as NBC’s The A-Team, and ABC’s Happy Days.

Around that same time, Morgan was also cast as one of the lead protagonists in the sci-fi flick, Tron (1982). Based on a story by Bonnie MacBird and Steven Lisberger, the Walt Disney film centered around a computer programmer at ENCOM who must find a way to escape from inside his computer, after being transported into its software world. Other main characters include Alan Bradley, Flynn’s work partner, Dr. Walter Gibbs, the co-founder of ENCOM and Ed Dillinger, a senior executive of ENCOM. Taking on one of the only female roles, Morgan played as Dr. Lora Baines, Bradley’s girlfriend who also works as an assistant to Dr. Gibbs.

Released on July 9, 1982, Tron proved to be a hit among theater-goers. Upon screening in over 1000 locations, it earned over $4 million during its opening weekend; it eventually went on to gross over $33 million across North America against a budget of $17 million. Although Disney saw it as a financial disappointment, Tron garnered countless praise from critics for its groundbreaking acting and visuals. Gradually developing into a cult film over time, it went on to earn a number of accolades including two Academy Award nominations. For being one of the first movies to use computer-generated animation, it also won a Guinness World Record later that same year.

After playing various small roles over the next few years, Morgan received another break in 1987 when she was cast as a supporting character in the CBS soap opera, Falcon Crest. Created by Earl Hamner, Jr., it depicted the conflict within the powerful and affluent Gioberti family, who owns a winery called Falcon Crest. Originally premiered on TV in 1981, Morgan first made her appearance as Gabrielle Short in the eleventh episode of the soap; from there however, it wasn’t until 1987 that she returned to show during its seventh season. Altogether, she appeared in a total of sixteen episodes.

While the blonde only played one of its many supporting roles, the soap opera’s main cast consisted of Susan Sullivan, Robert Foxworth, Jane Wyman, David Selby, and Abby Dalton, among others. Popular among viewers, Falcon Crest consistently achieved high ratings on television during its run; at the peak of its popularity during its third season, it garnered over eighteen million audience members. A long-running series, well over 200 episodes had aired by the time it came to an end on May 17, 1990.

Over the past few years, the actress hasn’t been all too active within the industry- while she did voice a character in the film short, Face of the Father in 2016, her last major film appearance- or any appearance for that matter- was over a decade ago in the comedy, Open Mic’rs (2006).

Last year, there were some rumors about her starring in an upcoming action film called, The Seventh Year (2016), but that never seemed to have materialized into anything solid. According to the IMDb page for the movie, the cast list would have also included Omar Gooding, Michael Joiner, and Kane Hodder. Considering the fact that its official site has since been shut down, it’s probably fair to assume that the project never made it out- which is a shame, really!

If you’d like to stay up to date with the 62-year-old actress, you can do so by following her on social media- you can find Cindy Morgan on Twitter at @CindyMorgan_.