What Happened to Hugh Hefner – 2018 Update 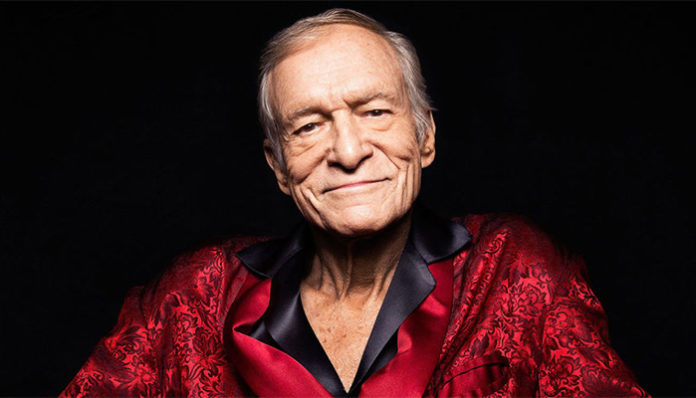 A self-made millionaire, Hugh Hefner is best known for being the founder of Playboy Enterprises, a men’s lifestyle magazine. Born in Chicago, Illinois, he showed an early interest in journalism as a teen, having founded the school newspaper during his time as a student. Following his college graduation, Hefner started to work as a copywriter for Esquire in his early 30’s; however he eventually left the company after being declined an increase in wage. Determined to start his own publication, he successfully raised thousands of dollars with the help of his mother and brother and launched the Playboy in December of 1953. Although he was initially unsure about whether or not it would be a success, the magazine was ultimately an instant hit; inf act, the first issue quickly sold over 50,000 copies, much to Hefner’s surprise. Wanting to distinguish himself from others, he soon developed the Playboy logo, which featured the image of a rabbit- chosen for its “humorous sexual connotation”.

By the mid 60’s, Hefner- known for donning a smoking jacket with a pipe in hand, had become the persona of Playboy itself. During this period, known as Playboy’s golden age, the the company’s booming popularity allowed him to build a vast number of private clubs across the country- ones that featured hostesses aka “Playboy Bunnies” wearing elaborate rabbit costumes. As his wealth continued to grow, so did his business ventures; not only did his enterprise encompass private clubs, but soon it also included hotel resorts, and modelling agencies- all of which were considered high-end establishments. By 1972, Hefner’s company was earning approximately $12 million in profit. Despite this however, Playboy Enterprises soon began to decline in the mid 70’s, as a result of the US recession and increased competition from various other men’s magazines. Determined to bring it back up, Hefner subsequently focused his attention on the subject of magazine publishing within his company.

Throughout the decades, several well-known female celebrities have graced the covers of Playboy Magazine including Naomi Campbell, Kate Moss, Pamela Anderson, Madonna, and Cindy Crawford, to name a few. Over the years, Hefner has also helped to produce sundry television programmings such as Playboy: 50 Years of Playmates (2004), Playboy: No Boys Allowed 100% Girls 3 (2005), Playboy: Women of Fear Factor (2005), The Woman with the Hungry Eyes (2006), and The Girls in the Band (2011). Speaking of TV, the Playboy founder has also made several guest appearances in a variety of series including Sex and the City (2000), Las Vegas (2003), Curb Your Enthusiasm (2005), Family Guy (2007), Shark (2008), and Miss March (2009).

What has the successful businessman been up to recently? Is he enjoying the retirement lifestyle now that he is ninety years of age? Or is he still actively involved with the corporation as the founder of Playboy? Can we expect to see any new projects from him this year? What happened to Hugh Hefner? Where is he now in 2018? 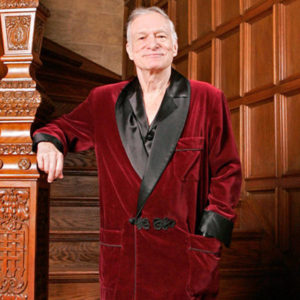 Born on April 9, 1926 in Chicago, Illinois, Hugh Marston Hefner is the son of Grace Caroline Swanson and Glenn Lucius Hefner; he is of Swedish, English, and German descent. As a teen, he went to Steinmetz High School; although his academic performance in class was modest, he reportedly had a tested IQ of 152. Involved in extracurricular activities, he not only served as the student council president, but was also founder of the school paper- it was around this time that his talent in journalism became apparent to those around him. Known for his creative imagination, Hefner also created a comic book which he called School Daze during his youth.

Following his high school graduation, Hefner joined the US Army and served for two years before being honorably discharged in 1946. From there, he attended the Chicago Art Institute briefly prior to studying at the University of Illinois at Urbana Champaign, where he eventually attained a Bachelor’s of arts in psychology with a double minor in art and creative writing at the age of twenty three. Shortly afterward, he took a number of graduate classes at Northwestern University however ultimately dropped out. Eventually landing a copy-writing gig at Esquire, Hefner worked there for several years prior to leaving the company in 1952 after being denied an increase in wage. Falling back on his journalistic talents, he then decided to start his own publication. With his goal set, Hefner soon found himself trying to fund raise the amount needed to launch the company. With a little help from 45 investors, including his brother and mother, he was successfully able to raise $8000, which he subsequently used to kick start what would later become known as the Playboy Magazine.

The Beginning of Playboy Enterprises 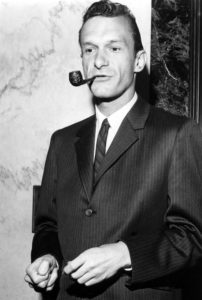 Initially unsure of whether or not there would be a second issue, Hefner decided not to include a date on the first edition of Playboy, which was made available December of 1953. To help boost its popularity however, the businessman bought a colored photograph of Marilyn Monroe to include as the magazine’s centerfold. Upon hitting the stands, Playboy Magazine proved to be a major hit- especially among those trying to escape from the economic depression present at the time. According to statistics, the first issue sold roughly 50,000 copies.

Wanting to develop a voice for his company, Hefner eventually chose the image of a rabbit as the Playboy Logo, as the animal was often noted for its “humorous sexual connotation”. Determined to distinguish his own publication from others, he decided to cater toward intellectual males (most magazines at the time catered toward outdoors-men), and feature sexual image in the magazine. As it grew in popularity, so did its sales; by the late 1950’s, Playboy had surpassed that of Esquire Magazine in terms of sales, having sold approximately 1,000,000 copies a month.

Playboy During the Golden Age

In the 60’s, Hugh Hefner himself became the public face of Playboy. Known for donning a smoking jacket with a pipe in hand, the magazine continued to see increased success over the next few years. As his wealth continued to boom, he eventually decided to build a series of private clubs across the country; these clubs would feature hostesses (“Playboy Bunnies”) wearing scanty bunny outfits. Over the years as the company continued to grow, so did the endeavors of the corporation. Before long, Playboy not only operated private clubs, but they also had modeling agencies as well as hotel resorts.

Challenges Faced by Playboy in the 70’s 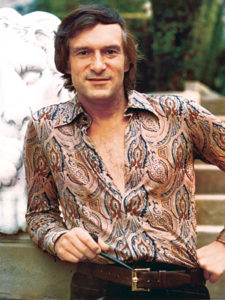 By the next decade, Playboy Enterprises had gone public, with over 7,000,000 copies of the magazine in circulation a month, which translated to over $12 million in profit. Despite the success that it saw however, it soon found itself facing a number of challenges by the 70’s. Not only was the country in recession, but the magazine also started to see increased competition from other similar publications that were popping up such as Penthouse. In response, Hefner presented a greater amount of revealing photos in the magazine; however his plan ultimately backfired. Not only did sales not go up, but advertisers also started to rebel, which caused circulation to drop even greater.

Determined to bring it back up, the company subsequently placed a greater emphasis on its magazine publishing operations. Although Playboy inevitably continued to receive criticism from select individuals, things soon began to recover. Over the years, a number of female stars have graced the covers and insides of Playboy Magazine including Cindy Crawford, KAte Moss, Madonna, Pamela Anderson, and Nancy Sinatra. 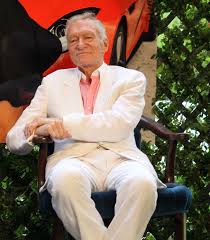 With Playboy, Hefner has produced well over a hundred different videos specials such as Playboy: 50 Year of Playmates (2004), Playboy Video Centerfold (2005), Playboy Playmate of the Year DVD Collection (2006), among numerous others. Aside from his work as a television producer, he himself has also guest appeared in a number of TV series including Burke’s Law (1965), The Odd Couple (1974), Laverne & Shirley (1982), and Curb Your Enthusiasm (2005), to name a few.

Probably most noteworthy of all however, is his involvement in reality TV. In the summer of 2005, Hefner co-created The Girls Next Door– a show that revolved around the lives of his girlfriends at his Los Angeles home, aka The Playboy Mansion. As such, Hefner himself is often featured on screen, along with the girls and various other celebrities. Not only does the series focus on the mansion, but it also highlights various other Playboy events such as Operation Playmate, the Playboy Jazz Festival, and the Playmate Test Shoots, etc.

Originally released on August 7, 2005, on E!, The Girls Next Door quickly proved to be an instant hit for the network. At the peak of its popularity, it was watched by over 2.6 million viewers. Fairly long-running at over ninety episodes, the show’s success eventually spawned four spin-offs including Holly’s World, Kendra on Top, Kendra, and Bridget’s Sexiest Beaches. After a six-season run, the reality series came to an end on August 8, 2010.

In a rare film appearance, Hefner appeared in the 2008 romantic comedy, The House Bunny. Directed by Fred Wolf, it starred actress Anna Faris as Shelley Darlington- a young woman living at Hefner’s Playboy Mansion, who aspires to one day become a Playboy Playmate. Much to her dismay however, she finds a note from the owner of the home himself asking her to leave on her twenty seventh birthday. The movie’s cast also included Anna Faris, Emma Stone, Kat Dennings, Colin Hanks and Rumer Willis.

Released theatrically across the nation on August 22, 2008, The House Bunny debuted at number one on the box office, having grossed close to $6 million during its opening weekend. By the time it came off the screens, it had earned over $70 million worldwide, rendering it a commercial success as it was only produced on a budget of $25 million. Despite the figures that it brought in however, reviews were generally mixed- many of which described it as “a very basic comedy”. To put things into perspective, The House Bunny holds a 42% rating on Rotten Tomatoes and has a score of 5.5/10 on IMDb.

This upcoming April, Hefner will be featured in a documentary biopic series called, American Playboy: The Hugh Hefner Story, a show that will chronicle the life of the wealthy businessman and the brand that he has brought to success over the decades. To be released on April 7, 2017, it is currently scheduled to run for ten episodes.

Speaking of media appearances, the 90-year-old will also be appearing in the film documentary, What Ever Happened to Norma Jeane?. Aside from Hefner, the movie will also be featuring a number of well-known celebrities such as Tony Curtis, Ellen Burstyn, Jerry Lewis, Mickey Rooney, and Theresa Russell. A French production, it will be released in France on June 1, 2017.

Having said that, Hefner hasn’t been seen in public for many months- something that has led many to believe that he is in fact, suffering from declining health.