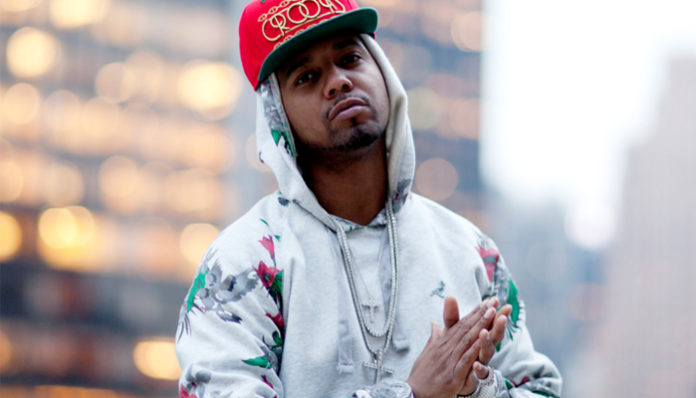 LaRon Louis Jamesーbetter known as Juelz Santana, is an American rapper who is known for being a member of the R&B music group, The Diplomats. Raised in Manhattan, New York, he first started to rap at the tender age of five. By the time he was twelve, he had formed a duo called Draft Pick, which was later signed to the label, Priority Records. At the age of seventeen, Santana’s talents in the genre landed him a position in the hip hop group, The Diplomatsーwhich also consisted of Freekey Zekey, Jim Jones and Cam’ron, all of whom were from the Harlem area. In 2001, the gang secured a recording contract with Def Jam, after which they began working on their debut album. A couple of years later, they dropped their first studio album entitled, Diplomatic Immunity in the spring of 2003. A major success, the disc has since gone Platinum in the United States. After a label switch, they released their second album, Diplomatic Immunity 2 in 2004.

Despite the success that they garnered, the group eventually dissolved in the mid 2000’s after controversy and tensions between members, in particular between Jay-Z and Cam’ron. From there, it wasn’t until 2010 that they announced a possible reunion. During their time together, Santana and the rest of his group mates came out with two full length albums, three compilation albums, eight music videos, eight mix tapes and nine singles. To date, their most successful album remains to be that of their debut, which has since sold over a million copies domestically. Some of the tracks that they’re most notable for include Built This City (Feat. Cam’ron), Dipset Anthem, Crunk Muzik, Have My Money, and Do something. After getting back together in the 2010’s, they’ve gone on to release Dipset Mania: Special Edition (2011), Dipset Mania: Back to Business Vol. 2 (2013), and American Dream (2015); a third studio album is also in works.

In addition to his work with The Diplomats, Santana has also released couple of solo studio albums on his own. After signing with Def Jam as a solo artist in 2002, he came out with his debut album, From Me to U in the summer of 2003ーshortly after the release of the group’s first album, Diplomatic Immunity. Although reactions from critics were generally mixed, it did manage to chart at number eight on the Billboard Top 200. Two years later, the rapper released his second solo album entitled, What’s the Game’s Been Missing!, which proved to be significantly more successful. As a solo music artist, Santana has released two studio albums (so far), twenty two singles, and six mix tapes.

So what has the 34-year-old New Yorker been up to these days? Does he have any music releases planned for this upcoming year? If so, what are they? What happened to Juelz Santana? Where is he now in 2018? 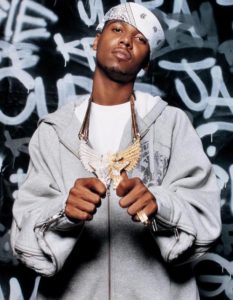 Born on February 18, 1982 in New York City, New York, Julez Santana (Real Name: LaRon Louis James) is the son of a Dominican mother and an African American father. Raised in the Harlem neighbourhood of Manhattan, he took an interest to rapping early in life; by the time he was five years old, he was already performing for family and friends.

Continuing with his hobby and passion, Santana later formed a duo called Draft Pick at the age of twelve, which was eventually signed with Priority Records, although they didn’t end up releasing any albums. At the age of eighteen, the rapper was invited to make a guest appearance in one of Cam’ron’s R&B tracks from his studio album, S.D.E.; he eventually joined the group in 1999.

The Diplomat’s fourth member, the hip hop group also consisted of Freekey Zekey, Jim Jones, and Cam’ronーall of whom had been recording and performing together since 1997. A couple of years after joining the lineup, Santana and his bandmates forged a recording contract with Def Jam and Roc-A Fella Records, the latter of which was owned by fellow member, Jay-Z. From there, they headed off to the studios to promptly work on their debut studio albumーwhich would eventually be released in the spring of 2003. 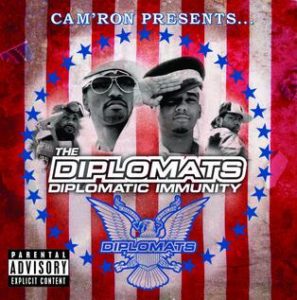 On March 25, 2003, The Diplomats came out with their first studio album entitled, Diplomatic Immunity. The group’s first collaborative effort, its production was handled by a group of well-known musicians including Hiroshima, Just Blaze, Heatmakerz, E Bass, Period, and Kanye West. Well over an hour in length, the albumーreleased under Roc-A-Fella Records and Def Jam Recordingsーcame with two discs, both of which consisted of over ten R&B tracks; the first disc boasted fifteen titles while the second included twelve. Some of the titles from the 27-track-album included Ground Zero, Real Niggas, Dipset Album, This is What I Do, Hell Rell Freestyle, What’s Really Good/Phone Skit 5, and Bout It Bout It Part III; among the album were also Who I Am, and More Than Musicーboth of which were performed entirely by Santana.

Shortly after hitting shelves that spring, Diplomatic Immunity entered the US Billboard Top 200 at number eight; it also eventually peaked at number one on the Top R&B and Hip Hop Albums Chart. A moderate success, it went on to sell over 92,000 copies during the first week. Later certified Gold by the RIAA, it was later hailed as “one of the classic albums of the past decade” by Complex Magazine in 2012. Despite this however, critical reception from contemporary music critics were generally negativeーits subpar production values having been the target of much criticism. To put things into perspective, Allmusic gave Diplomatic Immunity a two star rating while Rap Reviews gave it a score of 4.5/10.

Just a year later, The Diplomats dropped their second full-length album, Diplomatic Immunity 2 on November 23, 2004. The first record with the Diplomat label, it was produced by Antwan Thompson, Develop, Victor Babb, Blackout Muzik, J. Fahre, among others. Considerably shorter in length compared to their debut effort, it consisted of seventeen tracksーall of which fell into the category of hip hop. Some of the titles included in the album include: Get Use to This, Would You Like to Be a Gangsta Too?, Get From Round Me, I Wanna Be Your Lady, and Bigger Picture.

In terms of chart performance, Diplomatic Immunity 2 peaked at number forty six on the Billboard 200ーa considerable drop in rankings from what was achieved by their earlier album. Having said that, it still managed to peak at number eight on the Top R&B and Hip Hop Albums Chart and at number three on the US Independent Albums Chart. Although it sold less copies in the United States, reactions to the album were generally more positive in contrast to its predecessor. Described as being “light years ahead of their debut release”, the album as a whole received a three and a half star rating from critics at Allmusic. Since then, Diplomatic Immunity 2 has sold over 500,000 copies in the US, making it The Diplomat’s second Gold Certified release.

By the latter half of the 2000’s, rumours about there being disagreements and rifts within the band began to spread, especially between members Jim Jones and Cam’ron. Although the group never officially disbanded, it was later hinted at during an on stage concert that the group’s dynamic was in fact, beyond repair. From there, it wasn’t until the spring of 2010 that the feud between the two began to resolve. Eventually later that year, it was announced that they would be reuniting once againーmuch to the excitement of fansーfor a new album, which would be released under Interscope Records. 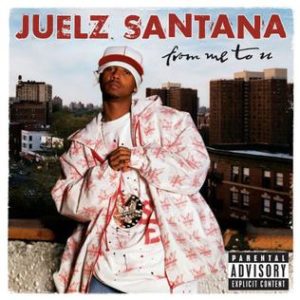 Shortly after the release of the group’s first album, the rapper also made his debut as a solo artist with his first studio album entitled, From Me to U with Def Jam. Consisting mainly of gangsta rap and hip hop beats, its featured production from Jazze Pha, Chad Hamilton, Edward Hinson, The Heatmakerz, and Jim Jones. Approximately seventy minutes in length, it came with twenty tracks including How I Feel, Back Again, One Day I Smile, Okay Okay, Rain Drops, and This is for My Homies. Aside from his solos, the album also featured guest appearances from artists such as Opera Steve, Monique Garnett, J. R. Writer, T.I. and Freekey Zekey.

Released on August 19, 2003, it entered the US Billboard 200 at number eight and sold approximately 74,000 copies within the first week. Not long afterward, the album also snagged the third position on the Top R&B and Hip Hop Albums Chart. From Me to U eventually went on to spawn the single, Dipset (Santana’s Town) which peaked at number seventy on the Hip Hop Songs Chart.

Two years later, Santana released his second solo studio album entitled, What the Game’s Been Missing!, also under the Def Jam label. Recorded between 2004 and 2005, approximately 160 songs were created for the album, although only a fraction ended up making it onto the track list. Produced by Terrence Anderson, Neo Da Matrix, DJ Nasty & LVM, DJ Infamous, among a few others, it included the titles Whatever U Wanna Call It, Lil’ Boy Fresh, Kid is Back, I am Crack, Rumble Young Man Rumble, and Mic Check. Much like his earlier album, it also featured a handful of guest artists such as Sizzla, Hell Rell, Lil Wayne, Razah and Bezel.

Highly successful, especially when compared to his debut album, What the Game’s Been Missing! peaked at the ninth position on the US Billboard Top 200 and sold over 141,000 units during the first week. Supported by four singles, Clockwork, Make it For Ya, There It Go (The Whistle Song), and Mic Check, it garnered mostly favourable reviews. For example, both the Rolling Stone and Vibe Magazine gave it a three and a half star rating; critics at Pitchfork Media also rated it a score of 6.9/10. Later peaking at number one on the top R&B Albums Chart, it has since sold more than 500,000 copies within the country- making it Santana’s first RIAA certified solo album.

There’s good news for fans- Santana has announced that he will be dropping a brand new mixtape called The Get Back this February. According to the R&B star himself, it will contain a total of eleven tracks- three of which have never been released. Having said that, he did not reveal the exact date of its release- we’ll just have to wait for the news!

What else has the rapper been up to as of late? Well for one thing, he has appeared in a handful of episodes in the reality TV series, Love & Hip Hop. If you’d like to tune into the show, you can catch it on television every Monday at 8PM on VH1.

If you’d like to stay up to date with the 34-year-old emcee, you can do so by following him on social media- you can find him on Twitter or Instagram at @thejuelzsantana. Be sure to also check out his official Youtube Channel [email protected] for some of his latest videos!