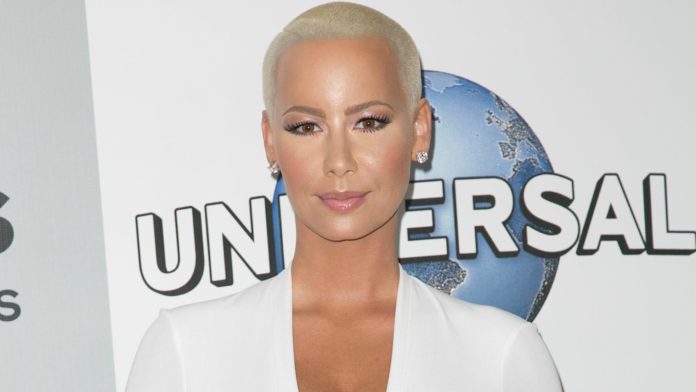 Amber Rose is proof positive that all it takes to be famous and rich is top be in the right place in the right time, and look the part. Don’t get me wrong, she has talent, but all the talent in the world can’t make you rich and famous. It takes that one magic moment, where the stars align and one of them gives you a shot. A few bit roles in TV, a music video or two and bam, stardom. That’s pretty much my take away from looking into the early career of Amber Rose. What she has done with her fame is nothing short of fantastic. She speaks out on causes I agree with, and has been pursuing every avenue for increased exposure, making music, and even appeared on an episode of RuPaul’s Drag Race. Season 3, Raja’s season.

So when looking into how she makes her money there is a lot to take in. With so many pies spinning in the air writing this article is going to be a breeze. So let’;s take a closer look at where Amber Rose came from, what she did to make her money, and what we can expect from her going forward.

How Did Amber Rose Make Her Money & Wealth?

Amber Rose, born Amber Levonchuck, had a rough childhood. Her father leaving the family when she was a teen led to her becoming a stripper while still a minor, 15. Her early career is a mix of bit roles in television and a few appearances in music videos. It was the music videos that led to her big break. She appeared in the video for Ludacris’ What them Girls Like, which piqued the interest of Kanye West. She dated Kanye for a number of years, all the while modelling and appearing in his music videos.

The modeling forms the foundation of her wealth. She has walked for Louis Vuitton, Celestino and Ford. In the early 2012s she began to branch out into other ventures, making music and launch a line of eye wear. Savvy use of social media and reality television allowed her to grow her fame and last year she launched an emoji app called Muvamoji. That might not sound like much, but that app shot to the top of the charts, selling millions. It is estimated that sales of the app generated $4 million in revenue. Not bad when you realize it can be made with a staff of two working for a day and a half. Last year also saw Amber Rose launch a talk show on VH1, whose [programming it must be said has been getting better and better over the last year or so. The Amber Rose Show aired for 9 episodes, until September of last year, with a second season due out later this year.

Now we come to the near universal part of the net worth conversation. The social media angle. I’m sure you know by now that social media can be a powerful tool for generating revenue. The more famous you are3 the bigger your audience, and thus the more lucrative the endorsement deals you get offered. Amber has a popular Twitter account and Instagram account, with millions of followers. It is safe to assume that she is getting well paid for any product she is seen with or mentions.

Amber has several books published under her name, whether or not she wrote them is immaterial, a portion of the sales goes to her. Lastly, Amber Rose divorced Wiz Khalifa, and while I think the majority of her wealth comes from her own ventures, the money she received in the divorce, not to mention any monthly payments that may have resulted, add up.  Overall a fair number of things all adding up to her impressive wealth. It will be interesting to see where she goes from here. Expect more modelling, more TV and maybe more music, though probably not more music.

Does Amber Rose have any children?

Amber rose has one child with Wiz, they have joint custody of their Son.

Where is Amber Rose from?

Amber Rose was born and raised in Philadelphia, Pennsylvania.

Where does Amber Rose live? Pictures of Amber Rose’s house.

Amber Rose is reportedly living in LA at the moment, in a $4 million home. The 7k feet home has six bedrooms, eight bathrooms and a lovely pool in the back. it also has a library and to bars, one inside one outside. Overall the place is lovely, but I have only a vague idea as to where she got the money for it.

What kind of car does Amber Rose drive?

Amber Rose owns several cars, including a Hot Pink Hummer. The more interesting purchase to me was a Rolls Royce to match Blac Chyna’s.

Why did Amber Rose and Wiz Khalifa Break up?

It has been reported that Rose Divorced Wiz Khalifa over his infidelity. I do no know how accurate this is, but apparently she walked in on him having sex with two women, twins Jas and Ness Rose (No relation). Wiz himself has stated that he simply did not want to be married to Amber anymore.