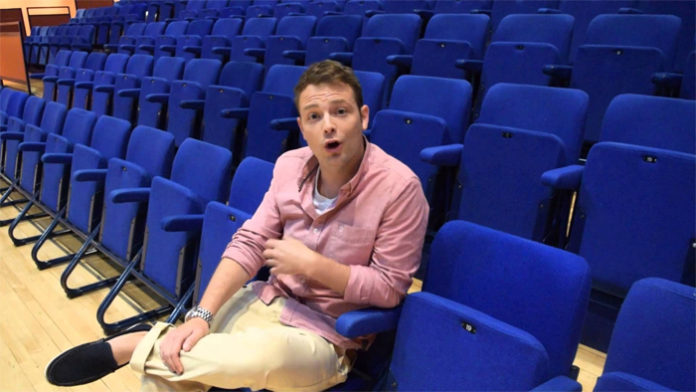 British singer Mark Rhodes first gained widespread attention after finishing second in the second season of the music competition, Pop Idol in 2003. Born in Walsall, England, music had always been something that he enjoyed growing up. A few years after graduating from school, the then twenty-something decided to try his luck on Simon Fuller’s new TV series, Pop Idol. For his first song during the Top 50, Rhodes performed a rendition of Patrick Swayze’s She’s Like The Wind, which quickly captured the hearts of audience members. Continuing to battle it out with the other contestants over the next few weeks, he eventually found himself standing among a handful of finalists during the last round. Some of the classics that he sang on the show include With or Without You by U2, Imagine by John Lennon, Help! by The Beatles, Blue Christmas by Elvis Presley, and Measure of a Man by Clay Aiken. In the end, he finished second behind winner, Michelle McManus.

Although he didn’t take home the winner’s title, his overall experience on Pop Idol eventually led him to score a co-presenter position in the BBC Two music show, Top of the Pops: Reloaded (2004). Based on the original Top of the Pops, it ultimately ran for 28 episodes until the spring of 2006. From there, Rhodes landed another gig as a presenter in the children’s television program, Level Up with Sam Nixon- his partner in crime whom he met during Pop Idol. After its short five-month run, the pair went on to star in their own entertainment show, Sam & Mark’s TMi Friday. Since then, the two have also hosted Sam and Mark’s Guide to Dodging Disaster (2008), Skate Nation (2009), Jump Nation (2010), Copycats (2010), Comic Relief Does Glee Club (2011), and Sam & Mark’s Big Friday Wind-Up (2011). By himself, Rhodes also served as the main presenter in Do Something Different (2007), and Who Wants to be a Superhero? (2009).

In 2012, the singer of Pop Idol fame also participated as a contestant in the ITV game show, Dancing on Ice. Following that, he competed in the children’s panel show, The Dog Ate My Homework, hosted by Iain Stirling. While Rhodes is mostly involved with reality and talk shows, he has also appeared in a couple of acting roles in the TV series, The Slammer (2008), and Class (2009). Outside of television, Rhodes and his buddy have also released two singles under the name, Sam & Mark; the titles With a Little Help from My Friends and The Sun Has Come Your Way both came out in 2004.

So what has the singer-turned-television presenter been up to in the recent years? What new TV programmings have he taken a part of lately? Will we be seeing him in any other acting roles? What has been keeping him busy as of late? What happened to Mark Rhodes from Pop Idol? Where is he now in 2018? 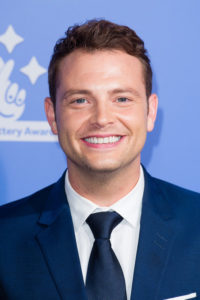 Born on September 11, 1981 in Walsall, England, Mark Thomas Rhodes spent the majority of his early life in the Metropolitan Borough of Walsall. Having always been fond of music, he eventually took up singing as a youth. After graduating from grade school, Rhodes went to the Darlaston Comprehensive High School in the town of Darlaston, from which he later graduated from in 1999.

At the age of twenty one, just a few years after finishing school, Rhodes decided to try his hand out at Pop Idol– Simon Fuller’s new reality competition. Premiered on ITV in 2001, it offered idol hopefuls the opportunity to win a £1 million recording contract. Following the first season which ended in 2002, the second season saw the return of the four judges- Simon Cowell, Nicki Chapman, Pete Waterman, and Neil Fox.

Heading to the auditions with his lucky underpants, Mark Rhodes seemed like the ultimate cheeky chap. However it was later revealed that had in fact, hidden a much more serious side behind his silly jokes and sweet smile. In an exclusive interview held a few months after the start of the competition, he explained that he had vowed to win the competition for his wheelchair-bound nephew, Tom who suffers from spinal muscular atrophy. In fact, while Rhodes was auditioning for the show in Manchester, the thirteen-year-old was going through a 7-hour-long operation to save his life.

Even more tragic, is the fact that Mark’s grandmother Evenlyn had passed away just a few hours after he first impressed the judges on the show. Pledging to win Pop Idol as tribute to the two, Rhodes strove forward into the competition. 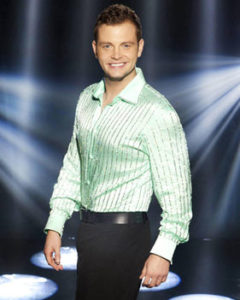 After successfully earning a coveted spot in Pop Idol, Rhodes went on to perform She’s Like the Wind by Patrick Swayze during the Top 50, a performance that earned him 20% of the public’s votes and put him in second place. By the end of the round, a large number of contestants had been eliminated and sent home.

Following the end of the four heats, the competition advanced to the Live Shows. For the first round, each competitor had to perform a song from their own “Pop Idol”. The fifth to perform on stage that week, Rhodes sang With or Without You by U2. While it unfortunately landed him in the bottom three, he was ultimately same from elimination; his peers Kirsty Crawford and Leon McPherson were instead sent packing.

For the second live show which aired on November 1, 2003, each act had to sing a song from their own respective birth year. Born in 1981, Rhodes made the decision to perform John Lennon’s classic hit, Imagine, which rendered him safe from elimination. In the end, Marc Dillon and Brian Ormond were eliminated, leaving only eight competitors left on the show.

The next week, the theme was for everyone to sing an Elton John song. Second last to perform, Rhodes sang a cover of Something About the Way You Look Tonight– a performance that was met with applause. Ultimately, Kim Gee was eliminated after singing The One.

For the fourth live show, all of the remaining contestants were to perform a disco song. After singing More Than a Woman by Bee Gees, Rhodes unfortunately found himself in the bottom three once again. Having said that, he was eventually spared from elimination; instead, Andy Scott Lee was sent home following the round.

From there, the six competitors were each tasked with singing a song by The Beatles. Some of the titles sang by his peers included With a Little Help From My Friends, Ticket to Ride, The Long and Winding Road, Hey Jude, and Let It Be. For this round, Rhodes chose to sang Help!, which resulted in him being in the bottom two. Luckily, he was able to advance to the sixth live show.

For the next two live shows, Rhodes sang Have You Met Miss Jones? by Frank Sinatra for the Big Band challenge and Merry Christmas Everybody by Slade and Blue Christmas by Elvis Presley for the Christmas Songs Challenge. While the latter round him in the bottom two, he was ultimately able to make it into the top three.

For the top three, the contestants had to sing a song chosen by the Judges. Successfully keeping his distance away from the bottom three, Rhodes sang two applause-worthy performances of Back For Good by Take That and If You Don’t Know Me By Now by Simply Red.

After one final advancement, only two individuals were left in the competition- Rhodes and his fellow competitor, Michelle McManus. For his individual song, he chose to sing She’s Like the Wind– the very same title that brought him into the show. From there, he also performed All This Time, and Measure of a Man. Although it was a tight finish, he eventually emerged as the runner-up, having lost to Michelle. 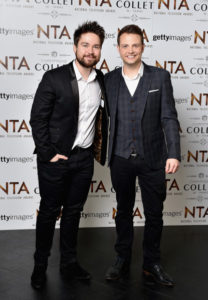 While competing in Pop Idol, Rhodes met Sam Nixon; the two eventually became close friends. After the competition finished, the pair decided to form a music duo together called Sam & Mark. Signing with Simon Fuller’s label, they soon dropped their debut single which was a cover of With a Little Help From My Friends by The Beatles. A relative success, it ended up peaking at number one on the UK Singles Chart.

Not long afterward, the two former Pop Idol contestants released their second single, The Sun Has Come Your Way. Unfortunately, it did not replicate the same level of success as their earlier effort, having only reached number nineteen on the record charts. As a result, Sam & Mark were ultimately dropped from the label.

In spite of this however, the pair have since managed to carve a successful career for themselves on television. More specifically, they have co-hosted a number of TV programs together including the children’s programs Top of the Pops Reloaded and TMi. In 2006, Sam & Mark also served as the main presenters of the breakfast TV show, Level Up for a period of four months.

In 2009, the two started a new TV show called Skate Nation- an eleven-part series that features 14 teams of roller skaters, each of whom competed for a chance to go to the World Games to be held in Taiwan. Following its end, Sam & Mark went on to host a similar show called Jump Nation in 2010.

That same year, they began to host a children’s game show called Copycats. Originally premiered in 2010, it continues to be broadcast-ed to this day. Since then, the pair of TV presenters have also hosted Comic Relief Does Glee Club (2011), Sam & Mark’s Big Friday Wind Up (2011), and Junior Bake Off (2015).

In addition, he has participated in a couple of reality competition series such as Dancing on Ice in 2012 and The Dog Ate My Homework in 2014. Most recently in 2016, he also made an appearance in CBeebies Bedtime Story.

Currently, Rhodes is co-hosting the British baking competition series, Junior Bake Off alongside his partner, Sam Nixon. First premiered on CBBC in the fall of 2011, the show is currently on its fourth season.

Additionally, he has also been hosting the CBBC children’s game show, Copycats since November 2009. After a three-year hiatus, the series returned in January of 2016.

With Sam, he will also be touring the Butlins holiday camps this year- to perform a new game show very similar to that of Copycats and Sam and Mark’s Big Friday Wind Up. According to their site, it kicked off in February of 2017.

On Sunday mornings, Sam & Mark also hosts a radio show that can be listened via Free Radio across Warwickshire and Conventry.

If you’d like to stay atop of his new television projects, the easiest way to do so is probably to visit his official IMDb page as he doesn’t seem to use social media!