What Happened to Michelle McManus – What is She Doing Now in 2018? 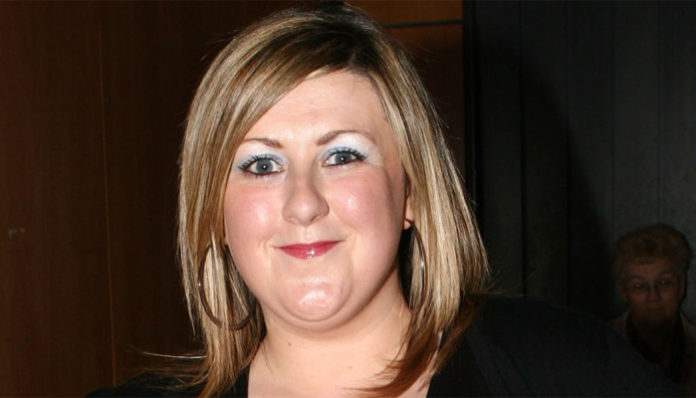 Scottish singer Michelle McManus first garnered international fame after winning the second season of the British talent competition series, Pop Idol in 2003. Hailing from Scotland, she worked and lived in the suburbs of Baillieston prior to participating in the popular TV show at the age of twenty three. A talented singer, her vocal skills quickly garnered her a coveted spot in the music competition series after a successful audition in front of the judges. Although many had initially been critical of her, mainly due to her physical appearance, McManus eventually made herself known as a worthy contender, having earned the respect of the infamous hard-to-please judge, Simon Cowell. After several weeks of competing on stage, the blonde was announced as the grand champion of Pop Idol in the winter of 2003. As the winner, McManus was offered a recording deal with Sony BMG shortly after the end of the series.

Within a year, the Pop Idol winner released her debut album entitled, The Meaning of Love in early 2004. A chart topper in her native Scotland, it easily cemented her place in the industry as an emerging artist. A commercial success in the UK, the title has since been certified gold in the country. Speaking of her musical releases, McManus has also come forth with three music videos, and four singles throughout her career. Some of her most popular songs include All This Time, The Meaning of Love, Just For You, and Take You There, the first of which topped the UK record charts. In 2010, the same title was featured in an episode of Angela and Friends. While she hasn’t released any new material since, her talents are far from forgotten; in fact, her initial fame from Pop Idol has since led her to branch out to another area- television.

Following her win on the UK talent show, McManus was invited onto several talk shows including CD: UK (2004), GMTV (2004), This Morning (2004), Top of the Pops Saturday (2004), Smile (2004), and Today with Des and Mel (2004), to name a few. In 2009, the blonde started to appear in The Hour as a guest hostess; from there, she was eventually promoted to a permanent co-host later that fall. The following year, McManus also served as the co-host of STV’s main Hogmanay TV programme, The Midnight Hour (2010). As for ongoing projects, the singer has also been acting as a presenter in the Scottish charity TV series, STV Children’s Appeal since 2011; her 2012 hit, Take You There was released as the official single for the show.

What has the pop singer been up to since then? Seeing as how she hasn’t recorded anything new in a while, has she retired from recording for good? What new projects or endeavors have she picked up since we last saw her? What happened to Michelle McManus? Where is she now in 2018? 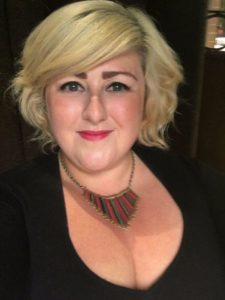 Born on May 8, 1980 in Glasgow, Scotland, Michelle McManus is the daughter of Helen and John McManus; the oldest out of five siblings, she has four younger sisters. For the majority of her life, she resided in the Glasgow neighborhood of Baillieston. Incredibly fond of music, the blonde started to sing at a young age. After graduating from school, she tried her hand out at the popular UK talent competition show airing at the time, Pop Idol. Despite the fact that many were critical about her physical size, she strived forward with the series. In early 2003, McManus participated in the audition for the show’s second season, among thousands of other aspiring vocalists. With her powerful voice, she easily awestruck the panel of judges with her talents; Simon Cowell was especially impressed by her performance.

Created by Simon Fuller, Pop Idol aimed to find the best pop singer in the United Kingdom based on audience voting and participation. Widely popular upon its television premiere, its format has since been adapted in a number of other competitions worldwide; most notably, it gave rise to American Idol in 2002.

Wanting to try her luck in the popular series, McManus decided to audition for the second season which took place in 2003. For the try outs, each Pop Idol hopeful performed in front of a panel of four judges including Neil Fox, Nicki Chapman, Pete Waterman, and Simon Cowell; a format that viewers ultimately embraced. 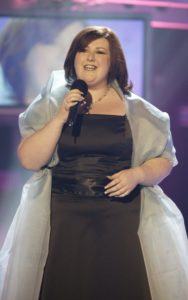 A contestant of the second season, the blonde went up against eleven individuals including Kirsty Crawford, Andy Scott Lee, Sam Nixon, Mark Rhodes, and a few others. During the first live heat, McManus chose to perform a rendition of Don’t Be a Stranger, a performance that quickly established herself as a top contender. While fellow competitor Chris Hide finished second that week, a number of others were eliminated from the competition at that point.

Several weeks later, McManus and the rest of the singers took part in the Live Show on October 26, 2003. Since two extra competitors were added during the previous Wildcard Round, it was announced that two contestants would also be eliminated instead of one during that week. The ninth to perform, McManus sang a cover of the power ballad, All by Myself by Eric Carmen, which safely advanced her to the next stage of the competition; Kirsty Crawford, Leon McPherson were eliminated.

For the second Live Show, the Pop Idol hopefuls were asked to perform a song from their birth year. Born in 1980, McManus sang a stunning rendition of Donna Summer’s On the Radio, which once again moved her to the next round. Out of the ten individuals that performed that week, three were cut from the competition- Brian Ormond, Kim Gee, and Marc Dillon.

After many weeks of ending in the top, McManus fell to the bottom three for the first time during the third live show, which had each of the singers performing one of Elton John’s classics. The fourth to take on the stage, she sang the 1970 hit ballad, Your Song. Luckily while she fell to the bottom during this round, she was safe from elimination and successfully moved on to the next stage of the show.

For the next week, the remaining contestants were asked to perform a disco song. Shooting herself back to the top, McManus dazzled audience members with a performance of Bee Gees’ If I Can’t Have You. While she was safe, Andy Scott Lee was ultimately eliminated from the competition.

Over the next two episodes, the Glasgow-native once again stunned everyone with her vocal capabilities with the songs Ticket to Rideby The Beatles and Feeling Good from the musical, The Roar of the Greasepaint- The Smell of the Crowd. By then, only a handful of Pop Idol hopefuls were left on the show.

As the competition continued into the holiday season that December, the four finalists Chris Hide, Sam Nixon, Mark Rhodes and McManus herself were told to perform a Christmas song on stage. The last to perform that week, she sang the classic titles, Oh Holy Night and Merry Christmas Everyone, which secured her a spot in the semi-finals.

During the semi-finals that took place on December 13, 2003, McManus sang two Judges’ choices- Without You, and I Say a Little Prayer. Following the sing-off, only two competitors were left- Mark Rhodes and McManus. After another stunning performance, it was announced on December 20, 2003 that she had finished in first place, making her the grand winner of the entire competition.

On November 25, 2003, the singer released her debut single, All This Time which was featured in the last two acts of Pop Idol. During the final, it was performed together by both Rhodes and McManus, although she ultimately emerged as the champion. Produced by Steve Mac, the song has been described as a “glorious array of lush harmonies” by music critic, Ruth Mitchell. Accompanied by a music video that was later released in December of that year, it eventually peaked at the top of the UK Singles Chart- undoubtedly promoted by her status in the competition; in Ireland, it also reached number two on the record chart.

On January 24, 2004, the pop singer came out with her second single, The Meaning of Love through the BMG label. Although it didn’t surpass the success of her previous chart topper, it did manage to reach number sixteen in her native UK and number twenty nine in Ireland. While the song itself garnered several rave reviews, it was disappointingly a commercial failure for McManus. 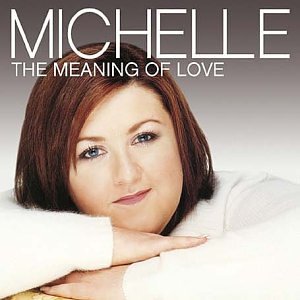 Just a month later, McManus released her highly anticipated debut album dubbed, The Meaning of Love. Issued by BMG (before she was dropped from the label), its production was handled by Martin Sjolie, Andreas Carlsson, Steve Robson, Steve Mac, and Stephen Lipson, among a few others. The artist’s first and only album to date, it featured fourteen tracks including How Can Sorry Every Mend a Broken Heart, I’ll Never Know, Once in a Lifetime, More Than Anything, When the World is not Enough, and Too Fast Too Slow.

Not long after reaching store shelves, The Meaning of Love entered the UK Albums Chart at number three; outside of the UK, it also found similar success in Ireland and Scotland. Despite its performance on the charts however, many critics were critical about the album’s seemingly subpar production values and overall quality. As a result, the title received mostly negative reviews from publications such as BBC Music, The Guardian, The Herald, and The Telegraph.

Still, McManus’ one and only album has since sold more than 200,000 copies in the UK, which earned it gold certification from the BPI.

Since then, she hasn’t come out with much new material- although she did release a charity single entitled, Take You There in 2012, which she performed with Manran.

From the looks of it, it would appear that she’s gone on to focus her attention more on television as she’s been involved with many TV programmes since such as Scotland’s Always Had Talent, The Midnight Hour, and Swing into 2014, to name a few.

This past January, headlines were made after the former Pop Idol winner was allegedly attacked at night on Pollokshaws Road, Shawlands. According to reports, the singer suffered an injured jaw which had left her understandably shaken up. Fortunately, the attacker has since been arrested for the attack.

As for happier news, it has been announced that McManus will be marrying her longtime boyfriend, Jeff Nimmo sometime this year. While they were vacationing in Tenerife, the two got engaged- as per tabloid news. Considering that, it’s probably fair to assume that the songstress has been busy preparing for her wedding, although the exact date of the ceremony has not yet been revealed.

If you’d like to stay in touch with the 36-year-old pop singer, you can do so by following her on social media- you can find Michelle McManus on Twitter at @LadyM_McManus. As well, you can visit her official Youtube channel at @MichelleMcManusVevo.