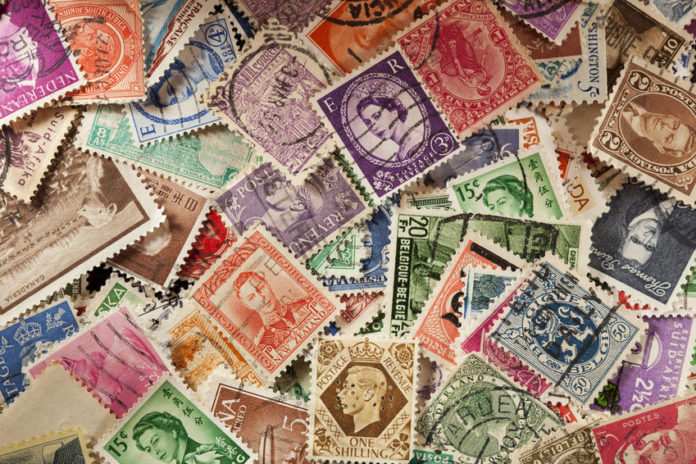 Stamp collecting is a pretty common hobby. IT’s easy to get into if you’re a beginner. Just go to your post office, pick up the stamps that they have on their, and stick them in an album. It isn’t all that difficult. Stamp collecting is one of those hobbies that you can really get into if you want to, too. Some stamps are extremely rare, and just like with any other collecting hobby, there are some stamps that are worth insane amounts of money. In this article, I’m going to be talking about some of the rarest postage stamps ever. I’ll be ranking the top ten rarest postage stamps, discussing their value, and what exactly about them makes them so valuable. Without further ado, let’s dive right into this list. 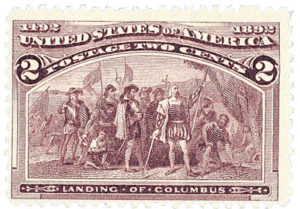 We start our list of valuable stamps off with the Landing of Columbus, which was originally released in 1869. This stamp depicts, as the name suggests, the Landing of Columbus in North America. More specifically, it’s a recreation of the painting of the event by John Vanderlyn, which is a fairly famous painting. What’s exactly so special about this stamp? Well, it was actually one of the first stamps in the United States to be printed using two colors. In order to create this stamp, it had to be run through a press twice. The Landing of Columbus was only in circulation for a year, and although it cost 15 cents back in 1869, today even a more used stamp can be worth over $300. An unused inverted sample of the Landing of Columbus is capable of fetching up to $275,000. 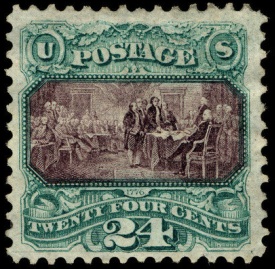 The next stamp on this list rings in at the same general asking price, and it was also printed in the same year. The Declaration of Independence stamp was printed in 1869, and it is also one of the first stamps in the United States to be printed in two colors: green and violet. This stamp cost 24 cents during its circulation, and while the Landing of Columbus features a recreation of the John Vanderlyn painting, the Declaration of Independence features a recreation of the (perhaps more famous) John Trumbull painting. The Declaration of Independence is a highly detailed stamp, and like the previous stamp on this list, even in relatively poor condition it is worth a few hundred dollars. The most valuable version of this stamp, an unused sample with an inverted center, has a much larger price tag. 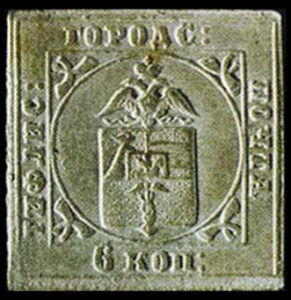 I’ve only talked about stamps that come from the United States thus far, but there are obviously stamps in other countries, right? This next stamp is known as a Tiflis stamp, and it is known as the rarest postage stamp to come from Russia. The stamp gets it name from Tiflis, the Russian city where these stamps were first created way back in 1857. Today, Tiflis is known as Tbilisi, and it’s actually the capital of Georgia. Unlike the other two stamps that I mentioned, where numerous “copies” exist but only a few are worth a lot of money, there are only five known Tiflis stamps to actually exist today. Each of these stamps are worth $500,000, regardless of quality. These stamps have a real story behind them, and the fact that they’re so hard to find certainly contribute to their value. 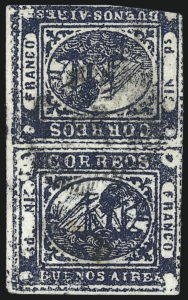 The next stamp on our list of the rarest postage stamps ever is another from outside of the United States. This ultra rare stamp originally just cost 1 peso back when it was printing in 1859. The reason why this particular stamp is so popular is due to an error. A tete-beche stamp is basically what you call a stamp that has two stamps stuck together horizontally or vertically, where one half serves as a flipped or mirror image of the other half. Even in its “correct” iteration, this Buenos Aires stamp is incredibly valuable, with stamps in high condition being worth thousands of dollars. Only one of these “error stamps” are known to exist. There was a second stamp several decades ago, printed horizontally instead of vertically. However, it is suspected that that stamp is no longer in existence. 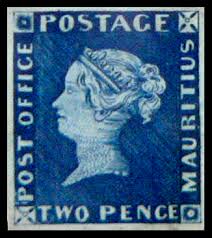 Next, it’s time to talk about this neat stamp, known simply as Post Office Mauritius, or Mauritius Post Office, which were first produced in 1847. There are two versions of these stamps, one in orange and one in blue. The orange stamp would have cost you a penny, and the blue stamp would have cost you two pence. They were originally issued by Mauritius, which was a British Colony that is now known as an independent island nation. This stamp was one of the first British postage stamps that were produced outside of the actual country, and it’s suspected that no more than 30 of these stamps are still existing today. These stamps are pretty famous for being some of the most rare of all time, and both of these stamps on cover sold for a whopping $4 million back in 1993. 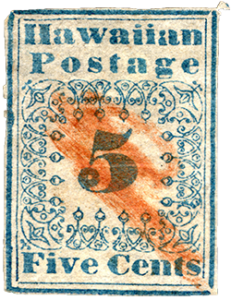 Next, let’s talk about the Hawaiian Missionaries, which are some of the first stamps to ever be issued by Hawaii. Back when these stamps were issued in 1851, Hawaii as we know it today was known as the Kingdom of Hawaii, which consisted of the islansd Hawai’i, O’ahu, Maui, Moloka’i, and Lana’i. Hawaii didn’t deal a lot in main during this time, but the California Gold Rush and the settlement of the American West meant that mail became a much more prevalent thing. As a result, a post office was created and these stamps were also printed, using the printing press of a government newspaper. They originally cost 15 cents, and they were predominantly used by missionaries who were working in Hawaii, which is where the name of this stamp came from. Today, less than 20 of these stamps are known to exist. 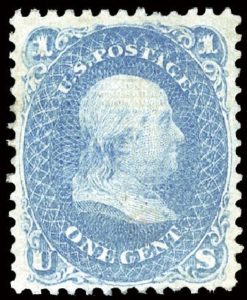 With this postage stamp, we return to stamps that were originally issued in the United States. This stamp was issued in 1867, shortly after the American Civil War. It belongs to a series which featured the faces of other notable old Americans, including Abraham Lincoln and George Washington. (As a fun fact, certain versions of the Abraham Lincoln 1867 stamp are worth up to $200,000 in their own right.) Multiple stamp designs used this particular picture of Benjamin Franklin, but this stamp is the most rare of all of them. The rarest version of this stamp features a z-grill with horizontal ridges. An 1867 Benjamin Franklin stamp featuring this design can be sold for up to $935,000, and only a couple are known to exist. 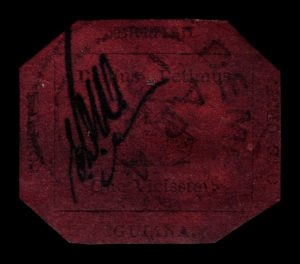 Not everyone knows a lot about stamps, but the British Guiana one cent magenta stamp is well-known as being one of the most famous, rare stamps of all time. This incredible stamp was originally produced in Georgetown in 1856, in British Guiana, a British Colony. British Guiana has since won its independence, and it is known more widely as Guyana, or the Co-operative Republic of Guyana. This magenta and black stamp has a face value of 1 c, and its design features a small black ship and “Damus Petimus Que Vicissim”, which was the colony’s Latin motto. The reason why this stamp is so rare is due to the fact that it was in such limited print. They were originally printed as “emergency stamps” because stamps that the colony had already ordered had never arrived. it is estimated that this stamp can sell for an average of $935,000. 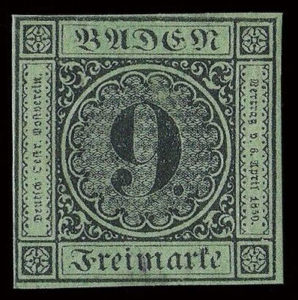 Prior to this stamp, Germany was not represented on this list of the top ten rarest postage stamps of all time. The Baden 9 Kreuzer Error is the most famous and most valuable stamp to ever come out of Germany, and only four known copies of this stamp exist. What exactly is so special about this stamp? This stamp was originally produced in Baden, a German state, in 1851. Baden 9 Kreuzer Error has a face value of 9-Kreuzer, but the thing is, 9-Kreuzer stamps were meant to be colored pink. 6-Kreuzer stamps are the ones that are supposed to be printed in green. These postage stamps are some of the first to ever come out of Baden, and the green error version of the stamps are highly valuable. Only four of these green stamps are known to exist, and an unused version sold at auction in 2008 for over a million euros. 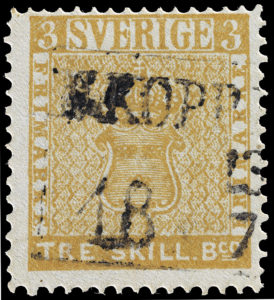 We close out this list with the rarest postage stamp of all time, Sweden’s three schilling banco, also known as Treskilling Yellow. Literally only one of these stamps is known to exist. They were produced in 1855, back when Sweden was rolling out their very first postage stamps. Similar to the Baden situation that I mentioned before, the three-skilling stamp was meant to be printed in blue while the eight-skilling stamp was supposed to be printed in yellow. These yellow three skilling stamps, then, exist as a result of total error. Although it’s possible that many yellow three skilling stamps were produced, only one has ever been found today. The single stamp has been put up for auction multiple times over the years, and its value currently floats at around $2.3 million, making it the rarest and most expensive postage stamp of all time.