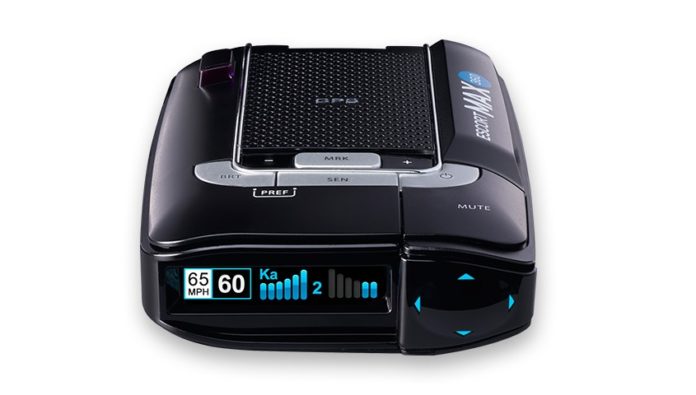 Glad to be getting back to the big boys of the Radar detector industry. I have had the good fortune to check out the entire line from Escort, and more so than any other firm they have impressed me. Even their most basic models come with all the features I want to see in a radar detector, though it has to be said they tend to lack range and, in some cases accuracy, when compared to the more expensive offerings from the company. Toady is dedicated to the Escort Max 360, one of the companies flagship models, and let me tell you, this is an impressive piece of kit.

The Max 360 is an upper range build, while comfortably sitting priced like an upper mid. It comes with all the basics, as well as a whole heap of bonus features that I may have to stop referring to as bonus features, considering how useful and integral to the radar detector experience I have come to see them as. An interesting thing to point out here is ho little the core hardware of these things has changed over the last several decades. It’s one of the reasons that the V1 is still a viable option on the current market. What you are paying for is software, and by and large, Escort have the most advanced features out there.

So let’s get into the nitty gritty, break down exactly why I am so enthused by this build.

I have these articles down to a science, which is lucky considering how much tech I have to go over. The Escort series is famed for many things, their reliability, their range and their feature set, but they fall down a little in the looks department. I find the Max 360 to be a bit of a muddled mess of a build. The display is very high quality, easy to read in all conditions, and easy to understand, but the core look of the build is clunky. That clunk comes with an upside, there is a nice amount of heft here. The Max 360 is expensive, and when you hold it in your hand you can feel that expense. It feels like you could hit it with a brick and have it come up smelling of roses, or at least high quality silicon. One of my favorite things is the position of the mute buttons. That’s right, plural. All their machines I have gotten to test have just the one mute button, on the body, the Max 360 has two, one on the body and one at the end of the charger cable. All companies should have their mute button as close as this. It makes it far easier to turn off a false positive.

There are really no downsides to this build. I usually go into detail here on the issues I’ve had with he model but I found none here. The issues inherent to the cheaper models in the Escort stable have been removed. there are multiple sensors here, so it can tell you where exactly a signal is coming from, making it much easier to notice the false positives. It might not be as sensitive as the Relined , but the range here is impressive, hitting around 2 miles in even poor conditions. The on board smart system will shut off false positives on the fly, and when you combine it with this next feature, you have one of the most reliable and accurate builds on the market.

The app that comes with all Escort models is fantastic. The addition of a phone makes even their most feature light builds a match for more fully featured and expensive models from other firms. It keeps a real time updated map of trouble areas, and lets you and your Max 360 know at all times. The mounting bracket is probably the bets on the market as well. A combination of suction cup and sticky cup, making it fit tighter and sturdier than any other. The Max 360 is affixed with a magnet too, allowing both a steadfastness, and a quick release. You really do get what you pay for here.

There is also the laser detection, but I have found that they only really work in perfect conditions. The tech is getting better and better every year, but it really is much more difficult to build a laser detector. Laser speed systems are point to point, so by the time your detector can detect the laser already knows what speed you are going at. It is possible to pick up refracted lasers from a a few cars ahead, but it tends to be weak, and a little hit and miss.

Overall the core build quality is high. I may not be a fan of the aesthetics of the build, but that is personal taste. I am sure there are those out there who think it’s the tops. I love the heft, the range is astounding and the added features make it one of the most fully featured builds you can buy. The sound made by the Escort series is easier on the ears than the V1, but it is still annoying. The added features make false positives rare, and for most folk will eliminate them entirely, so you tend to be hit with the annoying sound only when necessary.

I love the fact that I have to talk about the legality of these things. there are so few countries where they are legal, which was a bit of a surprise to me. The US is in a short list of countries. They are even banned in Canada, so be careful if you live close t the border. Within the US there are a few restrictions to their use. For non commercial vehicles you are covered by the US Communications Act of 1935 in all but two states. DC and Virginia both ban their use entirely, and you also cannot use them on US Military Bases. In Minnesota and California there are limitations on what you can put on your windshield, so be sure to find an alternative method of fitting that works for you.

Now we come to the point of the review were I feel a fair number of folk will drop off and look for an alternative. the feature set, in my mind, justifies the high price here, but I realize that it is not for everyone. I have other models reviewed that are much cheaper that you might want to check out instead. On average you are looking at around $650, give or take. That said you can usually get them for a bit lower at Amazon.com here. Remember that Escort sell a variety of builds, and this is the most expensive one they offer.

Now we get to the warranty. Escort offer a simple one year warranty. I wish it were longer by default, but that’s where we are. They do offer an extended three year warranty for an additional $29.95, but when you are already dropping $600 or so on a radar detector you kind of expect them to throw that in with it. There is one thing I rather like about Escorts warranty policy. They have what they call The Performance Guarantee. If you get a ticket then they will pay for it. There are a few limitations, it only applies to speeding tickets for the original registered owner of the Escort radar detector, but it is a gutsy move from the firm, and it endears them to me quite a bit.

Overall, I would call the price fair, though I of course would like to see it a little lower. The warranty is standard, and their performance guarantee is a nice bit of icing on an already fancy enough cake.

It is actually a little problematic for me that this build is so good. Granted, there is the high price to disparage, but beyond that this radar detector will suit pretty much everyone. it lowers my word count, and I never like to see that. Joking aside, there is so much here to recommend. The price is high, but the feature list is expansive, and the phone integration is fantastic. The combination of direction detection and personal programmable safe zones, combined with the community app makes this one of the most accurate models on the market, and well worth the asking price. I can see who might not be swayed though, the kind of consumer who wants as bare bones a product as possible, and for those there are other options. If you want the best then you have to go for the Max 360.

To get the Max360 with all coupons and discounts applied at Amazon.com you can click here.