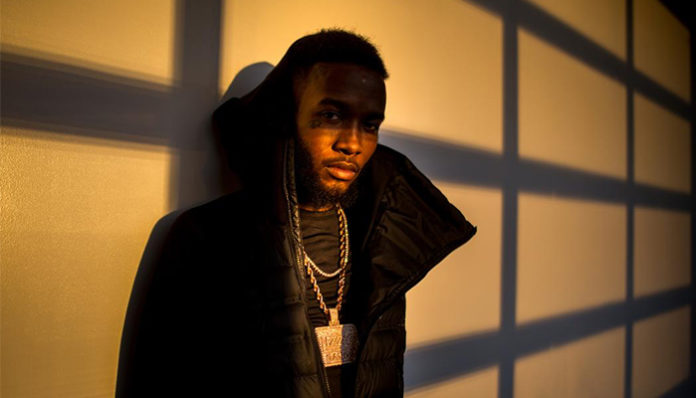 Marquis Amonte King- better known as Shy Glizzy made his music debut in 2011 with his debut mixtape, No Brainer’. Originally from Washington, D.C., he was raised by his mother and grandmother in a less than affluent part of town. As a teen, he went through a phase where he sold drugs and took part in robberies; much of his time was spent on the streets.

Eventually coming clean in his early adulthood, Shy Glizzy decided it was time to get serious about his music career. After adopting his current stage name, he released his first mixtape entitled, No Brainer’ in 2011.

For sure, the rapper has come a long way since then- currently, he has eleven mixtapes and an extended play to his name. Surely, he’s on his way to becoming a nationwide superstar.

According to various sources, Shy Glizzy currently has a net worth in the hundreds of thousands. Where did this money come from? Let’s take a look.

How did Shy Glizzy Make His Money & Wealth? 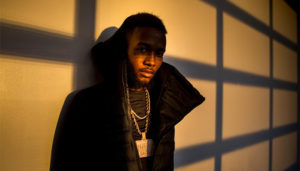 Born on December 12, 1992 in Washington, D.C., Shy Glizzy (Real Name: Marquis Amonte King) spent his youth just north of Fort Dupont Park with his mother, grandmother and younger brother; his father was murdered when he was under a year old. Growing up, he expressed an interest in music early on during his grade school days; when he was eight years old, he won a local talent show with a few of his friends.

Despite his passion for music, his teen years was riddled with trouble. Hanging out with the wrong crowd, he sold drugs and even got involved with a few robberies during his early teens. At the age of twelve, he found himself in a “tattoo party” where he eventually convinced the man with the inking gun to give him a tattoo.

By the time he was fourteen, Shy Glizzy was arrested for petty larceny. From there, he spent the next few years in and out of juvenile detention while attempting to complete high school. According to the rapper, it first started to pen his own rap lyrics after reading the Koran and various other publications at a Rockville Center.

Although he was out at seventeen, he later went on to face charges for theft, gun possession and drug possession, according to public records.

Ultimately, it wasn’t until he was nineteen that Shy Glizzy started to get serious about his music career. After some experimentation, he released his debut mixtape entitled, No Brainer’ under the stage name, “Shy Glizzy”. Made available on January 19, 2011, it contained thirteen titles including 4 My Town, Suck Me With N Hands, Gator, White & Metal, and Ball Out.

By the fall of 2011, the new rapper had dropped his second mixtape, Streets Hottest Youngin’ which included fourteen tracks. A solid release, it featured a few artists including Match, Young Richie P, Mayo, Future, and P-Wild.

On June 6, 2012, Shy Glizzy pushed forward with another mixtape, one titled Law. From there, he released Fly Money– a collaboration with fellow rapper Jose Guapo on November 14, 2012. Eventually that December, he came out with Fxck Rap, his third mixtape of the year. Although these releases didn’t bring him overnight fame, they worked to slowly increase his presence in the rap scene.

On August 1, 2013, Shy Glizzy released his sixth mixtape entitled, Law 2. Another worthy addition to his catalogue, the 14-track project featured a handful of artists including Migos, Doe B, Starlito, Kevin Gates, Yo Gotti, and Ant Glizzy. Produced by individuals such as Beezy, Big K, Rick Flare, Karltin Banks and Lil Lody, the mixtape has since been streamed over 59,000 times on Hotnewhiphop.com.

That year, the rapper was also nominated for an O Music Award for the category of Make a Band Famous.

On February 17, 2014, his next project dubbed, Young Jefe was released. From there, he later released his first charting mixtape, Law 3: Now or Never on December 2, 2014. A follow-up to Law 2, the project included features from Young Dolph, Migos, and Bobby Shmurda, among others. Incredibly popular among his fanbase, it has since been played more than 214,000 times online. As mentioned previously, it also peaked at number 47 on the Top R&B and Hip Hop Albums chart, making it Shy Glizzy’s first release to hit the US charts.

His next mixtape, Be Careful was released on June 3, 2015. A collaborative effort with Glizzy Gang, it Since it was first uploaded onto the mixtape sharing platform- Datpiff, it has been streamed over 140,000 times and downloaded more than 34,000 times.

By September of that same year, he had dropped another tape, For Trapper Only– a collab with fellow rapper Zaytoven.

In the summer of 2016, Shy Glizzy received a boost of fame with the release of his hit mixtape, Young Jefe 2. Although it contained zero features, it boasted twelve new tracks including Let It Rain, Waiting On My Time, How It Go, Rounds, Huh, and Ride 4 U. His best-charting mixtape to date, it ended up peaking at number 14 on the Top R&B Hip Hop Albums chart and at number 134 on the Billboard Top 200.

Most recently, the rapper came out with his debut extended play, The World is Yours on January 6, 2017 through 300 Entertainment. Among its thirteen tracks were features from 3 Glizzy, Ralo, YoungBoy Never Broke Again, and Kash Doll. His first release under “Jefe”- his new stage name, it proved to be a relatively successful endeavor, having reached number 37 on the Top R&B and Hip Hop Albums record chart.

How much has Shy Glizzy earned from all of his musical releases? Although his mixtapes most likely yielded him a limited amount of income (as is the case with most mixtapes), they ultimately helped to bring him exposure. Having said that, they would have still earned the rapper a relative amount from ads in online streaming, etc.

So then, where does his money come from? The obvious answer? From performing live shows. Since he made his music debut in the early 2010’s, Shy Glizzy has entertained crowds multiple times on different stages in various cities across the country. For instance, just last year he joined DaeDae and PnB Rock on the 2016 Birth of a New Nation Tour; it only ended last November after dozens of shows.

Another source of income for the rapper may be a little less obvious- his official Youtube channel. That’s right, artists are able to earn a bit through Google’s partnership program in which ads are displayed during the videos. Since Shy Glizzy first joined in September of 2011, he has accumulated over 125,000 subscribers and has received more than 48,000,000 lifetime views across all of his titles. Using the average CPM of $2 per 1000 views, that itself works out to be $96,000- that is, before Youtube’s cut.

At just twenty four years old, Shy Glizzy is only still getting started in the rap world. In fact, it was just within these past two years that he’s started to gain more recognition with the release of his charting mixtapes and extended plays (e.g. Young Jefe 2, Law 2, The World Is Yours). With everything that he has going for him now, we have no doubt that his success as a recording artist will only be continuing to go up over the next few years. Currently, it is estimated that he has a net worth of $200,000- this figure is likely to increase in the near future, we’d like to think.

In fact, it’s not an unreasonable guess that he’ll also be making a few appearances on television over the next few years.

No, Shy Glizzy is not married. However, he did have a girlfriend named Blaidy the last time we checked. Back in 2015, the couple made the headlines after getting arrested and allegedly going off at police.

It is unknown whether or not the rapper was in any other relationships in the past.

Does Shy Glizzy Have Any Children?

No, from what we know, the rapper does not have any children.

Did Shy Glizzy Go to College?

No, Shy Glizzy did not go to college. In fact, he spent the majority of his high school years in and out of juvenile detention after getting arrested for petty larceny. Having said that, he did go on to successfully earn his GED after plenty of self-educating.

Shortly afterwards, he decided to get serious with his music careered the rest is history.

Where Did Shy Glizzy Get His Name From?

Where did he get his stage name, “Shy Glizzy” from? According to the rapper, “Shy” is a nickname that was given to him by his friends after they had “mistaken his gentle cool for timidity”. As for the second part of his moniker, “Glizzy” is a slang term for Glock.

Just this January however, he made the decision to rebrand himself as “Jefe”- after his mixtapes of the same name.

Where Does Shy Glizzy Live? Pictures of Shy Glizzy’s House

Unfortunately, Shy Glizzy has never revealed any intimate details about his current residence. Having said that, the rapper presumably resides in Los Angeles- with his kind of money, he probably has no problem affording a nice place to call home.

We do not have any pictures of Shy Glizzy’s house to share at this time.

What Kind of Car Does Shy Glizzy Drive?

How Much Did Shy Glizzy Earn Last Year?

According to various online sources, it is estimated that he earned a little under $30,000 in 2016.

A rapper to watch out for, Shy Glizzy has become one of the most prominent artists from the Washington, D.C. area. Throughout his career thus far, he has achieved one charting EP, and two charting mix tapes, one of which made its way onto the Billboard Top 200.

As far as accolades go, he was nominated for an O Music Award back in 2013.

Recently this March, Shy Glizzy dropped a new MV for his track, Congratulations from his debut EP, The World is Yours, which was made available on January 6, 2017.