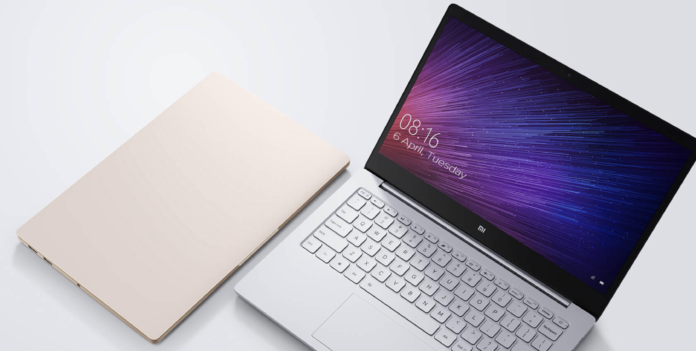 The Xiaomi Notebook Air 12.5 is priced at the budget market, at just $489.99. For that price, you’re getting decent specs, and beautiful build quality:

Like it’s bigger brother, the Xiaomi Notebook Air 12.5 features an all-aluminium build. However, even though it’s a competitor to the 12 inch MacBook, it looks nothing like it. It has a relatively even thickness, making it look much more akin to the MacBook Pro, only smaller. Like the 13.3” version, it has a dual-wedge shape, tapering on both the front and back of the device. The top of the device is devoid of any manufacturer markings – all of that is hidden on the bottom. Also at the bottom are two speakers. This usually isn’t the ideal place to put speakers, but they sound good for such a small notebook.

Open up the lid, and you’re greeted with a familiar MacBook-esque layout. The screen is a beautiful Full HD monitor, with an edge to edge glass cover. The everything is borrowed from the larger version of the Xiaomi Notebook Air. This includes the oversized Microsoft Precision Touchpad, which is superb. Both the keyboard and touchpad are of good quality, but the keyboard can be a bit spongy at times, and not as tactile as I’d like. Overall, the Xiaomi Notebook Air 12.5 is a beautiful looking machine, although it isn’t too far from looking exactly like a mini MacBook Pro.

The Xiaomi Notebook Air 12.5” has a beautiful Full HD 1920×1080 IPS display with edge-to-edge glass. Since it’s an IPS panel, viewing angles are great, and so is brightness. Even though it’s the same resolution, it’s a smaller display than the 13.3” version, so it has a higher pixel density. While I’d prefer a higher resolution on the bigger version, 12.5” at 1920×1080 is perfectly fine. It’s still a lower pixel count than the Retina Macbook 12”, but the price gap is so wide that it’s almost a non-problem.

The processor is roughly the same as the MacBook 12”, but it’s much slower than the i5 in the Xiaomi Notebook Air 13.3”. Even then, it performs well in day to day use, and I had no problem writing or browsing on it. It’s not a powerhouse, but it’s enough. Sadly, you’re unable to upgrade RAM at all, so you’re stuck with 4GB of RAM, which is frankly not enough in this day and age, especially on Windows.

Thankfully, there is a SATA slot to connect an extra SSD if you need to. You probably will need to, as the Xiaomi Notebook Air 12.5” only comes with 128GB of storage. In terms of performance, it’s sort of an iPad Pro replacement. It’s not quite powerful enough to be your only computer, and the screen is too small too. However, it performs flawlessly as a second device, especially if you’re only using it to browse the web.

In real life usage, this number drops to around 7.5 hours of use. Even so, 7.5 hours isn’t too bad, considering this is a small laptop, and it runs Windows. 7.5 hours should get you through the day, and if it doesn’t, the Xiaomi Notebook Air 12.5” will charge to 50% in just 30 minutes. That’s an awesome feat, and a very useful one too. Compared to the MacBook 12”’s 10 Hours, the Xiaomi Notebook Air 12.5” is slightly worse, but it still performs admirably.

Like most non-Apple laptops, the Xiaomi Notebook Air 12.5″ runs Windows. Unfortunately, since you cannot purchase it outside of China, you have to purchase it online using certain websites. Since this is Chinese, the Windows installed is Chinese. You can’t just go in and switch the language on this either. You’ll need a fresh copy of Windows to install on the device, but not before retaining all of the drivers. This can be a risky process, and it isn’t something a lot of people are capable of doing.

If you’re going to go ahead and buy it, be wary of any warranties. Since you’ll be buying it off a grey-market site, you may find that they don’t honour their warranty policies, and they don’t need to, as they aren’t bound by any consumer laws, being offshore.

The Xiaomi Notebook Air 12.5 is a solid notebook, set in an ultrabook section of netbooks. It has a beautiful design, and solid build quality, but it falls behind on raw power. If you just need to browse the web and edit word documents, this may well be the perfect budget laptop. If you need a bit more power, I’d recommend upgrading to the 13.3” version, which has a more powerful i5 processor, and NVIDIA 940MX graphics. At $489.99 at the time of writing from GearBest, the Xiaomi Notebook Air 12.5 is an unbeatable deal.