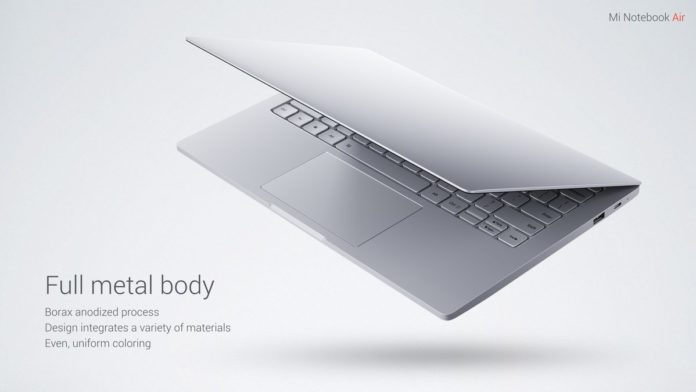 The Xiaomi Notebook Air has very good specs for the price. For your $783, you’re getting:

The Xiaomi Notebook Air is undoubtedly modelled after the late 2015 Macbook Pro. From the all-aluminium design to the weight, it’s almost identical to the Macbook Pro of 2015. To keep it low-profile, Xiaomi has also decided not to put their logo on the lid of their laptop, making it look very clean. However, unlike the Macbook Pro, it has a slight wedge shape, which starts at the middle of the laptop. It’s definitely unconventional, and I don’t think it looks as good as it could if they kept it a uniform height. Open up the lid, and you’re greeted with a beautiful 13.3-inch display, with an edge to edge glass. The inside is also kept relatively clean, save for a small “Mi” logo at the bottom of the screen. The large trackpad is made of glass and is a Microsoft Precision Touchpad. The inclusion of a Microsoft Precision Touchpad is a great feature, as it makes using the laptop a more painless experience. The silver, plastic, keyboard, however, is less clicky than I hoped it’d be, and isn’t as tactile or as stable as the keyboard found on the Macbook Pros (2016). It isn’t too big of an issue, and at $783, it’s definitely something I can forgive. Aside from the keyboard, the Xiaomi Notebook Air is the spitting image of a Macbook Pro from 2015, and while it’s not that bad looking, it’s clearly apparent Xiaomi hasn’t been too adventurous with the design. If you buy this laptop, be prepared to be asked “Is that a Macbook Pro?” a lot.

When it came to connectivity, the MacBook Pro 2016 was often criticised for it’s lack of normal ports, ditching them all in favour of USB-C. The Xiaomi Notebook Air still has cutting edge USB-C but hasn’t taken the leap of faith to completely ditch our beloved USB A and HDMI ports. You can see why, this is Xiaomi’s first cautious try at a laptop, and they can’t afford to have people ditch their devices because of ports. Unfortunately, the USB-C isn’t up to Thunderbolt standard, so it’ll only transfer data at 5Gb/s. The USB-C port is also used for charging. The total lineup of ports on the Xiaomi Notebook Air (13.3”) are:

In addition to these ports, the Xiaomi Notebook Air is equipped with Bluetooth 4.1 as well as WiFi. The WiFi specs are as follows:
Intel 2X2 dual antenna WiFi
Wi-Fi 802.11ac;
Compatible with IEEE 802.11a/b/g/n compatible
Maximum speed up to 867Mbps
Support 2.4GHz, 5GHz dual frequency

The Xiaomi Notebook Air is no slouch. It’s got a sixth generation Intel i5-6200u packed inside it’s small enclosure. Although it’s an i5, it’s only a dual-core, and it’s got a lower TDP than the Macbook Pro (25W vs. 18W). According to notebookcheck.net, the Xiaomi Notebook Air attained a score of 118 on the Cinebench R15 CPU Single 64bit test. When performing day-to-day tasks, the processor was able to glide through, and the fan did not spin up much. When editing video and playing games, the fans kicked in, but they weren’t too loud.

The Xiaomi Notebook Air is equipped with 8GB of DDR4 RAM, with a 2133mhz clock speed. Though 8GB is fine, it’s a shame Xiaomi didn’t give us an option to upgrade to 16GB, especially since the RAM is soldered in. The Xiaomi Notebook Air also has a 256GB PCIe-SSD soldered to the logic board, manufactured by Samsung. Although it has good read speeds of 1.5GB/s, it’s write speeds fall flat, at only 300MB/s. By comparison, the Macbook Pro (2016) has read speeds of 3GB/s, and write speeds of 1.5GB/s. It’s a shame, but then again, the laptop is only $783, so it’s a small drawback.   A major selling point for the Xiaomi Notebook Air is the NVIDIA GeForce 940MX. It’s a great mobile video card, and while it definitely won’t be for serious gamers, casual gamers like me should be able to get by. The NVIDIA GeForce 940MX is comparable in performance to the Intel Iris Pro 550 Graphics found in the Macbook Pro, and the fact that it has 1GB of VDDR5 RAM is a nice inclusion.

The Xiaomi Notebook Air has a 1920×1080 panel with glossy edge-to-edge glass. Since its an IPS panel, viewing angles are superb, and so is brightness. The color gamut is accurate and wide enough, though for me, the color isn’t too important on a laptop, and I’d rather have a higher resolution screen than a more colorful one. The display is a full HD 1920×1080 panel, but it’d be nice if the display were upped to a 2k display. At 13.3 inches, you can begin to see the individual pixels. However, though it is a lower resolution than I’d like, it’s still leagues above the shoddy display of the MacBook Air, at 1440×900. The fact that it’s only full HD also saves battery life, which is a much-needed feature in a laptop.

OS and other Complications

Of course, the Xiaomi Notebook Air runs Windows. However, since you can’t buy it in the USA, you’ll need to buy it from a site like GearBest.com. Since it’s a Chinese laptop, the preinstalled OS is also in Chinese, and you can’t just change the language in settings. If you want to have Windows in English installed, you’ll need to do a driver dump, then do a clean install of windows. This in itself is a slightly risky process, so proceed with caution. Also, since you’ll need to buy it from a third party site, I wouldn’t count on the warranty. While GearBest offers a 1-year warranty with all purchases, it’s important to note that the customer must pay shipping costs to send a faulty device to GearBest, which is located in China.

The Xiaomi Notebook Air is possibly the slickest, best-looking device you’ll be able to buy for under $800. It’s got decent specs, and it’s small and light. If you’re looking for the windows version of a Macbook Air or Pro, this could be it. It’s comfortable to use, and it’s good quality. Combine it’s design, performance, and display, and you have a solid, albeit bland laptop at a great price.