Champagne’s Café in Las Vegas, Nevada, was purchased in 2015 courtesy of Greg Sims and with financial help from his mother. The bar had seen a fair share of history as it was where the Rat Pack hung out in the 60s, and two decades later it became a hangout for mobsters. Long-time customer Frank Cullotta, also a former mobster, has been visiting the bar for almost 30 years and describes current state Champagne’s as gloomy.

Sims was more focused on the wallpaper of Champagne’s and its past, thus neglecting his responsibilities such as training the staff. He was also described by his employees as a spineless owner who would rather look the other way than confront something. Also, some of the clientele who got word that Bar Rescue was coming to Champagne’s protested that they will no longer return to the bar if anything was changed.

Sims knew that the bar had to succeed as it had a very colorful history, hence his decision to call for Jon Taffer and Bar Rescue to ensure that Champagne’s Café will endure.

Taffer and master mixologist Lisamarie Joyce park outside Champagne’s Café and immediately notice its roof caked with bird feces. The interior was decked with décor that come from different generations, making the place a confusing mess. The floor and the walls were also lined with filth which only meant that the owner had no respect for the bar’s rich history. Some of the bartenders went MIA for the night, leaving behind employee Autumn who had to run the counter on her own. She was oblivious on how to mix a proper martini and Sims had to teach her on the spot while Taffer’s spies were around. Taffer then ordered Joyce to go inside the bar after Sims revealed that the bar lacked very basic ingredients for a cocktail.

Sims created an Old Fashioned for Joyce but it was disgusting at best, forcing her to go behind the bar and teach him to how to make one. She also notes the fact that the bar advertised that they had “fine food” but there wasn’t even a functioning kitchen in the premises. Taffer went inside Champagne’s and confronted Sims about the blatant disrespect of his employees. The Bar Rescue host then threatened the owner that, if Sims fails to make his employees respect him, then Taffer too will follow suit.

The missing bartenders finally arrived the next day and Taffer made sure to grill them both. He then summoned Joyce to start the training of the bartenders. She taught the employees how to create classic cocktails like the Manhattan and the Bee’s Knees.

For the stress test, Taffer deployed six groups into the bar, with each group having five people. The arrangement was to test the individual skills of the bartenders as they were severely lacking in that department. Each customer was served three drinks, one from each bartender, to determine who was capable of mixing the best cocktails. All of the bartenders showed promising skill, although their mixing speeds were still lacking. They all earned praise from Taffer, and Sims felt extremely proud towards his employees.

After the test, Taffer called the staff for a meeting. He elaborated that the rescue was difficult as he was being closely monitored by the public. He also stressed that the wallpaper had to go which was a difficult reality for Sims to accept.

The next day, Joyce brought in tools that were used in classic bartending like the crystallized mixing pitcher and the strainer. She had Sims make an Old Fashioned, and the owner revealed that he actually had the skills to create a decent drink. Joyce then taught them a new cocktail named The Vesper which was also another classic. Taffer revealed his blueprints for the new incarnation of Champagne’s which involved redoing the front, replacing the furniture, and putting a new picture spot.

After the renovation, Champagne’s Café was now known as Champagne’s. The front was given a brighter coat of paint to make it more noticeable and fresh. A new signage was erected which had flashing lights so it could gather more attention. Taffer insisted that the minimal changes on the outside was due to his respect for the place. The interior had fancy furniture and lighting that made it look incredibly posh. Taffer had the bar’s original and rare blueprints framed and hung on the walls (which was a surprise for Sims as he knew no one could find those blueprints). The wallpaper was retained, much to Sims’ relief, and Taffer installed black sconces with gold tint to make the walls pop. Taffer also gave them a lifetime subscription to Partender, three new workstations behind the bar, and two new POS systems.

Now with Taffer’s work done, he is confident that Champagne’s will be a testament to the rich history of the city.

Champagne’s Cafe Now in 2018 – The After Bar Rescue Update 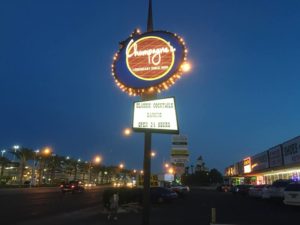 Champagne’s is still open this year.

The bar has several reviews on Yelp for this year, and they were mostly positive. People loved the atmosphere, the bartenders, and the drinks. Their Facebook page also had an impressive number of positive reviews for 2018.

Sims appeared to be very happy with the changes implemented by the show. He mentioned that the rescue helped immensely in boosting his bar especially during that time when business in Vegas was slow.