Farrells Ice Cream Update – What Happened After the Profit 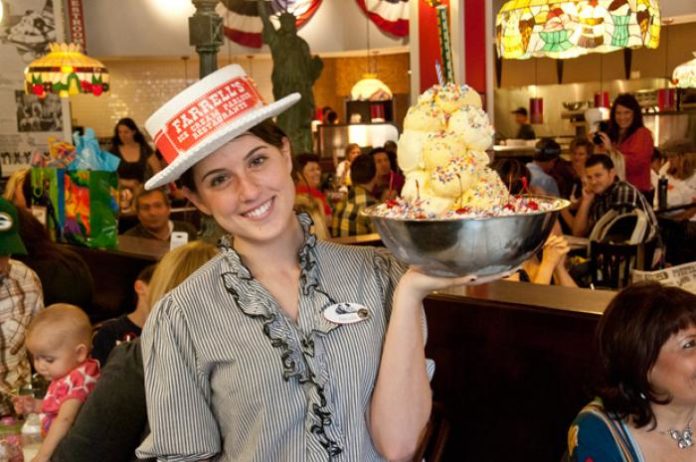 Farrells Ice Cream before The Profit

Before The Profit, and even before many of us were born, Farrell’s Ice Cream Parlour was a very successful chain started by Bob Farrell in 1963. With over 130 locations across the United States, sundaes were served by the thousands every day, alongside signature candy and of course, some diner fare. However, the original owner with a desire to retire, sold off his chain, and soon after Farrell’s would fall into disrepair, with all 130 locations closing down. Decades later, the current owners (who we will get to know better) took over the name and business in 2009, after dealing with some legal branding trouble. This would not be the only trouble though, as the small number of stores would rack up a large amount of debt, nearly $2 Million simply trying to stay open. Despite only being seven stores, it was clear that expansion far outpaced profit. And this is where Marcus and the team step in.

Farrells Ice Cream on The Profit

Starting off the episode, Marcus was clearly quite surprised by the enthusiasm of the singers and drum players, and not in the good way, and was similarly shocked by the huge menu which he immediately spotted as a liability. Introductions between Paul and Mike, the CEO and President respectively with Marcus came off as warm, though within seconds it’s again clear there’s something wrong, as neither could agree on gross income of the store.

The Mission Viejo store, which closed, then became a topic of discussion, where issues with rent and competition helped sink the location, alongside the team not using authentically Farrell ice cream, instead relying on an outside party, Thrifty Ice Cream. Marcus, as one could predict, was not a fan of this move. Theming of the candy side of things was a little confusing, including a large store of bacon products like bacon soda.

In terms of employees, both the bosses’ daughter ( who worked in marketing) felt limited, and everyone else seemed to be multitasking in non-specialized areas which was detrimental to performance. Travelling to another location, Marcus meets Travis, a previous Hilton worker who took a massive dip in pay to try and keep the dream alive. Acting directly against this appeared to be equipment failures, and again the singing.

After this visit, Marcus takes the team back to talk money. They appear to have $17 Million in sales, which is a considerable number, except when profits are taken into account. Out of 5 locations, only three were profitable, and then (when including the losses) only accounted for a couple hundred thousand. Total debt racked up to $1.94 Million, which made it impossible for improvements or even keep up.

The next day, Marcus meets with the CEO and President again. Marcus makes it clear that all Farrells has is the brand, and that’s what he offers to invest $750,000 into, with 51% ownership. It’s clear that as soon as the deal is made, he has every intent of changing things up. First thing up? No more propping up failing stores, there will be help, but the stores will need to perform on their own merit to survive the year. The team then goes to, of all place, Mel’s diner in Universal Studios, California. They take the advice of the head chef, where he recommends a menu reduction, and some aesthetic tips including portion sizing. Next stop was the candy store, where conflict between the HR manager split herself from the rest of the group in disliking the idea of a Create Your Own option for candy bags, which could have massive profit margins. Later, a focus group was formed to determine what needed to be done for the candy section, which showed that Marcus and the Marketer were on board for what would be greatly profitable. However, conflict arose between what could be called a territorial dispute between HR and Marketing.

Later, the team goes to another Ice Cream store, Fosselman’s, to work on the original ice cream recipes. It’s clearly going to be a higher as an initial investment ($30 from $17.50) however it’s again shown that the owners made a costly mistake. Instead of keeping their Ice Cream cold, below 0 degrees, they had it at around 10, which compacted the ice cream and created 30% loss. This equates down to only a 6 cent per scoop increase, which is barely a blip on the radar. Then, Marcus confronts Mike for blaming everyone for his own errors, which didn’t really come to a satisfactory conclusion.

Back at the candy store, Sandy (who heads HR) has an emotional issue with Marcus’s renovations in terms of candy selection, but it’s clear that with or without her, the operation will continue. After, Marcus heads with the CEO and president to secure food deals where they find out that if they pay on time, they can save around 8% on their bills, saving the company $320,000 a year, which is more than their total profit of the previous year. New kitchen equipment is also shopped for, to reduce maintenance costs.

Later, the team links up again but in worse terms. Mike calls Marcus, and asks for more money as they need to pay rent. Another $200,000 to be exact. Paul quickly loses his composure at the gravity of his mistake, and Marcus stands hard to not loan the company more money. Instead, he brings in Travis. Travis, sadly, advises that the Rancho location should be closed down. For his suggestion, Travis is given 5% equity by Marcus, as Mike joked to him about getting some numbers help. Travis is immediately promoted to oversee the managers.

In terms of improvements, staff singing was quieted, the stores aesthetics (especially the candy store, which had Create Your Owns, a cleaner look and even gift baskets) was improved, as was their selection, and the menu trimmed down. However, to make all these improvements before opening was a major rush, and it wasn’t clear if they’d fix everything in time. It was clear that all the trips to other locations inspired the Farrells brand to do so much better. But, with all these improvements, did the Farrells chain break a curse and return to former glory? Let’s take a look.

Farrells Ice Cream Now in 2018 – The After ‘The Profit’ Update

Sadly for Farrells, it would appear that history would repeat itself in a few ways. Despite Marcus infusing the brand with over $1 Million in total, multiple locations have continued to close, with the flagship restaurant suddenly closing for remodeling not long after the show aired. This has been a huge problem for their employees, who have been out of work for some time. At time of writing, the renovations have yet to be completed, and only two locations, Riverside and Brea are currently open. It would appear that The Profit did have an immediate increasing effect on customer interest, however over the months both visitation and ratings of the parlor have staggered. Likewise, it appears that though there is a company website, it’s yet to roll out to the public, which given the timeframe is worrisome. While I don’t personally believe in such things, it seems that the Farrells name may have been bad luck on what otherwise would have been a sweet deal.