West End Coffee Company Update – What Happened after The Profit

West End Coffee Company supplies restaurants and specialty shops in Greenville, South Carolina. The owners, Becky Schram and John Brown, purchased the business for $500,000 in 2012 -when they were in a romantic relationship with each other. Now, it’s generally bad policy to enter into a relationship with a coworker because if things go south it’s hard to work together. This situation proves that that goes double for co-owners who aren’t yet married. The two split up a year into owning West End Coffee Company, and the break up put stress on the business and all of it’s employees.  Becky and John were no longer able to act as a team, and it was negatively affecting their business. 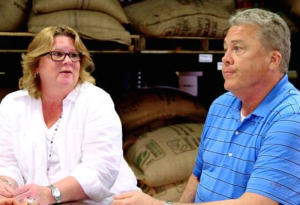 Marcus Lemonis entered the office for West End Coffee Company, and only had a moment to enjoy the scent of freshly roasted coffee before he heard the two owners bickering. He came into the room in time to hear John accuse Becky of wanting Marcus to fix all of their personal issues. Marcus interrupted the fight to introduce himself to both of them and asked for a tour. He was shown the storefront and told that the coffee was also being sold at grocery stores such as Whole Foods.

Marcus was shocked to find out that neither business owner knew how to actually roast the coffee. He admonished them, stating that that was a major part of their business and they really should know it. Marcus compared it to owning a repair shop and not knowing how to change the oil on a car. While Becky and John both agreed with him, they still hadn’t made the effort in all the years that they owned the business to learn the skill. Becky informed him that they had kept the master roaster the worked with the previous business owner. That man worked 1 to 2 days a week, and Becky’s son was learning the process of coffee roasting so that they had a backup.

Marcus asked how many pounds a week they could roast if they were at full capacity. John told him 7000 pounds of coffee. Their current production was one-third of their maximum. They could be making three times as much money per year. They just had to get the sales in line first before they increase their production. West End Coffee Company had the potential to make over $3 million in revenue at 50% profit per year. Marcus was very attracted to those numbers.

Marcus tasted the coffee that he just roasted, and declared that he liked it despite not being a coffee fan. He saw that they had a very good product and motivated and dedicated employees. The tension between the two co-owners and their inability to work as a team was one of their greatest issues. The simple question of how many employees they had prompted a fight between the ex-lovers. Marcus thought that it was amazing that the other employees work well despite the dysfunction between Becky and John.

Marcus discovered that Becky had only put in 18% of the money, with John putting up the rest of the cost between cash and a loan from his 401(k). In an aside to the camera, Marcus noted how weird it was that they still acted like they owned the business 50-50. Becky stated that she was on the board of directors for John’s 401(k), so he could technically be fired as CEO if she wanted to screw him over. Marcus went over the financials was the X couple, and found out that John was the one that handled all of the money. Marcus gave them credit for putting together solid financials but said that he wasn’t sure how responsible they were for managing their employees. Marcus said that the biggest risk to West End Coffee Company was the owners themselves. They agreed, and Becky said that that was why she had called to get on The Profit.

Marcus offered John and Becky $200,000 in exchange for 51% of the business. There was a catch Becky needed to relinquish her power over John. She had to step down from being a board member for West End Coffee Company so that she would no longer have such heavy control over John’s money. Becky agreed. The ex-lovers took the opportunity that they saw in the $200,000, which would allow them to pay off the debt in the business and have money for cash flow. John said that he was willing to see the relationship in a new light that would allow them to work together in the business. Marcus wrote the check, and the three shook hands.

After a meeting with the employees, Marcus arranged a meeting with Larkins – a local restaurant chain. He wanted John and Becky to make the deal with Larkins for West End Coffee Company to be their only coffee distributor.  Marcus stated that he arranged this meeting in order to allow John and Becky to prove their ability to work together. He told them that this would allow them to open much bigger doors for their business. He said that their ability to work together was a deciding factor on whether or not he would be willing to finalize the deal.

Marcus joined Becky and John in their dinner meeting with the managers of Larkins. In an aside, Marcus discovered that Larkins serves over 600,000 customers per year, and about a third of them drink coffee with their meal. He did the math and discovered that if John and Becky make a deal at this meeting, they would generate $42,000 in sales per year. That was 5% of their annual revenue. They were able to make the deal, despite Becky cutting in and almost ruining it for them.

After the meeting, Marcus walked back to the West End Coffee Company office to perform inventory and cut out extras that they don’t need. It was discovered that Becky made a costly inventory mistake, and she was irate about it getting mentioned. Marcus told her that the mistake wasn’t the problem, but they need to have an inventory system in place. That way they wouldn’t have to throw out thousands of dollars of expired merchandise.

After Becky’s explosion regarding the inventory, John gave her an ultimatum to have the resignation letter that day. Marcus also got on Becky’s case to have the papers signed that day, but Becky revealed that John was contacting business brokers to sell West and coffee. John tried to deny that he was attempting to sell the coffee roaster company, claiming that it was a free country and he should be able to gather alternate information. Marcus looked insulted and accused John of shaking his hand when it actually meant nothing. John tried to deny it, but Becky read the text messages that he’d sent her threatening to sell the business from under her nose. The text also said that Marcus was irrelevant to West End Coffee Company.

Marcus told them that somebody had to go, and he tried to figure out who was the salesperson. He discovered that they were doing duplicate jobs. Marcus walked away shaking his head, saying that neither of them was able to run a business at the moment. Becky followed him and told Marcus that she wants to really be the one that was calling the shots. Marcus explained that she was holding John hostage with not signing that piece of paper. He convinced her to sign the form so that he could hold onto it. Marcus waved the signed form in John’s face and told him that if he ever went behind his back to business brokers again, Marcus would kick him out of the business.

Marcus designated Becky as the inventory manager and John as the sales manager. He also put in a check and balance system between the two of them. After putting the system in place, Marcus went away for a few weeks to see if they could work together. Once he came back, he walked in on John and Becky fighting again. Marcus noticed that they hadn’t implemented the inventory system, or had any backstock coffee. John insisted that he had to follow up meetings with Larkins, but Marcus said that the owner of Larkins had contacted him and said that follow-up was terrible.

John and Becky started fighting like kindergartners, and Marcus walked away frustrated. He yelled at Tom, saying that he didn’t like how he’s treated Becky with such disrespect. He told John and Becky that they could not work together and that one of them had to go. He didn’t believe that the three of them could work together anymore.  In the end, Marcus decided that he would be the one to leave since neither of them gave him the impression that they could run the business in his absence. 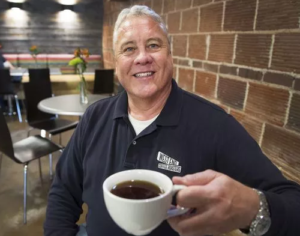 Since their episode aired in 2014, West End Coffee Company has gone through many changes. Rebecca Schram is no longer employed there. It seems like John got his wish, and was able to fire her. They moved shop from their location on Markley Street in Greenville South Carolina to a brand-new location in downtown Greenville. The location opened up in August 2015 as both a warehouse and a retail coffee shop. The company started serving coffee and smoothies at the TD Saturday market in South Carolina. Their website celebrates the West End Coffee Company being open 25 years. It also shows a new coffee subscription service which allows customers to choose which coffee they would like to receive every month. If you like to check this out, click here to access the West End Coffee Company website.