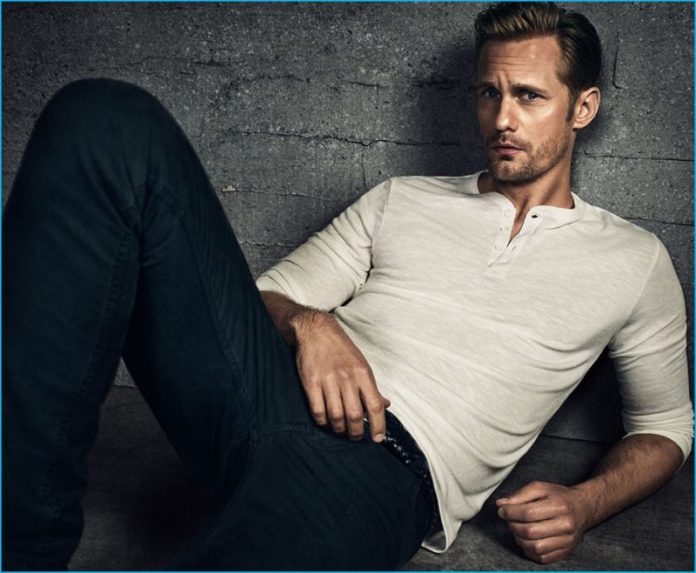 Some actors work for decades to hone their craft before making their big break while some will still slave away and never taste true success. Then there is that rare third breed with such natural talent that picking up acting or putting it down is an easier choice than picking pizza toppings. Alexander Skarsgard is just such an actor, finding early fame in his native Sweden before deciding to to quit acting for over seven years before returning to instant attention and acclaim. What’s the real story behind this Nordic heartthrob who’s at the top of everyone’s list of downright sexiest vampires? Let’s find out.

How Did Alexander Skarsgard Make His Money & Wealth? 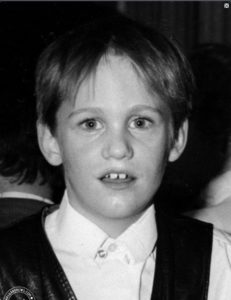 Born Alexander Johan Hjalmar Skarsgard on August 25, 1976 in Stockholm, Sweden, he’s the son of veteran actor Stellan Skarsgard (The Hunt for Red October, Good Will Hunting, Dr. Erik Selvig in the Marvel Cinematic Universe, among other roles) and his first wife My Agnes. The oldest of six siblings (and two half-siblings), Alexander wasn’t the only one to be bitten by the acting bug, as his brothers Gustaf, Bill, and Valter are also actors. He got his start very young, and at the age of seven was offered a role in the film Ake ochs hans varld (Ake and His World, 1984), jump-starting his career and leading to him being cast in the 1989 TV series Hunden som log (The Dog that Smiled) and becoming a known child star. Only 13, Alexander was uncomfortable with the sudden fame and being constantly recognised in his home country of Sweden, and so decided to put aside acting and move on with his life, joining the Swedish military for 18 months at age 19 to fulfil his compulsory national service. After completing his service in 1996, Alexander spent six months in England at Leeds Beckett University studying English and six months in New York studying acting at Marymount Manhattan College. He returned to Sweden having decided that it was time to go back to acting.

Back on the scene, Alexander took various small parts in TV series and films, even roles in small theatre productions, more concerned about doing his best work than building a personal brand. Nevertheless, he attended an audition while on vacation in the US and landed a role in the 2001 critical and commercial hit Zoolander. Meanwhile, back in Sweden, his work was getting serious recognition so in 2004 he moved permanently to Los Angeles while returning to his home country periodically for roles in film and TV. His big break was right around the corner, however, as Alexander took the starring role in the 2008 HBO miniseries Generation Kill, learning he’d been cast only 36 hours before he had to catch a flight to Namibia for filming. He auditioned for the role of vampire Bill Compton in HBO’s developing series True Blood (2008-2014) after hearing that Alan Ball (Six Feet Under, American Beauty) was attached but was picked for the role of vampire Viking Eric Northman. It was True Blood that would make him a household name and bring his raw sex appeal to an entirely new audience, as well as bringing him new opportunities, such as starring in a Lady Gaga music video (‘Paparazzi’) and model work for designer Hickey Freeman. Several major film roles followed, from the prestigious (Melancholia, Straw Dogs, What Masie Knew) to the not-as-well-regarded (Battleship, The Legend of Tarzan).

Most recently, Alexander has starred in the role of an abusive husband opposite Nicole Kidman in HBO’s miniseries Little Big Lies (based on the Liane Moriarty novel of the same name), for which he’s been nominated for an Emmy award. Having achieved a great deal of success since he took his first role as a child, Alexander Skarsgard has shown the kind of natural talent that most actors only dream of and at the prime of his career, he shows no signs of slowing down. 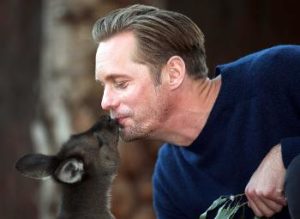 Alexander is single, so the line for swooning starts here, ladies! If you think you have a chance with him, better try catching him on the rebound as he’s fresh out of a two-year relationship with British model and fashionista Alexa Chung. Having initially set a low profile over their relationship, paparazzi and their mutual fans put two and two together and the cat was out of the bag. While she had been briefly with Chris Martin of the band Coldplay, their fling didn’t last long and she and Alexander ended things in July 2017. With respect and caring towards each other, it appeared that packed schedules and long distances were just too exhausting to manage on top of a relationship, and really, who could blame them? Still, Alexander doesn’t seem eager to jump into a new coupling so wedding bells anytime soon are completely off the table, giving every single lady admirer an equal chance to entrance this handsome stud.

Did Alexander go to college?

Alexander attended both Leeds Beckett University (United Kingdom) and Marymount Manhattan College (United States) where he studied English and acting respectively. He was at both for only six months before moving on, though in 2011, Leeds Beckett University awarded him an honorary doctorate in the arts and is proud to consider Alexander an alumni.

Has Alexander won any awards? 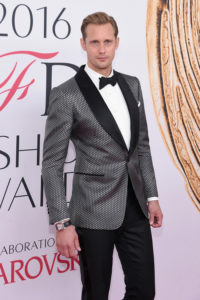 Alexander has won several awards during his acting career. In 2003 he won both a Grand Prix and a Press Award at the Odense International Film Festival for his directorial debut, To Kill A Child. In 2009, Alexander was awarded a Scream Award for Best Villian (True Blood) and a Satellite Award for Best Television Ensemble (True Blood), and would go on to win another two Scream Awards for Best Horror Actor (True Blood, 2010 and 2011) and another in 2011 for Best Ensemble (True Blood). Currently, Alexander is nominated for an Emmy Award for Outstanding Supporting Actor in a Limited Series or Movie (Big Little Lies). And not to overshadow his outstanding TV/film accomplishments, he’s also been named the Sexiest Man in Sweden five times, which we’re pretty sure might be some kind of world (or Swedish) record.

What causes does Alexander feel passionate about?

Following his role in Generation Kill, Alexander was named the US ambassador for the American team participating in the Walking With the Wounded fundraising event on a journey by foot to the South Pole to raise money and awareness for wounded veterans of British military service. Thwarted by dangerous weather, his team joined forces with the UK and Canadian/Australian team, featuring Prince Harry and actor Dominic West, and with their company of wounded veterans, reached the South Pole on December 13, 2013.

What does Alexander do with his wealth? 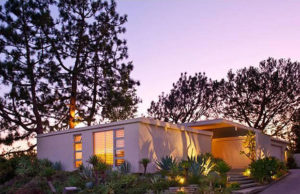 Why make money if you can’t enjoy it? While Alexander isn’t into shameless celebrity excess by any means, it’s no crime to take the money you worked for and make it work for you! He drives a classy black Audi A8 because a flashy sports car might seem cool but nothing can beat expert German luxury design. He had owned a $2.9 million, 2,500 square foot ‘bachelor hideaway’ hillside mansion in the ritzy Los Feliz area of Los Angeles but sold it on the sly in 2015. While his current place of residence in on the sly, rumours had him eyeing a $4.39 million condo in the East Village, NYC, a former synagogue. He’d been spotted viewing the property and the buzz was that Alexander was wanting to move closer to his then-girlfriend Alexa Chung, but with their recent break-up, that deal just might be off. Wherever he ends up laying his head, it’s sure to be spacious, amazing, and worth more than a small country’s GNP.

Only 40, a sexy stud, leading man, sought-after actor and newly single, the world is at Alexander Skarsgard’s feet. He’s a frequent target of the paparazzi feeding a fan obsession that spans the globe, which is quite an accomplishment for a Swedish lad who took his first role at such a tender age. Whatever roles, awards, and romances lie in this star’s future, he’s sure to ride the wave of his talent, determination, and hard work as far as it will take him.