Top 10 Strangest Buildings In The World 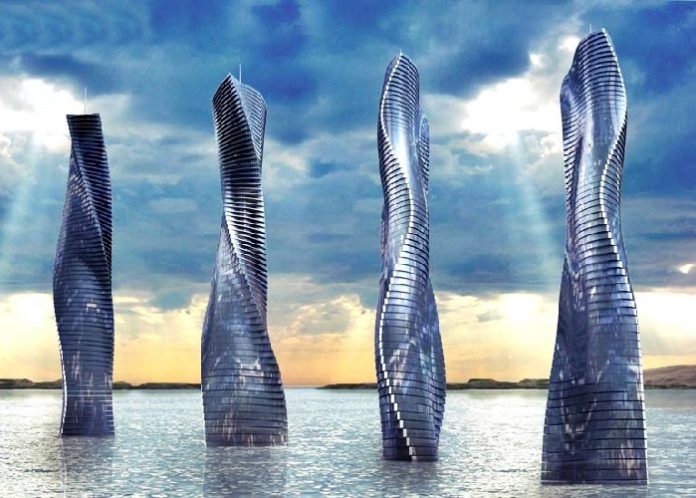 The marvels of modern engineering have seen many bizarre and unusual buildings built for a variety of purposes during the last century or so, and if you’ve got an architect with big enough ideas, and enough money to create something truly unique then virtually nothing is impossible when creating a work of architectural greatness. But what are the strangest buildings in the World today? And what unique and ambitious buildings are at the planning stage and due to be constructed in the near future? 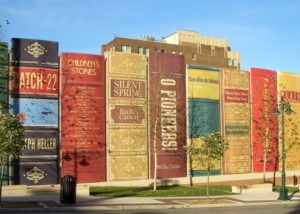 As an avid reader there’s nothing I like more than the tranquil peace of libraries, searching for a big weighty book that I can enjoy over weeks or months, and Kansas City, Missouri has a library that boasts the biggest books of all, with a selection of titles that measure 25 feet high and nine feet wide. The oversized books were constructed in 2006 to hide the less than attractive parking garage contained on the first floor, and library users, and the local community were invited to vote on which titles should be displayed in the façade. 22 well-known books were selected including The Lord and the Rings and Catch-22, and since their construction the bright and colorful giant books have become one of the best known and most popular features of downtown Kansas City. 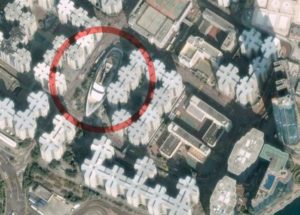 The Whampoa shopping mall in Kowloon, Hong Kong is no ordinary mall. Surrounded by high rise buildings it appears to be a 360 foot long boat sitting in a tiny shallow pool, but it’s just an illusion, and this vessel is firmly rooted in good old foundations of concrete and steel. The mall, built as a nod to the areas past as one of the busiest dockyards in Asia, is home to over 300 shops, numerous bars and restaurants, as well as bowling alleys, amusement arcades, movie theaters and even a gym. The strange setting for such a building has confused more than one user of Google Maps who noticed the enormous boat hiding between the tower blocks and jumped to the conclusion that it was one of Google Map’s occasional Twilight zone style glitches. 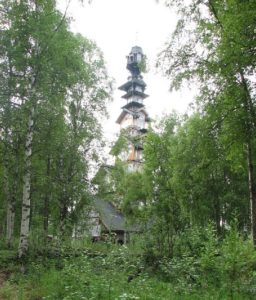 The wild and rugged landscape of Willow, Alaska features a unique building with a mysterious past. With a number of haphazardly placed storeys on top of each other, the Dr Seuss House, as it has since come to be known was built over a decade long period by the original owner, according to the local legend in order to have a good view of Mount McKinley, or Denali as it’s better known these days. The legend tells of a forest fire that took place shortly before construction began, and as a result the house was originally surrounded by a new growth of small trees. As the surrounding forest grew around the house the owner would add another storey, which eventually culminated in such an unusual and iconic building. What is known for sure is that after the original owner died the building fell into a neglected state and remained unoccupied for years, but it’s now been privately purchased and extensively renovated to make sure it doesn’t come crashing down to Earth. 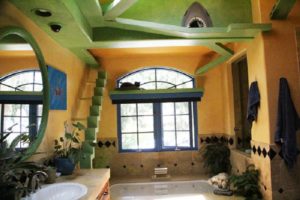 Architect and entrepreneur Peter Cohen has built a fully customized home for cats in Goleta, California after being inspired by ‘The Cat’s House’, a book by Bob Walker who created a similar feline-friendly home in San Diego. Fortunately Peter also happens to own a construction company and he’s given his workmen free reign to be as creative as they like since remodelling of his own House of Cats began in 1997. The home, called House of Neko which means cats in Japanese, is these days filled with tunnels, sprial walkways, ledges and other purrfect parkour attractions for the 18 rescue cats that share the home with him. Peter, who describes the House of Neko as an ongoing project has spent over $35,000 on renovations in the last twenty years, and he’s even installed state of the art design features such as an innovative ventilation system that eliminates the sort of odors you would normally expect to experience in such a high cat population area. Peter offers free estimates for other fans of felines who want their own ‘Home catomisation’, and as he’s such a good friend to cats, I’ll let him off the terrible pun because he’s got such a great Cattitude to our furry friends.

#6 – The House between the Rocks – France 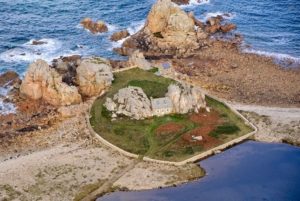 Castel Meur, or The house between the rocks as it’s better known is a small, traditionally charming cottage in Brittany, France that was built in 1861. Nothing unusual about that you may think, until you consider the neighbors, which happen to be two enormous jagged rocks that the building is wedged between. The cottage was originally built with it’s back to the sea in order to escape the effects of the frequently stormy conditions, with the neighboring stone outcroppings to provide even more protection. Unfortunately such natural defenses couldn’t protect the building from some adventurous Japanese tourists who decided to clamber around on the roof, damaging it in the process. The current owner, a lady from Ohio who is the grand-daughter of the original owner has now restricted access with a perimiter wall, but it’s still visited by hundreds of tourists every year eager to grab a long-range shot of the iconic structure. 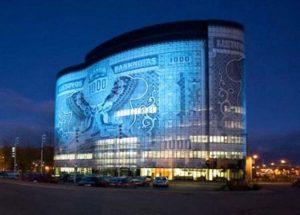 Money is always the primary consideration when you’re planning a unique and iconic building, but Lithuania made money the primary attraction of the Office Center 1000 when it was built in 2008. The commercial 10 storey structure, generally known by the far more interesting name of ‘The Banknote Building’ features thousands of engraved glass sections on it’s facade which slot together to create the image of a 1,000 Lithuanian Lita bank note. It was built to celebrate Lithuania’s entry into the EU in 2004, which also resulted in the country ditching the Lita in 2015 and switching to the Euro instead, but even with that ironic twist of fate it remains one of the most iconic sights and popular tourist attractions of Lithuania’s second city Kaunas. The building is illuminated at night, to great effect, and is used as the focal point of elaborate firework displays and laser shows on public holidays and national celebrations. 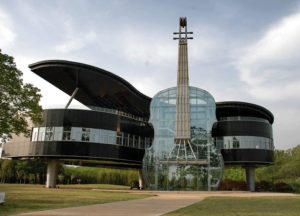 The Piano building in Anhui Province, China is a 50 to 1 scale model of a grand piano and a violin made almost entirely out of clear and tinted glass. Built in 2007 to encourage tourism to the area the piano features two separate concert halls, with the transparent violin containing lifts and staircases to take visitors to the upper floors of the piano structure. The unique and beautiful design attracts thousands of visitors to the region, and future plans for unusual architecture in Anhui Province include a giant Ping-Pong paddle and ball shaped building, a futuristic stadium in the shape of a football and other unique works of architecture, none of which have been completed yet due to recent concerns from the Chinese authorities about ‘obscene’ and non-traditional buildings. The Piano and Violin are lit up with hundreds of neon blue lights at night, all of which are powered by several wind turbines discreetly tucked away inside the open top of the piano. 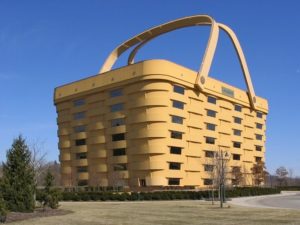 The Longaberger Company of Ohio built a new Headquarters in 1997, and company founder Dave Longaberger had only one design in mind for the new building. He commissioned architects to create a building based on the companies biggest seller, the ‘Medium Market Basket’. The Basket building, which is an exact replica of the Market Basket scaled up 160 times the usual size took a year to construct and cost $30 million. It features a 30,000 square foot atrium that stretches over 9 floors and floods the interior with natural light. The handles of the basket even have a heating system to stop ice forming in cold weather. The giant basket, located in Brunswick, Ohio became one of America’s most iconic buildings and won a Build Ohio Award, but after Dave Longaberger’s death in 1999 the company hit tough financial times and in 2016 the 500 employees located there were moved to a new, less expensive to maintain headquarters nearby. Local fans of the building have since attempted to raise funds for the popular landmark with the hope of turning it into a museum, but the giant basket still remains unoccupied as so far they have failed to raise enough funds to purchase it. 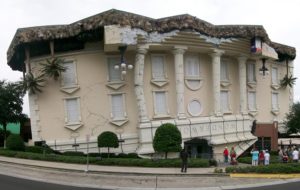 No list of unusual buildings can really be complete without the wonders of the Wonderworks buildings. The company specializes in scientific and educational entertainment for children and have guaranteed that their young customers will find the Wonderworks buildings anything but boring. With five locations across Florida, Tennessee and New York they are known for their upside down buildings and they explain the reasons for it on their website. According to the Wonderworks legend one of their top scientists created a man-made tornado, which ripped the Bermuda Triangle based laboratories from their foundations and carried them for thousands of miles, before they crashed back to Earth across The United States. It’s a tall tale but the upside down buildings never fail to impress anyone who sees them, and the company slogan of ‘Let your imagination run wild’ is perfectly demonstrated by their unique architecture. 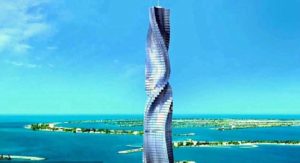 Dubai has a taste for the exceptional and sensational, particularly when it comes to their architectural vision, and the home of the World’s tallest building is currently constructing one of the most bizarre buildings ever built. The Da Vinca Tower, also known as the dynamic tower is an eighty storey, 1,400 ft structure that is scheduled to be completed by 2020, and it doesn’t just incorporate one unusual shape, instead it’s planned to have a constantly changing profile in the Dubai skyline. Each of the 80 floors are designed to rotate at a speed of 20 feet per minute and make a full 360 rotation in three hours. Containing both residential and commercial space, occupants will be able to enjoy a full view of the surrounding area and the continually rotating floors will dramatically alter the shape of the building. Although all the design elements required to build the tower have not been fully developed it’s believed that construction on the tower, which only started earlier this year, will be particularly rapid as over 90% of the tower can be built in a separate location and shipped to the construction site. The motion is designed to be slow enough to be virtually unnoticable to occupants but still fast enough to subtly alter the view every few minutes, and the building will also be energy efficient enough to provide it’s own power requirement, and that of another five buildings with the same electrical needs.