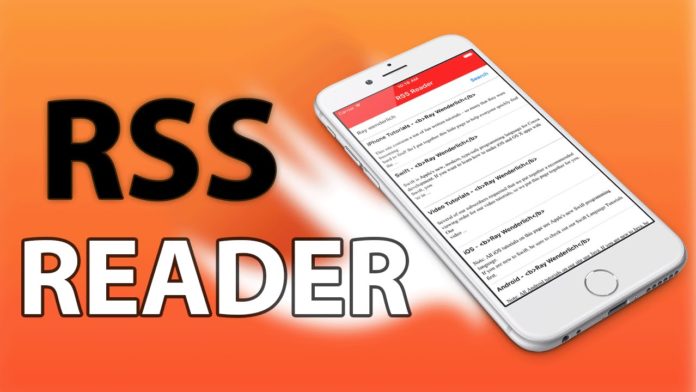 RSS really doesn’t get as much love as it used to, and that’s actually a shame. Being able to pull stories from multiple sources into one good app is great, especially when you can customize these to show what’s important to you. Now, as mentioned before, the pool of RSS users has been dwindling for some time, but that doesn’t meant that developers haven’t seen it as a potential goldmine and filled the virtual shelves with iteration after iteration of RSS Reader apps for the iPhone and iPod/iPad series of devices. Here, we take a look at 6 of the best RSS reader apps. 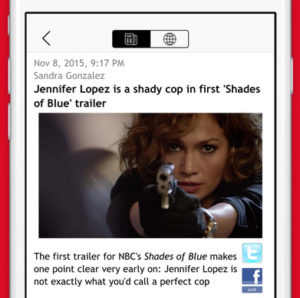 It doesn’t get much more simple than this. Free RSS Reader is exactly as it says on the tin. Pretty bare bones in terms of features, this RSS reader is great for people who tend to have a lot of other apps and need to try to conserve space. It does feature a built in browser which does make for easy blog surfing, and plenty of sharing options across most of the traditional social media platforms (Facebook, LinkedIn and Twitter). Where Free RSS falls short is how it’s a victim of its own size; Little sorting options, and customizability is a bit limited when compared to other options. However if you aren’t a power user and just would like to streamline your reading a bit, Free RSS Reader is a good choice. 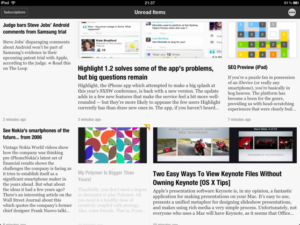 Of all the RSS readers listed, Newsify may well be the critical darling. Offering downloads to iPhone, iPad and even the Apple Watch, Newsify can get you needed info any time and any place so long as you have an active internet connection. Even without a connection, you can still view articles and images offline, though this can suck your memory dry like a canteen in the desert if you aren’t careful (or are a bit overzealous in subscriptions). One drawback to Newsify is that it (as of writing) has a weird bug when the user switches over to Safari to read an article it tends to freeze up the article list in terms of refreshing. This doesn’t require much work to fix; Just a quick reboot of the app, but this can be a problem if you have a lot to read and not a lot of time to do it. Otherwise the performance, listing of articles in order of publishing and the amazing customer service more than make up for these slights. While the free version is nice, options range up to $30 for premium services which could be useful if heavy RSSing is your thing. 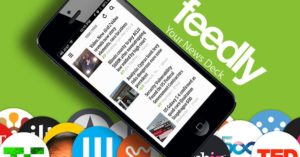 Currently one of the most popular RSS options for iOS users, Feedly is one of the best looking and feeling apps around. One of the strongest features going for Feedly is how well it is fed into by other services (see what I did there?). Within the app you can tie in Pocket, Instapaper, and for sharing ease even bit.ly all through setting preferences. In a similar manner, you can customize how you see feeds, going from tile to list formats and anything between in a breeze. Where it does falter a bit though is that each feed view has to be adjusted manually. At any rate, it’s certainly worth the pricetag- free. 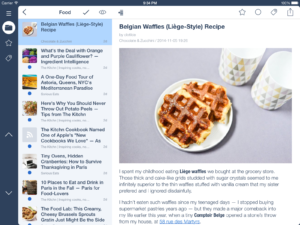 Inoreader is a great RSS reader for both professionals who use RSS to keep up to date on their trade as well as people who simply enjoy keeping up to date on news. While this does offer your standard RSS feed system in an unassuming way, Inoreader has some added benefits like a discovery section full of curated collections that can be extremely handy if you want to get up to speed on a new topic without knowing where to start. In case you tend to go head first with information, Inoreader also features a section where you can implement “rules” that can tag and organize articles in a way that makes sure that you don’t get flooded. The UI is easy to navigate and the iOS app is heavily reliant on the original webpage based design. In terms of issues, Inoreader isn’t great in terms of handling new addresses, and the social features that the app has isn’t too great, but isn’t intrusive. Overall, it’s handy for most people who want an RSS reader. 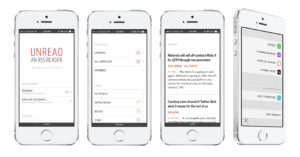 Coming in as runner up to the best RSS reader for apple products, Unread is a neat little app that has a lot going for it. First up is the unconventional black on red layout which gives it a more popping appearance (unless you are like myself and red-green colorblind). Focusing on simple and unobtrusive design elements when it comes to presenting stories, it can occasionally falter when displaying a story properly. However, I was able to overlook this for the more intuitive gesture controls it offers and the easy theme switching options. It’s a lot like other readers on this list, but also has plenty of surprise features for those that want to explore the app a bit more, making it a winner in my book. 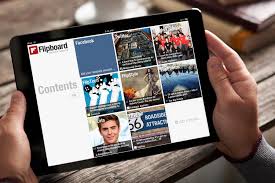 Taking the title for the best iOS RSS reading app is Flipboard, which has often earned the title of King of RSS for apple products. Featuring the classic newspaper style layout and strong ties to actual publishers (instead of just relying on RSS feeds alone), there’s a good chance you’ll get the news sooner than other RSS apps. Social networking is super easy with Flipboard with sharing options that are abundant. One hang-up is that there is no offline reading options, which can be bad for train commutes which don’t happen to have Wi-Fi. The feather in the cap for this RSS app is that it has a daily edition of curated articles which has a neat song and gif of the day feature which can make for a fun end to your reading, especially if it’s otherwise highly technical data.