Ashtae Products Update- What Happened After The Profit

Ashtae Products Before The Profit

Almost 23 years ago, Ramona and Michael Woods launched a line of multicultural and ethnic hair care products that they called AshTae Products. They are based in Greensboro North Carolina, and they host a total of 29 different hair care items. Instead of the consumer, ask a focused on getting their products out to local salons and beauty schools in the North Carolina region. Eventually, their sales grew to over the one million-dollar mark. As the Bennett business started growing, the couple’s daughter Taylore jumped in to help.

Unfortunately, not all is well with the business. They are spending money as quickly as they are making it. Instead of investing the profit back into the original business, Michael Woods likes to play around with side projects that end up losing the family money in the long run. Most recently, he’s been working on an app for the salon, but his lack of focus Ashtae is causing conflict with his family and preventing their business from expanding into new markets. Marcus was willing to help them get their focus back and to take some of the problems off of Ramona’s plate before she burns out.

Ashtae Products on The Profit 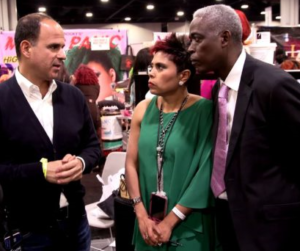 When Marcus pulled up to the address, he was having a difficulty actually locating the business. The building was huge, and there is no clear entrance for him to go into. He just chose one and went for it. He introduced himself to Ramona and Taylore, who told him that the rented out space in the building to barbershops and salons. Marcus asked if they owned all of the businesses, but they explained that they just on the building. Ramona started to say something about her husband, but he walked up at that moment. Michael Woods was wearing a suit, and you could tell that Marcus was impressed. Michael told Marcus that he dresses like that every day, and Marcus let them know that he looked like 1 million bucks.

Marcus discovered that Taylore didn’t have an official title in the business. Ramona admitted that Taylore was still trying to decide if she was going to work in the family business or not because she was frustrated with actually not being able to implement things or have any real deciding power. She told Marcus that all of the computers in the business need to be updated. Michael immediately said that they didn’t invest in next day technology. Marcus looks confused and asked him if computers were all that futuristic. Michael denied it, and Taylore told Marcus that it was always an argument.

Marcus asked to see the products. They brought him to another room where all of the products were laid out on the table. He asked what was special about the products, and Ramona told him that they had a special formula that was good for ethnic hair. When Marcus asked how they develop that formula, Ramona told him that they started sending it to salons and they would get feedback. They took the feedback, and fix the problem and the product in real time. The products were all in plain looking white bottles. Marcus asked if they like the packaging, and Michael immediately jumped in to say that he did. Taylor told him that she didn’t feel like the bottles signal to the customer that what they were buying was not an upscale product. She would change the packaging and the logo. Marcus told them that it looked like a wholesale line, not something for consumers. He would change it since salons have so many other products to choose from.

Marcus asked the family to take him on a tour of the facility. He noticed that the building was filled with other beauty salons, and accounting office, as well as a ballroom. They rent out the space to make more money. Marcus did not look impressed. He thought it looked too busy. They also had a church in the space, as well as a dance studio and a bail bondsman. Marcus compared it to Michael owning his own city. He asked him how much it cost to rent. Michael told him it cost $1.9 million to rent. Michael said that it was a passion that he had to help other businesses to get started.

Marcus thought that everything was too much of a distraction to his original business. He worried about where his focus was going to be as a potential investor.  Next, he saw the facility where the products were mixed. He discovered that Ashtae Products has a co-packer. Marcus wondered why the co-packer wasn’t the person who combined all the products. Michael stated that their volume wasn’t large enough for co-packer to do their products from start to finish.

Marcus found out that Michael wanted to get a full full-fledged factory. He had dreams of becoming a co-packer for other people, as well as producing the Ashtae Products. Marcus said that he wasn’t sure that Michael had ever been to a co-packer both facility before to see how complicated the whole process was. It wasn’t as simple as just creating the product for a company. Marcus then took a look at Ramona’s desk. It looked like a hurricane hit it. When he asked what she called it, she said that she called it multitasking. She took care of all the financials as well as payroll. You could see that she was stressed out. She was also setting up the trade shows, and collecting the receivables from the customers. Michael came up in the middle of the discussion to add more to Ramona’s plate.

Next, Marcus was shown the failed television studio that Michaels tried to start. Michael tried to tell Marcus that it only cost $200,000 to do, but both his wife and his daughter interrupted him. It was clear he didn’t think things through. He didn’t account for the payroll, and all of the equipment that was going into the television station. Marcus was starting to look overwhelmed. Michael is claiming that he had failed at very few things. He said that everything he did had an upward trajectory. He had admitted that mistakes were made, but insisted that they were on their way to a multimillion dollar venture. His daughter legitimately looks like she wanted to hit him.

Marcus sat down with Taylor to get her perspective on everything. She expressed her frustration at not being able to implement any of her ideas. Taylor expressed her desire to be the chief operating officer, but she hasn’t sat down with her parents yet to talk about it. Marcus Sunset with Ramona and discovered that all the profit from ashtray went to fund Michael’s silly ideas. Ramona started getting emotional talking about it. She said that all the money that they ever saved went into funding those ideas. She said she loved her husband but she was getting tired of carrying all of the pressure.

Marcus then went over the financials with the business owners. He discovered that there was $60,000 in cash in the bank, but $90,000 in debt between credit cards and payables. He told Michael that even though they had exceeded $1 million in revenue the last year, they were still in debt because they were trying to fund all of Michael’s crazy ideas. He didn’t disagree with that. Marcus shook hands with everybody, and said that he wanted to look over the receivables a bit more before he made a decision to invest in the business. He met with Ramona and Michael after a bit. Michael said that the business probably needed $500,000 in investment for opportunities to come in the future. Marcus offered them $200,000 in exchange for 25% of the business. He would use that money to pay down the debt, and then the rest would go towards cash flow to get them cash positive.

Michael was trying to argue with Marcus to get more money. Marcus told him that he was just a checkbook, then he was the wrong investor. Ramona told Marcus that she was looking for $300,000 because she had felt the tightness for so long. She wanted more of a cushion as reassurance. Marcus said that he was willing to do the 300,000 for 25%, but he wanted permission from both of them to find extra cash wherever he could. Michael agreed, and all three of them shook on it.

Marcus met with all of the employees, and told them that the process would be changing. He told them that there’d be focus going into the company. He told all of them that they would no longer be bottling in the building, they would be looking at the branding, and focusing on attracting more customers. Marcus went on a sales call with Michael, to see how Michael landed customers. Marcus discovered that the salon that they were visiting was waiting on product for Michael. The salon owners told Marcus that there are people waiting and waiting for the products. Michael tried to say that obviously they sold well, but Marcus point out that there was a distribution problem. Michael need to understand the sales history. Michael discovered that one of the chairs in the salon had been duct taped so he decided to take it with them. Marcus used it as proof of his lack of focus.

Marcus then arranged the meeting with Taylore and her parents. She had written a list of things that she need to be employed with the company. She expressed her desire to become chief operations officer. Marcus gave the responsibility of the upcoming tradeshow to Taylore. It would let her show her parents that she was ready to take on more challenges.

When all is said and done, Marcus helped them get a co-packer to do all of their bottles of product from start to finish. He got them new packaging that looked professional enough to sell to the consumers. He went through all of the building to find things to throw out and sell. Michael had a hard time with it, wanting to hold onto things like he was a hoarder. They were able to raise $23,000 by selling off things in the warehouse. That money went back into beautifying Ashtae Products. The tradeshow did not go as planned, as the new bottles were not ready, and Taylor did not do her best on the booth. But none of that mattered. Michael was in his element, and charmed the crap out of the crowd.

Ashtae Products Now in 2018 – The After ‘The Profit’ Update 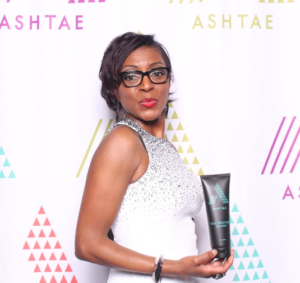 Since appearing on the Profit, Ashtae Products has had a relaunch party that included cocktails, food, and fun. There are photos of the Woods family and Marcus partying and displaying their gorgeous new packaging for their retail line. Those consumer products are available on the Ashtae Products website, which you can find by clicking here. According to an update by CNBC, they have been accumulating new orders and opportunities since their episode ran. The hair care company was able to hire new people, and they have a 4.8 star rating out of 89 reviews on their official Facebook page.