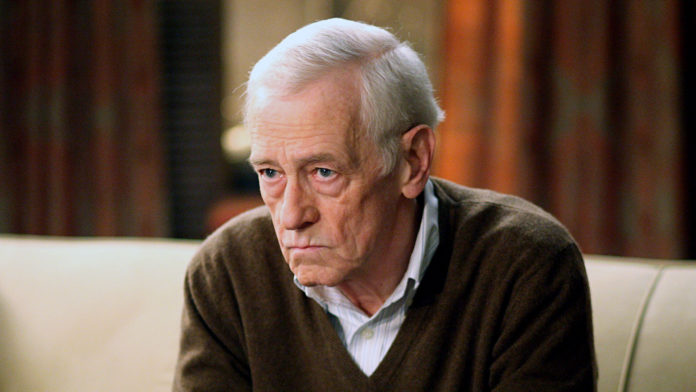 Continuing on from yesterday’s look at David Hyde Pierce we land on John Mahoney, an excellent performer from the UK who played Martin Crane, the loving, yet cantankerous, father of Frasier. He was the foil to both Niles and Frasier, and a combination of acting talent and comedy chops allowed him to steal a scene or two during his time on the show. He has been acting for decades, first on the stage before jobbing around a few TV shows. His most enduring role to date is still Frasier, but as I am so fond of pointing out, a popular sitcom is an excellent long term investment for any actor. Not only do you rake in cash hand over fist, on a per episode basis, but so long as the show continues to make money on syndication, you get a fat wad of cash every month too, not a bad deal. Mahoney these days still pops up, he appears on another moderately popular show right now, and has been acting on stage consistently every since Frasier went off the air.

So let’s take a look back, see how this actor made his money.

How Did John Mahoney Make His Money & Wealth? 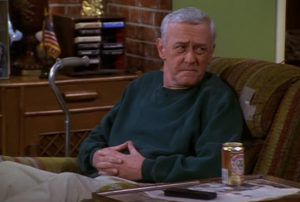 John Mahoney was born on the 20th of June 1940 in Blackpool England. His family lived in Manchester during the Blitz, and were relocated to Blackpool to avoid the bombs. His father was Ireland born though, and worked as a baker. He did not have the best home life, and while still young, vowed to leave Manchester the first chance he got. His older sister, Vera, married an American, called a War Bride apparently, and she sponsored him for residence back in the mid fifties. He lived in Illinois for a while, and attended Quincy University. He joined the army not long after, in order to spur on his citizenship. He got out in the early seventies, and pursued a career as a teacher, but was soon restless.He took acting lessons at the St Nicolas Theater, where he met John Malkovich, who encouraged him to join The Steppenwolf Theater.

His time with the Steppenwolf Theater was a major success, and not long after joining he played in Orphans, which won him a Clarence Derwent Award. This soon spring boarded into Broadway performances, where we would win a Tony for The House of Blue Leaves. Success on the stage soon led to Hollywood, and by the mid eighties John Mahoney was appearing in films.Mahoney had a consistent 30 year film career, running from 1982 to 2010, and he still hasn’t ruled out future film work. He appeared in a number of Coen Brother’s films, Barton Fink and The Hudsucker Proxy, both critically acclaimed works.

So well known were his talents that when the producers of Cheers were looking for someone to play the newly created character of Frasier’s father for the spin off show he was pre approved for the role. John Mahoney appeared in 263 episodes of Frasier over eleven seasons, and knocked it out of the park. He played a down to earth ex-cop, injured in the line of duty, who has to come to terms not only with the fundamental differences between himself and his children, but also his own growing frailty. I make it sound all dramatic, but this was a sitcom. Still, Mahoney brought the open hearted sincerity when it was needed, and upon occasions his performance really tugged at the heartstrings.

During the early days of the show’s run Mahoney was likely puling in only a little more than the female leads on the show, both Gilpin and Leeves made less than their male counterparts, so we are looking at a few tens of thousands starting out. By the eighth season he was pulling in $700,000 per episode, and by the eleventh season he was hitting $975,000 per episode, a mite shy of that coveted $1 million dollar make. Still, far from bad. Bear in mind that sitcom stars get a check every month for syndication, and considering that I last watched the show through about a month ago, I imagine Frasier is still pulling in a hefty sum each month.

Mahoney’s career has slowed in recent years, but he still acts on TV every now and then. It has been seven years since his last film role.

He is not. There are all kinds of rumors about John Mahoney. He claims to have dated privately, but is not interested in marriage. I have looked into this, and the two that crop up more often that most are the story about his groin injury, leading to erective dysfunction. The other claims that he is gay. Now, Frasier was one of the gayest shows on television, with David Hyde Pierce, Dan Butler and several of the writers being gay, but I cannot find concrete evidence one way or the other for John Mahoney.

Where is John Mahoney from?

John Mahoney is from the UK. Blackpool/Manchester first and foremost. He was born in Blackpool due to his family being relocated during the Nazi bombing of Manchester. He moved to the US while still a young man and joined the Military to fast track his citizenship. He is a US citizen, and lost his British accent while enlisted.

Was John Mahoney on Cheers before starring on Frasier?


Yeah, pretty much everyone on Frasier appeared in Cheers in a different role. Mahoney played a jingle writer and pianist in an episode. Haven’t reached it in my current wacth through yet, but I am looking forward to seeing him.

He did. Lovely little reference from The Simpsons guys. Kelsey Grammer plays both Frasier and Sideshow Bob, David Hyde Pierce played both Niles and Cecil and John Mahoney played Marty and Robert. Not a great episode, but that made me laugh. He had a vaguely trans-Atlantic accent on the show, so it isn’t immediately obvious.