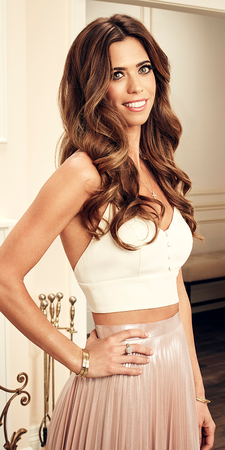 The wildly successful reality TV franchise Real Housewives revolves around the wives of rich businessmen living in the country’s trendiest cities. These women are far from arm candy, however – many of them have built multiple multi-million dollar businesses. Lydia McLaughlin is possible one of the most successful women on the show. She has built three businesses by herself. Lydia and her husband Doug are currently building a fourth business.

The success of RHOC has made her already successful businesses even more popular. She is currently managing SKYLAB media, a luxury marketing firm created with her husband. Lydia McLaughlin owns an art gallery, a jewelry company, and two magazines.

How Did Lydia McLaughlin Earn her Money and Wealth?

Lydia McLaughlin was born in Canada on March 10th, 1981. She is the granddaughter of Geoffrey William Stirling, the founder of Stirling Communications international. Stirling international is Canada’s largest 24 hour radio station. Geoffrey Stirling has a net worth of 100 million. Despite his wealth, Geoffrey Stirling made sure his family inherited his work ethic along with his wealth.

Shortly after her birth, Lydia McLaughlin’s family moved to LA Jolla, California. Lydia has described her parents as “hippies”, as they spent many years traveling in obscure countries in her youth. She graduated La Jolla public high school and attended the University of San Diego after graduating. While attending USD, she lived in mission Beach. Lydia was also a member of the Alpha Phi sorority.

After graduating from the University of San Diego, Lydia McLaughlin immediately got to work. She launched the jewelry company Lydia M designs. She also worked for her grandfather’s company. Even while she was busy nearly all the time, she still made a point of never missing church. Lydia met her husband Doug at her church,

In 2006, Lydia McLaughlin married her husband Doug. The pair are still married, and often collaborate on business ventures. They founded Beverly Hills Life Magazine together. Doug later left management of the magazine to Lydia so he could focus on Skylab media.

Lydia McLaughlin first appeared in Real Housewives of Orange County in 2013. She instantly became a hit with viewers for her work ethic and easygoing personality. Viewers often remarked that her drama-free personality was a breath of fresh air. However, she left after just one season due to the stress. Lydia appeared on the show again in 2017.

It is currently not known if Lydia McLaughlin will appear again on Real Housewives of Orange County. Her hands are quite full for now. Even when Lydia is managing her businesses, she’s still a full time mom. She is also a writer. Her first book, Beyond Orange County, was published in 2014.

Lydia McLaughlin married her husband Doug in 2006. They have three children, Stirling (8 years old), Maverick (6 years old), and Roman (3 years old). Doug and Lydia have been married over a decade now. They travel the world with their three children. The pair lives in Spanish style mansion in Laguna Beach.

Lydia and Doug McLaughlin donate roughly 20% of their income to charity every year. Before marrying Doug, Lydia donated over 50% of her income every year. They mostly donate to charities for those in need in the Laguna Beach area.