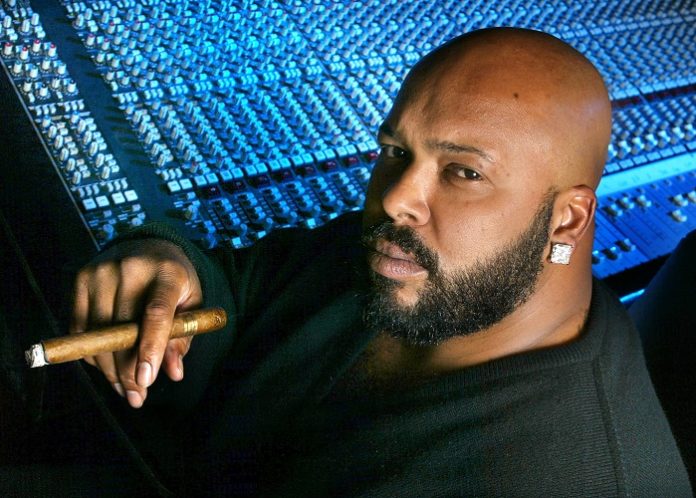 Suge Knight, he’s big, he’s bad and he’s the former boss of Death Row Records, one of the most influential rap record labels of all time. He knows more about the death of the late great Tupac Shakur, the most legendary rapper of all time, than anyone else alive, and in typically controversial Suge Knight fashion he’s still claiming from time to time that Tupac is still alive, having faked his death and fled to Cuba to live a life out of the spotlight.

Suge Knight has led a life filled with controversy, beef with artists and plenty of brushes with the law, but as the co-founder of Death Row Records he once had millions of dollars under his control on a daily basis, yet now in 2018, facing serious jail time for a 2015 hit-and-run murder of which he is accused, Suge’s fortune is just a fraction compared to the riches that he once had. But exactly how much is Suge worth now? What’s the story behind his claims that Tupac is still alive? And what’s likely to happen in his upcoming legal case? Read on to find out.

How Did Suge Knight Make His Money & Wealth?

Marion Hugh Knight Jr. was born on April 19th 1965 in Compton, California to parents Marion Sr. and Maxine. He grew up on the tough streets of Compton and went to Lynwood High School, where he excelled in both track and football. The name Suge came from a childhood nickname, derived from ‘Sugar Bear’, and by the time Suge graduated from high school in 1983 he had indeed grown to be bear like. Suge was six foot two and over 260 pounds, he continued to play football while attending El Camino College on a football scolarship from 1983 to 1985, and after that he moved to Las Vegas and the University of Nevada where he continued to work on his early ambition of playing football professionally. While playing at the UNLV Suge won the Rookie of the Year and was elected defensive captain. He also occasionally earned extra money as a bouncer for the Cotton Club in Las Vegas.

Suge was unable to get a place in an NFL team after college, but he was given a place in the Los Angeles Rams training camp. Unfortunately even though he showed plenty of promise in sports, Suge wasn’t quite good enough to get a place on the team, although with the advent of the 1987 NFL players strike he did get the opportunity to play two games for the team as a ‘replacement’ player. After the strike, with no prospect of playing again for the Rams in sight, Suge worked for a while as a bodyguard for various celebrities, including the artist Bobby Brown, and he also began promoting concerts.

All who have met Suge agree that his ability to recognize talent borders on genius. His ability to see the potential in artists is the stuff of legend in music management, a legend he forged during the seminal rap scene of the early 1990’s. He formed a music publishing business and his first big break in the business came in typically controversial style. Suge ‘persuaded’ an artist called Robert Van Winkle, better known professionally as Vanilla Ice, the artist behind that huge hit of the time ‘Ice Ice Baby’ to sign royalties from the track over to him. The exact details of that ‘persuasion’ are unclear. It’s rumoured that Suge dangled Ice over the balcony of his Las Vegas hotel room, but Ice insists that Suge ‘only’ threatened to do so. Either way, after their unexpected business meeting on the balcony, the final result was that royalties from the muilti-million selling hit were signed over to Suge, a deal that earned him a reputed $20 million dollars over time.

Suge launched an artist management company next, and quickly signed up West Coast rappers DJ Quik and long-time NWA collaborator D.O.C. After D.O.C.’s almost fatal car-accident in 1991 Suge took D.O.C.’s mother to visit him in hospital during his long recovery. D.O.C. and Dr Dre both wished to leave NWA and the Eazy-E run label Ruthless Records, but Eazy-E was reluctant to release them from their contract. According to Jerry Heller, NWA’s manager at the time, the conflict was resolved by another bit of persuasion from Suge Knight, this time carried out through some threats involving baseball bats and lead pipes, which again resulted in Suge Knight achieving his desired result.

At one stage during the mid 1990’s Suge’s personal wealth was measured in the hundreds of millions, he was involved with a car hydraulics company and helped fund and launch the Las Vegas nightclub ‘662’. Suge made several charitable contributions to community causes at the time but the federal authorities had anything but a charitable opinion of Suge Knight and Death Row Records. At that time the FBI considered Death Row to be nothing more than a criminal enterprise, and suspected that much of the money running through the company was the result of drug trafficking and money laundering. Sales worth over $150 million were achieved, and in 1995 Suge signed Tupac Shakur after offering to post the artist’s $1.4 million bail if Tupac agreed to come over to the Death Row label.

Tupac and Death Row released the double album ‘All Eyez on Me’ in 1996 and the singles ‘How Do U Want it’ and ‘California Love’, Tupac also collaborated with another Death Row artist, the massively successful M.C.Hammer and the label released several singles, the most successful of which was the platinum selling ‘Too Late Playa’, with Danny Boy and Big Daddy Kane. But the night of September 7th, 1996 saw one of the most shocking events in the long and often violent history of Suge Knight and Death Row Records, with the Las Vegas drive-by shooting death of Tupac Shakur.

Tupac and Suge Knight had been at the Mike Tyson vs. Bruce Sheldon boxing match at the MGM Grand in Vegas earlier in the evening, they were proceeding to Club 662 when a Cadillac drew up alongside Suge Knight’s car and opened fire. Tupac died six days later on September 13th 1996. Some theorized that Suge had been behind the murder, as Tupac was planning to leave Death Row Records, but others pointed out that Suge would never put himself in the line of fire, after all anyone could have been hit in such a chaotic situation. Suge later suggested that he himself may have been the intended target, but the speculation about what really happened that night is now in 2018 more intense and sensational than it has ever been.

In the years since Tupac Shakur’s death Suge has claimed that Tupac faked his own death in order to escape the limelight and threats from his own connections with gangs, there have also been reports that Suge has identified Tupac’s killers, reportedly admitting that the head of security for Death Row Records was one of the responsible parties. The real story behind Tupac’s slaying will probably never be known, but the eventual effect on Suge Knight was catastrophic for him and Death Row Records.

After the killing of Biggie Smalls in Los Angeles in March 1997 Suge Knight surrounded himself with bodyguards, who were usually armed. This was a violation of the conditions of his parole, and in February 1997 he was given a nine year sentence for the violation. Dr Dre left Death Row at about the same time, as he was displeased with Suge’s ever more violent reputation and thuggish behavior, and Snoop Dogg also left Death Row shortly after. Suge eventually remained in jail until 2001, during which time Death Row was driven into the ground through poor management and financial irregularities. In April 2006 Suge filed for bankruptcy after being ordered to pay $107 million to Lydia Harris who had been cheated out of a 50% stake in the business. Now in 2018 Suge Knight, who once had hundreds of millions at his disposal is reduced to a personal bank balance of just $200,000, but it’s possible that he won’t ever get to spend any of that relatively small sum as a free man, because these days Suge Knight is facing his most serious charges to date.

How Did Suge Knight Make His Money & Wealth?

Suge Knight has married twice, firstly to Sharitha Golden with whom he had a daughter, and in 1999 he married the R&B singer and Death Row Records artist Michel’le. Michel’le had previously been engaged to Dr Dre and had a son with him. In 2002 Suge and Michel’le had a daughter Bailei but the couple divorced at about the time Suge was filing for bankruptcy.

What is Happening With Suge Knight’s Criminal Case?

Suge Knight was involved in a hit-and-run in Compton, California in January 2015. He ran over Terry Carter, who was a co-founder of Heavyweight Records and also a friend of Suge Knight. Video footage of the event soon made it onto the internet, it clearly shows Suge running over Terry Carter, but doesn’t clearly show what happened before Suge’s car began to move. Suge claims he was attacked and was fleeing for his life, he intends to claim self-defense, and in the two years since Carter’s death he has frequently butted heads with judges. Suge has been beset by medical problems caused by blood-clots, a condition he has suffered from for years during preliminary hearings, and has been unable to raise bail and remains incarcerated to this day. Suge did manage to get his bail amount lowered from $25 million to $10 million in 2015, but even the lower amount is beyond his reach at the moment. On April 6th 2017 a judge finally set a start date for his trial of January 8th 2018, declaring that the case must be heard then, regardless of Suge’s medical condition.

The life of Suge Knight has been peppered with violence, intimidation and frequent brushes with the law, but few who have met him doubt his ability to recognize a future best-selling artist. His intuition with unknown artists has brought us many celebrated and critically acclaimed artists, perhaps most notably Snoop Dogg, and Suge’s feel for the music business has been described by many who knew him as bordering on genius. The creation of Death Row Records has become one of the seminal moments in the huge popularity that rap music enjoys today, and Suge Knight has become almost a mythical figure to fans of the genre.

Suge Knight’s eventful and unusual life has been the subject of numerous documentaries about the early days of rap music, and his involvement with Tupar Shakur has guaranteed that every word he says about the most popular rapper of all time is considered and analyzed. Suge has been portrayed in a number of films, parhaps most notably in the biography of Biggie Smalls, ‘Notorious’ which was released in 2009. He was portrayed most recently in 2015 in ‘Straight Outta Compton’, the biography of N.W.A who are considered by many to be the most influential rap group of all time. No matter what the result of Suge Knight’s upcoming trial is, his influence on the greatest rap artists of all time, and his contribution to the popularity of the genre, cannot be underestimated.