Windward Boardshop Update – What Happened After The Profit

Windward Boardshop Before The Profit

A Windward board shop was started in 2010 when a group of friends bought the company from someone else. Chris, Tony, and Jess went in on it together. The store was already 30 years established with a real history. It had a reputation for being the go to store for snowboarding and skateboarding equipment. They updated the store and introduced new brands. They completely renovated the building. They change the name as well. While it’s good to have something new, it also took away all of the past of the business – both good and bad. While Windward Boardshop was off to a good start, they decided to open up another store in an affluent part of Chicago. The new store has been failing, and they no longer were maintaining a profit. They are struggling to keep inventory in both stores. Marcus concluded he wanted to help.

Marcus recognizes that active sports are a growing industry. He believes that the store’s history should lead it to profitability. He believed that the competition should be no big deal. He decided to visit the store and see for himself if it would make a reliable investment.

Windward Boardshop on The Profit 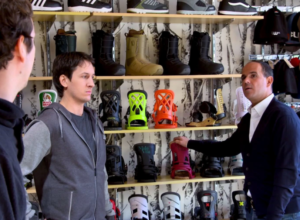 Marcus entered the shop and introduced himself to Jess and Chris. He told the two owners that he’d seen the store many times in the past 20 years since he lived in the Chicago area. Chris said that they’d owned the place for about six years now. Marcus asked if it was a snowboarding shop, as he saw snowboarding gear on the wall. Chris told him that he could think of it as a snowboarding shop in the winter, and a skateboarding shop in the summer. Marcus marveled over a stand-up paddle board, wondering how he would get it to the beach on his VW beetle. Jess interjected, telling him that they’ve done it before.

Marcus had only been there for a little bit, but he already had a criticism. The paddle boards were taking up a lot of space and didn’t provide enough margin. He believes that the store overall should have about a 50% margin, and here are these big hulking things that took up a lot of space, and were only providing the 30%. He thought space could be better used. Next, Tony came up and introduced himself to Marcus, stating that he was in charge of IT, as well as inventory management. Jess managed the new location. Chris said that he ran the overall arc of the business.

Marcus had a tour of the business. There is a large men’s side and a little side for women’s products. Chris said that he didn’t stock much because it was only 10% of their sales, and Marcus inquired if that was a self-fulfilling prophecy. An aside to the camera, Marcus said that as a business owner he knew that females drive over 50% of transactions in the general market place. He thought it was telling that Windward Boardshop was not catering to that demographic. He felt like this store should represent that portion of the market.

Marcus discovered that they didn’t have working capital to buy boards that would sell, but when he looked around, he could see that there is a lot of apparel on the shelves. Marcus thought that it was possible that they were buying the wrong kind of stuff. Marcus walked around and met the rest of the employees. He met an employee named Cody, who was packing things to ship out. Cody was confrontational, accusing Marcus of just being about the dollar and not worrying about the authenticity of their brand. He was worried that they were just going to change into some big chain store. Marcus and an aside to the camera said that he saw Cody’s passion. He admired that but was afraid that he would be difficult to work with.

And next, Marcus went to the Highland Park location to check things out. He discovered that the store was empty. He asked the owners to walk him through how they decided to pick that place. Chris said that that proximity to the lakefront and a more affluent customer number made him decide to choose Highland Park. You could tell that Marcus was not a fan of them having chosen the location due to paddle boards, due to the small margins Marcus said that money and water were not a good reason to open a new location of the specialty store. The area where they began was a haven for older people with money, not young hipsters.

Marcus asked how much revenue the new Highland Park location produces. Chris told him that it made $350,000 in revenue each year at a 35% margin. That was a total profit of hundred thousand dollars. That didn’t take into account expenses such as rent and utilities. Since rent was $13,000, and they were only bringing in $10,000 a month, they are losing money before they paid for anything else. Marcus asked where the money came from for that store, and for the location, and discovered that they’d gotten an SBA loan of $359,000. Jess stated that she wished she knew more about the store before she agreed to a second location. Chris and Tony knew that the site had already been picked out, but they did not enlighten Jess to this fact.

Marcus met with each owner individually and found out that Jess’s equity in the business had actually gone down because she’d gotten pregnant, and couldn’t put as much time into the firm anymore. Marcus described the action that Chris had taken as disrespectful. In his meeting, Chris told him that his father wanted him to purchase the business before passing away. Chris felt like if the business failed, then he was ultimately failing his father.

Marcus dug deeper into the financials of the business. He found out that they had no extra working capital and a location that was sucking the life out of Windward Boardshop. Marcus informed Jess about the financials, and she expressed that she felt like she was out of the loop. She also felt like she was told that she could not have a family within the first five years, and she never agreed to that.

Marcus offered the three of them $500,000 in exchange for 50% of the business. Chris asked for more money for less equity. Marcus said that he couldn’t go lower. He agreed to add $100,000 more if they liquated the inventory that they didn’t need. All of them shook on it, and they explained the deal to the employees. Marcus announced his plan to pay off the debt, and provide the working capital. He also wanted to grow a number of active sports that they serviced, and he was planning on changing the name.

Marcus discovered that he did not like the way that Chris made decisions. He did not appear to think things through completely.  Marcus told Chris that he didn’t think Windward Boardshop would’ve needed to call him if it were not for the ill advised location. Chris tried to say that they’d bitten off more than they could chew, but Marcus did not have it. He wanted Chris to own his mistake.

The first thing Marcus did was close down the location that was bleeding money. As Chris and Tony were taking down things from the shelves to sell at the original spot, they started blaming Jess for the failure of the Highpoint location. Marcus overheard them, and let them know that Jess had nothing to do with picking the location. Jess was very upset about the closure of the store. She was worried about her staff. Marcus thought it was indicative of her passion, and he thought it was a good sign.

Marcus had them revamp the basement to fix the inventory process and turn the rest of it into a retail space. Marcus had Jess leading the liquidation process, and he was impressed by her knowledge and leadership. Marcus and the team reinvented the store as “W82”, which incorporated the Windward name with the year that the business opened. They then went through the inventory and got rid of items that did not have the correct margins. Marcus then discussed adding new products that would actually sell. He received some kickback from the staff, but ultimately it was his word that went.

They closed Windward Boardshop to do a total revamp of the space. There would be separate departments for each sport. Marcus decided that Jess would be the buyer for the company. Chris put up a bit of a fight but recognized that Jess did a great job, and relinquished his control. Marcus decided to give up some of his equity to give all of the owners more – Chris got 30%, Tony got 20%, and Jess went back up to 10%. In the end, the store looked entirely different. Everything looked clean and well organized. Let’s take a look out how they did once Marcus took a step back.

Windward Boardshop Now in 2018 – The After ‘The Profit’ Update 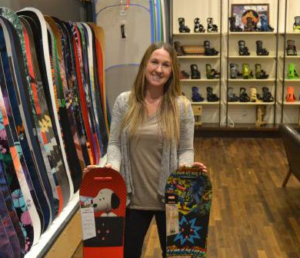 The grand reopening of Windward Boardshop, now W82, went very well. Lots of people showed up, including Chris’ mother. The employees and the owners were very pleased with how everything turned out. They also have a thriving shop on Amazon that has mostly positive reviews. Marcus is using the new W82 website to sell another of his investments – Inkkas Shoes. He purchased the building that the Highland Park location was in, and put one of his other companies in it. In late August of 2017, Windward Boardship announced their decision to partner with Snowboarder Magazine. They also keep their Facebook page updated with sales and new products that they acquire. The best part of their social media marketing is their videos of the staff involved in the activities they promote.