The Dugout Sports Bar and Grill on Bar Rescue 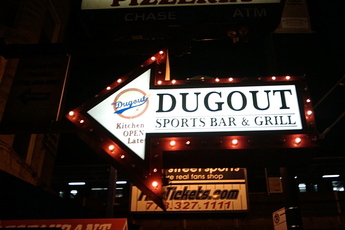 The Dugout Sports Bar and Grill Before Bar Rescue

In July, 2011, after months of not receiving rent, landlord Ed Cressy was forced to evict the tenant operating The Dugout and take it over. Sadly, it was not Ed’s life dream to own or run a bar, and he can think of 100 things he would rather do than run a bar. Unlike most bars, The Dugout experiences two seasons. The first is Cub season, where they’re packed door to door and everything is great. The minute the last game of the season is over, The Dugout becomes as empty as the seats of Wrigley Field. Everyone quit after the season last year, bartender Emily said. She felt like the job was her life, and that’s not her job to take after Ed. However, she does meet the most amazing people there, and that’s what keeps her coming back to work.

Once the season ends, cabin fever sets in, and tempers rise among staff and the owner. As strain within the workplace grows from nonexistent customers, Ed’s lack of experience and desires causes the bar to further deteriorate. Every time the staff needs Ed, he’s nowhere to be found. As an attempt to draw in customers, Ed creates random promotional products and brash gimmicks, such as the “hot pussy.” It’s his signature shot, and all the bartenders think it’s disgusting.

While his aimless efforts to draw in customers fall short, the bar has fallen into further disarray. Once upon a time, Emily wanted to fix the bar and she had a lot of ideas that could have caused the bar to be respected. However, Ed writes this off as the fact she’s a 22 year old girl who has never been out of Illinois. If things don’t change soon, The Dugout may be marked as an overall loss in what could be their final season. This past off-season, they were more than $30,000 in debt and losing $5,000 a month. Ed has an amazing opportunity to make the bar special, but Ed doesn’t want it. If things don’t change and Ed gets “another prick of a tenant,” then he’s stuck in the same position. Ed has called in to Bar Rescue, and more importantly Jon Taffer, to step up and swing a home run.

The Dugout Sports Bar and Grill on Bar Rescue

In Chicago, Illinois, not far from Wrigley Field, Jon pulls up to The Dugout Sports Bar and Grill. He explains that in this block alone, there are 13 bars, and the neighborhood is all about the Chicago Cubs. The Red Line is 300 feet from the front door of the bar, where 3 million people a year use to the train to get downtown solely for the baseball game. Jon has brought in expert mixologist Phil Wills for the bar, and expert chef Ryan Scott. Of course, the three take a detour to pass by Wrigley Field.

Finally arriving to The Dugout Sports Bar and Grill, the front of the bar is totally unimpressive. The pizza place and T-shirt shop jump out more than the bar does. Inside the bar, the staff is fighting among each other, of course. Emily and Ed are having a blowout fight about hiring a manager and running the business properly. Ed insists that he works 15 hours a day at the bar, but the entire staff looks exasperated and exhausted from the nonsensical argument. The car with three experts themselves look annoyed, and Jon says that it’s a wonderful way to start the evening.

Inside The Dugout Sports Bar and Grill, it does not look like a sports bar – more like somebody’s basement. It looks like they threw things together and invited people in. To make things worse, wires are exposed hanging from every television set, computer, and electronic device. Ed sits at the bar, looking bored out of his mind. Jon explains that Ed had a tenant who didn’t pay the bar so Ed had to take the bar back. He’s had the bar for 5 years, and currently losing $4,000 to $5,000 per offseason. Even during the baseball season, the profits of The Dugout are nothing impressive. All in all, Ed makes no money.

Bartender Scarlett explains that the bar does not have any glass because when games air in the bar, the crowd can get rowdy. In the kitchen, Ed starts to prepare food, and Emily seems surprised that he’s cooking. Jon then mentions that just a few moments ago, the two were screaming at each other, and now they’re cooperating just fine. They run so hot and cold. Jon then reveals his recon plan; he has Gordon Wittenmeyer and his son. Gordon is a sports writer for the Chicago Sun, so Jon thinks he’s the perfect candidate to perform recon. 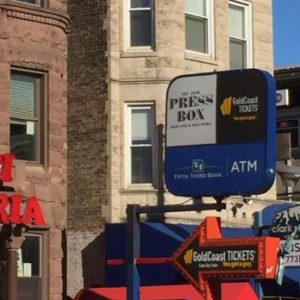 Jon’s spies then enter the 1,200 square foot subterranean bar with two nondescript entrances located on the front and side of the building. Inside, an L-shaped bar completes the ensemble, as well as the full kitchen, and a 99-person occupancy ties the package together. The two are greeted by bartender Scarlett, and they order a Long Island Iced Tea and a shandy drink. Of course, Gordon and his son point out the jug of the “Hot Pussy Shot,” to which Emily mocks and says that she’s never had because she’s allergic. Jon looks absolutely annoyed with the tasteless name of the drink.

The “Hot Pussy Shot” is made from four different types of bourbon, cinnamon, brown sugar, and habanero peppers. This is the type of stuff that is done in a college bar with 21-23 year old customers, not in a sports bar with a 40-year old customer in the room. Unfortunately, most of the menu is only available on game days (during the main season), so Gordon and his son order the mac and cheese bites (with a side of ranch, of course) and The Dugout Dog. In the kitchen, Ed is touching raw products with his bare hands, and smoke is rising out of the oil. The smoke is the food from the bottom of the fryer burning and coming up. Now, you can taste everything that’s been cooked.

Fruit flies also swarm throughout the bar, and the food takes a long time to come out. Ed continues to touch raw product without gloves or washing his hands, and even dips his hands right into the pickle juice. The entire jar of pickles is wasted. Jon has seen enough, and he sends his experts in to storm the kitchen and demand that Ed not serve the food he just prepared. The Bar Rescue gets off to a violent, unexpected start.

The Dugout Sports Bar and Grill After Bar Rescue – 2018 Update

This is one of the most polarizing episodes of Bar Rescue. The staff all walks out in the end segment, leaving Ed to perform a grand opening by himself. Ed sucks the life out of everything, Jon says. Every member of the staff has moved on, although for the scope of this article, The Dugout Sports Bar and Grill is still open in Chicago. It is known now as “The Press Box,” and has a much more attractive facade to grab people’s attention. The bar was closed and relocated to the upstairs pizzeria restaurant, and Ed still owns the building.

Oddly enough, The Press Box has a super high rating on Facebook and TripAdvisor, but not on Yelp. On TripAdvisor and Google, it has a 4.3 and a 4.4 star respectively, but on Yelp it features a lackluster 2.4 star review. Unfortunately, Ed saw it fit for the “Hot Pussy Shot” to make a return after Jon Taffer’s bar rescue attempt.