This episode of the Shark Tank started off with the ReThink audition video. Tricia Prabhu, a 16-year-old from Illinois, introduced herself as an ambitious person who loves aiming for number one. The tape showed her playing tennis and then flashed to a wall full of medals. The teenagers said that she had start coding when she was 10 and found out that was something she was passionate about. This led her to being named Google Science Fair Global Finalist and being invited to the White House. Before even appearing on Shark Tank, Tricia had given three Ted talks and had been recognized for her achievements by MIT.

In order to share her experience with others, Tricia started a series of classes called Girls Who Code. The video flashed to her if in front of a classroom filled with other teenage girls who were eagerly typing on their computers. Tricia stated that she believed in using technology for good, and she was focused on fixing a problem she believed technology created – cyber-bullying. 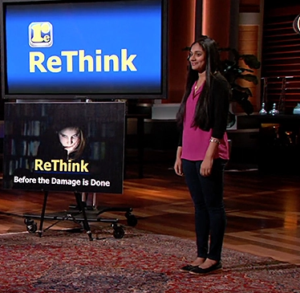 Tricia walked out onto the stage, and into the Shark Tank. She introduced herself confidently as the creator of ReThink. She requested $100,000 in exchange for 20% equity stake in her business. Tricia started off her presentation by telling the sharks that the show is seen its share of harsh comments. Some of the quotes she listed off were “You’re a zero, not a hero,” “You’re a cockroach!” and of course “You’re not an entrepreneur, you’re a want-trepreneur.” She told the sharks that if they thought the tank was bad, then they hadn’t been on the Internet yet. She describes cyberbullying as people using tormenting and humiliating words to bully others as they hid behind their computer screens.

Tricia insisted that cyberbullying was a pandemic that affected millions, and she was determined to stop it. Her app, ReThink, stops the hurtful words before they become a problem. She explained that that was able to detect an offensive message made by an adolescent, and it gives the person a second chance to reconsider what they wrote before sending it out into the world. A large display on the stage was set up to look like an iPhone screen.

It showed the phones regular messaging app as of fictional Joey asked Erica out to the dance. You could see that fake Erica initially typed “no you are so ugly”. The Sharks all made a surprised noise, while Tricia explained that there is no need to express the “no” in such a hurtful way. On the screen, a box popped up asking Erica if she really wanted to say that. You saw the offensive words being deleted off the screen, and then she retyped “that sweet but I’m sorry, I can’t.” Tricia said that Erica ultimately rethought her decision and made a better one. She claimed that both teens would’ve walked away from that situation with no hard feelings.

Kevin interrupted her and said that he didn’t think that Joey would’ve stopped asking. Tricia laughed but didn’t address the comment. She continued her presentation, saying that ReThink helps out in the age of digital parenting. She told the Sharks that it allowed parents to help shape the kid’s behavior by “encouraging positive decision-making both online and off-line.” She ended her presentation by asking the Sharks if they wanted to sit back and wonder what could’ve been, or join with her to help stop cyberbullying forever.

Robert was the first to jump in, asking Tricia if Erica sees the pop-up and then decides to click okay if the message would still get sent. Tricia said that it would, saying that they weren’t taking away anyone’s right to express their feelings or opinions. She claims that the message would still get posted if Erica decided to post it, the app was just giving a little extra time and space in between the feeling and the message. Barbara was up next, asking Tricia if the potential cyber bully had to sign up for the app themselves. Tricia told her that that was a great question, and said that cyberbullies themselves were not the target audience. The ReThink app was targeting parents and educators. Those were the people who were looking for a solution to the cyberbullying problem.

Barbara asked Tricia to tell the Sharks a little bit more about her background as she was curious to how Tricia had come up with the app in the first place. Tricia explained that she was a 16-year-old high school junior who taught herself how to code at the age of 10. Three years previous, she read a news story about an 11-year-old girl that had been cyberbullied for a year and a half before she took her own life. She said the story broke her heart. Someone younger than herself had felt so distraught that she killed herself over a preventable issue. She decided to use her knowledge of technology to help solve the problem. She reiterated that she wanted to use technology for good to stop a problem that technology itself is created.

Barbara told her that she was shocked to learn that Tricia was only 16. She called her so powerful. Robert wanted to know if they had sold anything, and Tricia told him that they had garnered $52,000 from the We Think ReThink educational program. Tricia explains that due to the new state and federal laws, schools were required to have an anti-cyberbullying education. She helped provide them with the ReThink technology on the school devices as well as curriculum to teach in the classroom. She also provided the schools with analytics to show how well the ReThink app was working. Tricia stated that the ReThink app has gotten over 128,000 downloads over nine months. Robert said that the number of downloads that the app has received in nine months was impressive. He said that it was a good idea, but they were challenges.

Robert saw the main issue with the Rethink app is that the user was in control of the experience. He thought that cyber bullies could just click through every time, rendering the app useless. Tricia said that when she originally created the app, she had the same reservations. She conducted a trial of 1500 users and discovered that 93% of the time when the teenagers in the study got the rethink alert, they change their mind. Mark Cuban start barraging her with questions. He asked her what her daily usage was, and Tricia said about 80,000 users per day. He asked her who did all the coding, and Tricia explained that she had been coding since she was 10. Kevin asked her if she was the one who coded it, and Tricia said that she was. Barbara said that she was a tremendous entrepreneurial talent.

Barbara told Tricia that she had a decision to make. ReThink could either be a business, or a charity. Barbara said that if she was faced with that decision, she would make it a charity and start collecting money for charity because it was such a worthy cause. The real estate mogul said that she thought it wouldn’t work as a business, and she went out. Tricia thanked her. Kevin was up next, saying that everyone thought that she was a tremendous talent. He explains that when she took on an investor, she had a new responsibility of making them money. Tricia insisted that she was 100% committed to that. Kevin went out.

Robert told her that while he liked the idea, content filtering technology was not new. He said that he believed in the cause of ending cyberbullying, but he didn’t see ReThink as a business. Daymond asked her what she wanted the money for. Tricia explained that she wanted to hire employees so that they could scale up the app to reflect the amount of interest that they had in it. She continued, stating that she had 1200 schools that were interested in having the ReThink technology downloaded on all of their devices for the upcoming school year. She also said that T-Mobile Europe was interested in having the technology on all of their devices, but she wanted it to be on more than one carrier.

The sharks all looked astonished. Robert asked her if a carrier had really contacted her, and then she turned them down. Tricia repeated what she said, stating that she thought it could be more than one carrier in more than one part of the world. Daymond said that he did see it as a business. He made an offer for $100,000 in exchange for 30% of the business. Lori said that it was a passion of hers, and she also likes an entrepreneur who made the competition think “oh crap she’s up.” when her feet hit the floor. She said that she was willing to offer Tricia the hundred thousand dollars in exchange for the 20%. Lori said that she was not opposed to working with another Shark, and asked Mark if he was still in.

As Daymond sat back in his seat looking put out, Mark sat forward and said that if ReThink was to work as a business, then working with the carrier was the best way to go. He said that that gives the carrier the option to have rethink preinstalled and offer parents a kid-friendly phone. Mark asked Tricia if that was not and she would be willing to consider, and she said that if she had an investor with his expertise she would be able to make those decisions. Mark said that he would be willing to go in with Lori on her deal, which would be her ask for $100,000 in exchange for 20%. Robert told her that she had a decision to make. Tricia took the obvious choice, which was to work with Lori and Mark. They all shook on it.

ReThink Now in 2018- The After Shark Tank Update 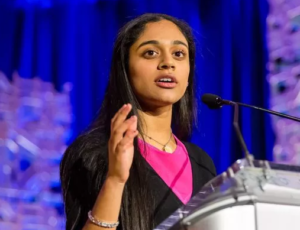 In 2017, NationSwell, a social media company that says it is “dedicated to powering the solutions and innovations that will move (America) forward,” named Tricia one of the five Tech Impact All-Stars. She was also named the Web M.D. Health Hero of the Year. Rethink was featured on major media outlets such as Good Morning America, NPR, the Steve Harvey show, and ABC news. In October 2017, Tricia went to speak at a Japanese tech conference and was able to introduce her app to Japan. In September 2016, ReThink was introduced in a curriculum for Pennsylvania elementary and middle schools by Liberty Museum and its Young Heroes Outreach Program curriculum. It’s clear that Tricia and her anti-cyberbullying app are going places.