David and Phillip were at a pub one day, and a thought hit them – Why does beer taste so much better from the tap than from the bottle or the can? The pair joined forces and turned to science to find a way to bring the freshness of the tap to the home market. They found a way to make the best beer foam – not with CO2, but with soundwaves. David and Phillip ran a successful crowdfunding campaign for Fizzics, quit their job, and headed to the Shark Tank to expand into the markets they wanted to tap. 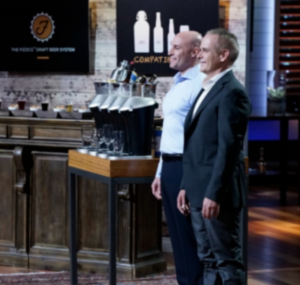 Philip Petracca and David Mcdonald walked out into the Shark Tank and onto the stage. They were the first business to appear on the highly anticipated 8th season of the show. They introduced themselves nervously to the Sharks, and David told them that they were seeking a $500,000 investment in exchange for 4% equity stake in the business. That was a pretty risky move considering most of the Sharks would refuse to get out of bed for less than 20%, depending on the viability of the business venture.

Phillip began the Fizzics presentation by telling the Sharks something they already knew – that beer was awesome, especially when it’s fresh. He asserted that his company would change the way that beer was served, and how it was taken on the go. David joined in, stating that many brewers intended their beverages to be served fresh from the tap. Phillip stated the obvious – that most beers were served in cans and bottles if they were not being handed out at a bar or a brewery tour. Fizzics was here to change all that.

The pair showcased an item that looked like a Keurig for beer. they described it as a portable draft that would deliver better tasting beer than even a brewery would. David claimed that Fizzics could be used with any size container, from a 12 ounce can to a 64 oz growler. Once a container was placed under the spout, the system would begin to pour the beer at a controlled pressure rate without gas, chemicals, or even cartridges that needed to be replaced. It was a pretty amazing claim.

Once the beer glass was mostly full, David demonstrated reversing the motion of the lever, which produced a foam on top of the glass with soundwaves. David insisted that it produced the perfect texture and aroma of foam, and making it better than regular draft beer. Both men made exaggerated excited noises, and the Sharks laughed along. They ended their presentation by asking the Sharks who wanted to try the beer for themselves. Of course, Robert was the first one to ask for a sample.

Each of the sharks tasted the assortment of beer out in front of them, and Mark Cuban made a toast. After each Shark tasted the regular draft beer and the Fizzics draft, they declared the Fizzics to be much smoother and tastier than the regular beer. Robert told the two entrepreneurs that the foam was especially delicious.

David informed him that the foam was the most important part of a typical beer drinking experience. All of the Sharks agreed that the Fizzics beer was hands down better as opposed the regular draft. Kevin O’Leary – aka Mr. Wonderful – told the two businessmen that he was extremely skeptical of the product when they began their presentation, and now he was impressed. They had achieved that much. but I know Kevin was leery of their valuation. He declared it highway robbery.

David backed up his claims by telling Kevin that they had just started shipping product 8 months ago. All the Sharks began groaning, but he interrupted them what the actual sales figure. In less than a year, Fizzics had made 3.2 million dollars. That was enough to impress even  Daymond John.

Kevin O’Leary told them that it wasn’t half bad. Lori started getting into the meat of the financials, asking them how much it cost to make the Fizzics machine. They told her that it retailed for $199 and it costs just $38 to make. Since the Sharks were very easily impressed by margins, this was almost perfection.

Philip told the sharks that they did a campaign on the crowdfunding site Indiegogo, and they surpassed their goal of $50,000 by $450,000. Philip told the sharks that they quit their jobs the day after they hit their goal, and they’ve been running ever since. Robert wondered how the technology actually worked. Almost certainly, the next question would be related to a patent.

Phillip explains that the technology that they used to make the perfect foam for the beer with sound waves, which Robert found particularly impressive. Lori asked about the patent, and she was told that they had three applications out, and they were all related to the utility of the product.

Robert ask them why they were evaluating their business at 12.5 million dollars. Philip explains that they were doing a conservative valuation because of the amount of Interest their product had drummed up during the crowdfunding cycle, as well as the first eight months of sales. When they said that the valuation was conservative, Daymond looked at the camera as if to say “these people are crazy right?” Phillip explains that it was only 1.5 times their net worth for the year. He insisted that they were cash flow positive already, and they had made a profit of $200,000.

Robert said that he had heard enough, and offered them the $500,000 that they were asking for in exchange for 8% equity in the company. Philip said that that was way below market value, and he believes the valuation was where it should be. He said that they had already been offered $2000000 for a venture capitalist, but there is nothing like a Shark Tank investment. Robert laughed, and said that he was making his argument for him.

Kevin O’Leary cut in, and said that they absolutely should value the Shark Tank, but he was the one that can make them the most money. He was fully vested in the wine and food industry, and he claimed that he already had their customer base. He offered the same deal as Robert: $500,000 in exchange for 8%. Kevin claims that he could move way more units then Robert could, or any other Shark for that matter.

Mark Cuban asked what their challenges were. David explains that their challenges and their advantage was the same. They were creating a category, which meant that they were the market leaders, that also meant that they had to create their own customer base. Barbara cut in, stating everything seems too good to be true. She declared them to being untrustworthy, and she went out. Daymond was the next to speak.

Daymond asked the entrepreneurs again why they were here. It was strange for business owners to appear on the Shark Tank when they were already cash flow positive. Philip insisted that they were having some channel issues, and wanted to expand into retail spaces that were currently unavailable to them. Kevin asked for an example of that. Suddenly all of the Sharks were talking at once. In the midst of the chaos, Daymond went out because they haven’t even gotten into their slides, or the real presentation yet.

Lori said that she was interested, and wanted to see what was on the slides. It was a smaller unit that was only capable of making cans or 12 ounce bottles that they believed would be better received in the general retail Market as opposed to specialty stores. Lori told them that it was lucky for them that she was interested because she was the queen of QVC. She believed that the products would do very well with TV sales as they need to explain the product for it to sell. It wouldn’t do well just on the Shelf without an explanation of what it was. Lori offered the same deal as everyone else,$500,000 in exchange for 8% equity in the company. Philip and David certainly had a choice to make.

Turned out the Sharks weren’t done yet. Mark Cuban made an offer of $800,000 in exchange for 10% of the business and offered for Lori to come in on the deal. Philip made a counter-offer and asked if they wanted to get in on the entire round of their investment. It sounded like he was about to ask for 2 million dollars. That was most likely a mistake, the Sharks didn’t like it when entrepreneurs got too big for their britches. Let’s see what happens…

Fizzics Now in 2018 – The After Shark Tank Update 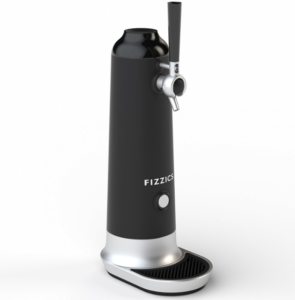 Surprisingly, Mark and Lori took the deal for $2,000,000 at a 16% valuation of Fizzics. The four of them shook on it, and the two entrepreneurs walked off the stage looking triumphant. Since their episode aired, Fizzics has appeared on many different selling platforms. They produced the smaller machine, now called the WayTap that only uses cans and 12-ounce bottles. It appeared on QVC for $99, which is a full $100 cheaper than the larger version. It’s also much more portable than the original.

Fizzics has achieved their goal of expanding their selling channels. Their devices are now for sale in Target, Best Buy, Brookstone, on Amazon, and many other places – including Bed, Bath & Beyond. They have been reviewed in various famous magazines, and on many websites such as Yahoo! Tech and cNet. The Fizzics beer making machine has been called nothing short of a miracle. Not too bad for two men from the Jersey Shore.